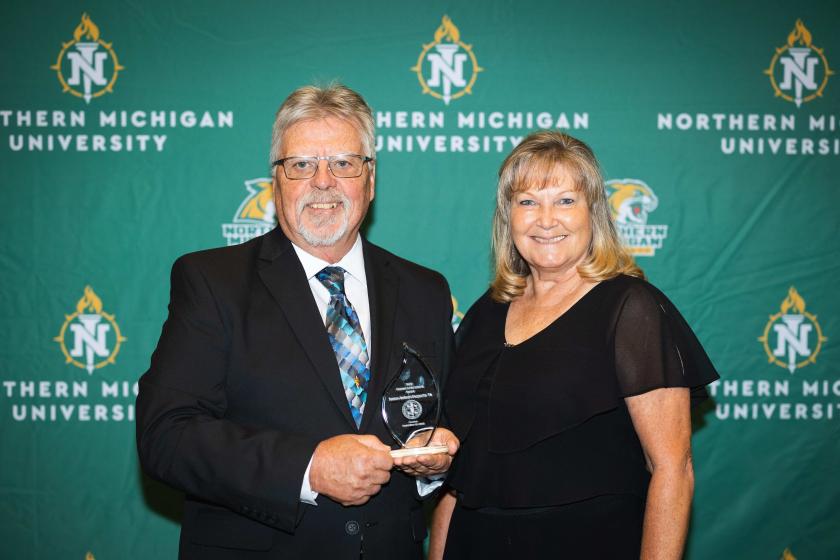 Jim Paquette of Negaunee developed an interest in history and archaeology at a young age, in large part because his paternal grandfather instilled pride in the family's French Canadian-First Nation Métis ancestry and traditional lifestyle. As he grew older, Paquette wanted to learn more about his family's history in the region. He read and copied volumes of material from the library at Northern Michigan University, his alma mater, and began searching for and locating early cultural sites where various ancient stone and copper artifacts helped to reveal the story.

This led to an avid passion for more discoveries and a partnership with NMU faculty, both of which continue today. The 1974 NMU graduate was honored during Homecoming weekend as the 2022 Alumni Achievement Award recipient.

Since May of 1984, Paquette has been conducting an ongoing archaeological survey project in the central Upper Peninsula. One of his most prominent revelations was in 1987 at the 10,000-year-old Gorto Site on Deer Lake in Ishpeming, where he and John Gorto—also also an NMU alumnus—found a cache of more than 30 Paleo-Indian spear points in a small area.

“That discovery shook the archaeological world,” Paquette said. “At the time, we were trying to prove that early people that are referred to as Paleo-Indians lived in the U.P. since the end of the Ice Age. There was a lot of doubt among professional archaeologists that this was true and people told us that we wouldn't find anything, but we did.

“We've since found other Paleo Period artifacts, many even older than what we found on Deer Lake.  But that discovery opened the door to professional inquiry into the earliest part of our Upper Peninsula pre-history. NMU's Dr. Marla Buckmaster and then-NMU student John Anderton led our 1987 excavation of the Gorto Site cache.”

Another highlight is the Goose Lake Outlet #3 site, an early Anishinaabe family's winter camp/hunting site. It traces back to the pre-1650 Protohistoric period, when European-manufactured goods such as colored glass beads, axes and knives were first being traded/gifted to Indigenous peoples living in the Lake Superior region, but before any historic records of such contact exist. Buckmaster and Anderton headed the first excavations of this site as well. Paquette himself has led the most recent 2021 and 2022 excavations at the site, using NMU's equipment with the assistance of Professor Scott Demel.

“We've dated the site to the 1630s time period, which was prior to the Europeans' arrival in the U.P.,” Paquette said. “It represents the earliest contact between Native peoples living in this region and the earliest of the French explorers and traders who brought trade goods with them. It is also probable that some of the trade goods got here from ‘down the line trade' among eastern and western Great Lakes Native populations themselves.

"We found moose, beaver and porcupine bones, stone arrowheads, brass finger rings from the French, and an incredible array of glass trade beads. When it comes to searching for signs of my French and Native ancestors, this site really nailed it. There's a powerful spiritual connection I feel when I'm there.”

Paquette has several related professional archaeological publications and numerous public presentations to his credit, yet archaeology was neither his academic major nor his career. He enrolled at NMU with the intent of becoming a history teacher, but was convinced by an NMU department head lamenting the slow job market to change his major to social services and minor in history.

“That was one of the greatest things that ever happened to me,” he said. “I had incredible professors who taught me about human beings and how to value, treat, and deal with them. I also learned how to communicate effectively through writing and speaking, and how to do proper research and ‘always' get my facts right. So much of what I have achieved throughout my life I owe to what I learned at Northern.”

With scholarships, Paquette enjoyed a free ride at NMU, which was a relief to his financially strapped family. But beyond the monetary incentive to stay close to home was personal motivation. He didn't have to leave his high-school sweetheart, Karen, who became his wife before his senior year at NMU.

Paquette said he went to college so he wouldn't have to work in the local iron ore mines, but after graduation, the mines offered more than double the starting pay of a social worker, plus full benefits and a good retirement plan. He planned to give it a month before transitioning to his field of study. Instead, he launched a 35-year career with the Cleveland-Cliffs Iron Company.

“The skills I learned at Northern gave me a tremendous advantage in a mine setting. I started as an hourly employee and was the first college-educated iron ore miner to ever take one of the union jobs. I sat across from senior management when I was only 24 years old to negotiate local issues and argue miners' grievances. I also became editor and writer of the first union newspaper at the Tilden Mine. But mine safety was always my first concern and I dedicated myself to get every miner home safe and sound to their families at the end of every shift.

“When I was approached to join management after working for 17 years as a rank'n file employee, I accepted in order to help others within the management group who wanted to change and improve the culture at the mines. We introduced computers and other modern tools such laser alignment; improved vacation leave and work scheduling and conditions; and brought on new equipment to promote miner safety, which continued to be my passion. The successful root cause analysis accident/incident investigation system I helped to develop and manage at our Cliffs Michigan Mining Operations is still being used.”

Paquette's 2009 retirement allowed him to turn more attention to historical research and archaeology. He has also channeled his union activist spirit toward advocating for human rights on behalf of individuals mistreated because of their gender, religion or ethnicity.

Jim and Karen will celebrate their 50th anniversary in June. Their four daughters all graduated from Northern with honors: Nicole Hyttinen, Jill Miller, Jodi Niemi and Kerri Smith. 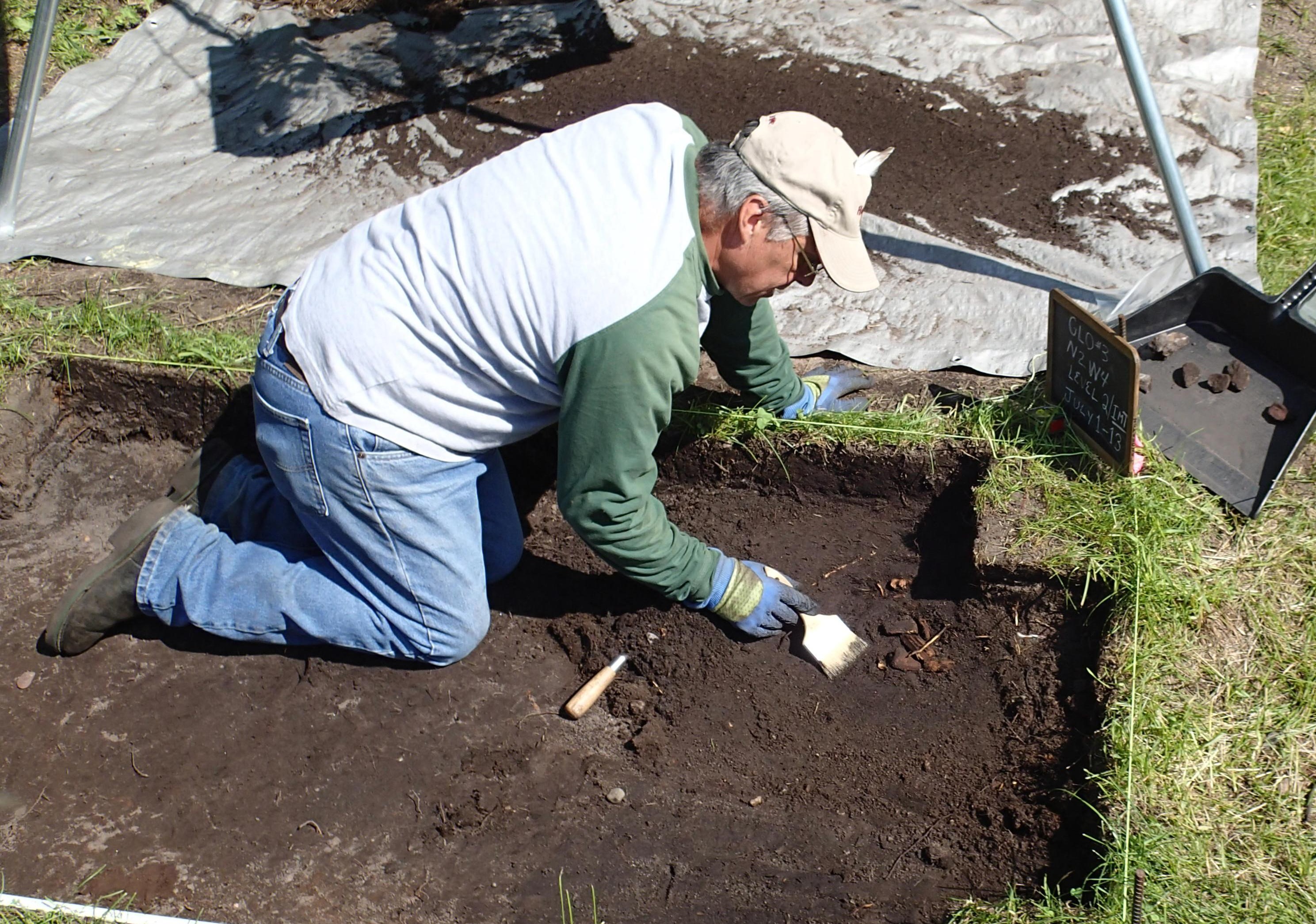 Paquette at work on an excavation.
Prepared By