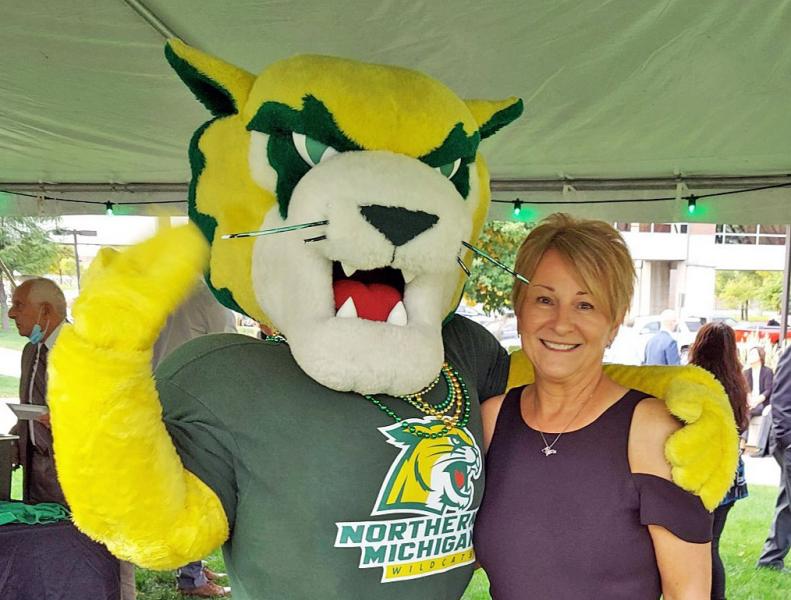 “All I really needed to know about teaching kindergarten I learned at Northern.” Northern Michigan University Alumni Achievement Award recipient Susan (Hlavaty) Meier uses that twist on the title of Robert Fulgham's best-selling book, All I Really Need to Know I Learned in Kindergarten, to summarize how NMU prepared her for a 32-year career in the classroom. The 1987 graduate retired last year from South Elementary School in Ithaca, Michigan.

Meier displayed two rules on a wall in her classroom: work hard and be nice. Her belief that character education is as important as academics has resulted in a generation of high-achieving, lifelong learners. She is known for implementing best practices in early childhood development and instilling in young children the importance of giving back to their community through monthly grant-funded service projects and random acts of kindness.

The most popular project was Books for Babies, which Meier founded more than 20 years ago to promote early literacy. She and her students raised $59,000 to give books to newborns at the local hospital. More than 14,000 babies received their “first book” from Meier's kindergarten. Her Everybody Deserves a Birthday Cake project inspired the Connect Marquette organization to implement the project as an annual event.

Other projects included hosting a bagel breakfast for bus drivers and crossing guards; providing first responders with stuffed bears to distribute to children at accident sites; organizing and participating in a fall festival with senior citizens at the commission on aging; presenting thank-you cards and lunch gift cards to firefighters and police officers; and making more than 100 “Be Kind” posters that were put in all of the businesses in the community.

“First we built a sense of community and mutual respect in the classroom,” Meier said. “In September, we talked about being aware of opportunities to help someone or make them smile through random acts of kindness. Then we would spread that into the students' homes with challenges to show kindness to family members."

Eventually, the focus branched out to the community, with her class giving presentations at the city council meeting. She ended the year with an Art for Peace project, in which her students connected with classrooms from other countries.

"It really did become second nature for them to think of others and be an active community member making a difference. My education, experiences, and especially the people gave me the confidence to create a unique classroom environment for active, hands-on, meaningful learning. I was a little outside the box as far as that goes.”

Meier said she set up a nature-centered classroom with birch trees, log benches, a pond rug, natural materials such as tree slices and rocks instead of flash cards and name tags, and student-made posters on the walls. A picture of the Marquette Lighthouse on her smartboard and nature music playing in her classroom provided a welcoming, calm environment where she said everyone felt accepted, cared for, and had a sense of belonging. She appreciated the reminders of her time at Northern because it had such a positive impact on her life and career.

“Just as my former students will tell me they'll never forget a particular thing I said or did, I have people like that from when I was a Northern student. One of my most difficult courses was taught by [the late] Dave Goldsmith. He was really tough, but he was one of my favorite professors because he challenged us and told us we were capable of more than we realized.

"That carried over into my teaching because I had very high expectations of my students for academics and character, and they respected that, even in kindergarten.”

Meier spent four summers working with Marquette Parks and Recreation teaching arts and crafts to children. “I was more like a counselor, listening when they needed to talk about something or helping them solve a problem.” she said. On a personal note, during one of those summers, Meier met her husband, Randy (‘82). They have been married 32 years, live in Riverdale, Mich., and are parents to three "amazing" sons.

She is an active member of the Michigan Association of the Education of Young Children and a longtime presenter at the state conference. She continues to promote reading and mentor other teachers and as a part-time literacy coach with Carson City-Crystal Area Schools.

“It wasn't until I went to Northern and met with my academic counselor that I decided on a major,” she said. “I don't remember that person's exact words, but it was something like this: We find our calling in life by pursuing something we enjoy, something we're good at and something that will give us purpose. For me, that was becoming a teacher because I was always interested in working with children. Looking back after 32 years of teaching, that was the best decision I could have ever made.”