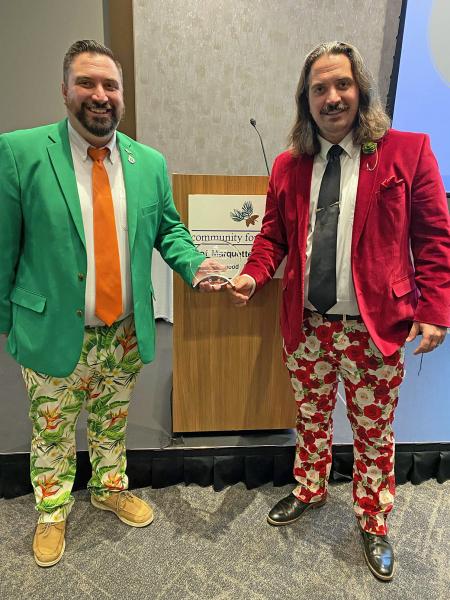 Bill (left) and Pat Digneit with their award.

Northern Michigan University alumni and twin brothers Bill and Pat Digneit received a 2021 Catalyst Award from the Community Foundation of Marquette County as co-owners of the local business, Double Trouble Entertainment. Four Catalyst Awards were presented to individuals, organizations and businesses for helping to "build community through volunteerism or philanthropy and inspiring others to do the same."

The Digneits accepted their business' award at the foundation's annual celebration in late September. Double Trouble is a Michigan-based entertainment and production company focusing on nightclub design and outdoor events.

Bill Digneit graduated in 2008 with a double major in speech communication and theater/entertainment arts. He works full time at NMU, overseeing the Theatre and Dance Department and serving as co-director of NMU's new SISU: The Institute for Innovation. He is the current production manager for the annual LDI Conference program (including LDInstitute and LDIntensives) in Las Vegas, and also for LDI Mexico.

Pat Digneit completed an associate degree in food service management in 2011. He is also co-owner of DIGS Street Food & Spirits (brother Bill is a partner). Pat runs front-of-the-house operations at DIGS alongside his wife, Alyssa Digneit.