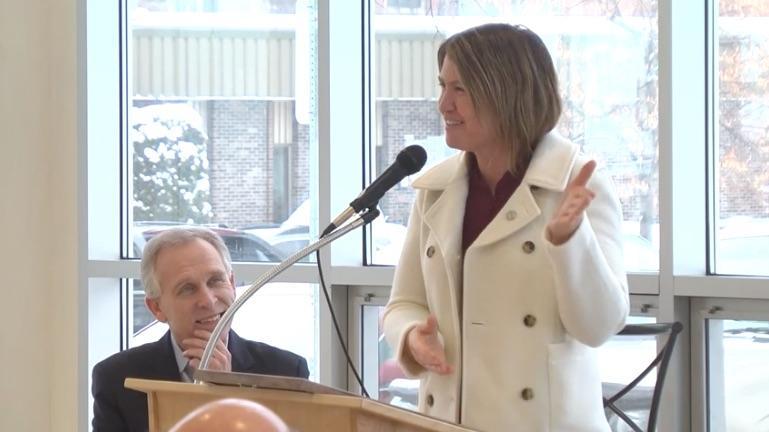 Ruge and Cambensy at the event (still from abc10up.com story)

Two NMU alumni were involved in a recent Upper Peninsula birthday celebration held at the Marquette Regional History Center. State Rep. Sara Cambensy introduced a House-adopted resolution commemorating Dec. 14 as the 183rd birthday of the U.P., while Mark Ruge gave a presentation on the “Frostbitten Convention” held on that date in 1836, which ensured that Michigan's boundaries would include the entire Upper Peninsula.

According to the resolution, the decision was preceded by a dispute between officials in the territory of Michigan and state of Ohio over the rightful claim to 500 square miles of land known as the Toledo Strip. Federal legislation granted the strip to Ohio, leaving Michigan with the 16,500 square miles of pristine, resource-rich Upper Peninsula.

The final condition for Michigan becoming the 26th state was that elected delegates in the territory agree with the proposed boundaries. The plan was rejected at the first gathering, but unanimously approved at the subsequent “Frostbitten Convention,” named for the frigid temperatures that day in Ann Arbor.

Ruge gave a presentation on the convention at this fall's Sonderegger Symposium, an annual event hosted by the Center for Upper Peninsula Studies and Beaumier U.P. Heritage Center at NMU. It was at a previous symposium that more than 100 attendees agreed to a resolution declaring Dec. 14 as the U.P.'s official birthday. Cambensy achieved that, but said she is working to take the legislation a step further by making the date an official state holiday.

Cambensy is serving her second full term representing the 109th House District, which comprises Alger, Luce and Schoolcraft counties and part of Marquette County. She graduated from NMU with a bachelor's in education and a master's in public administration, for which she was named outstanding graduate.

Ruge graduated with a bachelor's degree from NMU in 1980. The Menominee native Mark Ruge is a lawyer in the public policy and law practice group at the global law firm K&L Gates. He formerly served as chief of staff to Michigan Rep. Bob Davis. Ruge also wrote a story on the Frostbitten Convention for the November issue of Marquette Monthly.