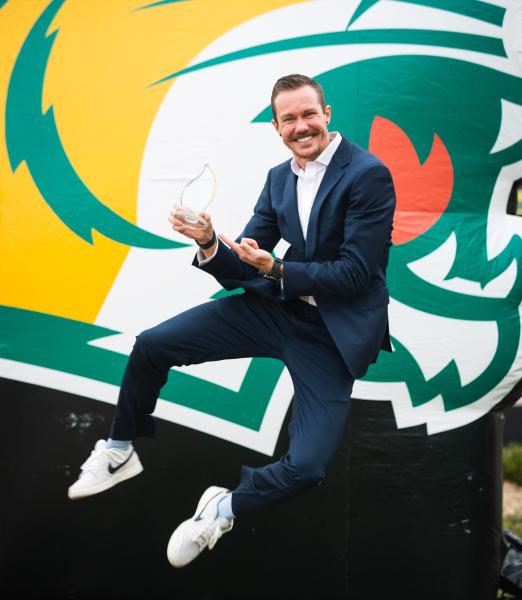 Northern Michigan University 2003 alumnus Chris Mosier of Chicago is a trailblazing transgender athlete who has been a catalyst for policy change and a staunch advocate for inclusion in and beyond sports. Abiding by his motto, “Be who you needed when you were younger,” Mosier is a dedicated mentor to transgender and nonbinary youth, a highly regarded speaker and a leading grassroots organizer against the current wave of anti-trans legislation across the United States. For these reasons and more, he was selected as the recipient of NMU's 2022 Alumni Service Award.

“I think it's amazing to be recognized in this way,” said Mosier, who earned a bachelor of fine arts degree in 2003. “It's also wonderful to return to campus feeling I'm the person I was always meant to be. When I was a student at Northern, I definitely struggled in terms of finding my place in the world because I didn't comprehend that I was trans, and there weren't many out people in my social circles when I was there.”

As a protective mechanism, Mosier said he threw himself into his Northern experience, keeping busy with intramural sports, residence hall council and other organizations so he would not have time to think of his identity, develop close relationships with others or have to talk about himself too much.

“Even putting on the Wildcat Willy mascot costume allowed me to be involved in sports, but with the gift of anonymity,” he said. “It was all about building walls to help me avoid potentially awkward moments. Don't get me wrong—I really enjoyed my overall experience at Northern and it prepared me to interrogate some of those ideas about my identity. But I didn't fully explore and embrace my authentic self until after I left.”

Along with increased self-awareness, Mosier began to recognize the meaningful value of using sport as a vehicle for social change. His credibility in that arena received a boost in 2013, when he created the website transathlete.com, a resource for students, athletes, coaches and administrators with information about trans inclusion in athletics at various levels. He has also helped teams, high school athletic associations and professional sports leagues create gender-inclusive policies.

In 2015, Mosier became the first openly trans man to earn a spot on the U.S. men's national team and was instrumental in getting the International Olympic Committee to revise its policy on transgender athletes. The following year, he became the first trans man to compete against men in a World Championship race under the new rules. He is a six-time member of Team USA in sprint and long-course duathlon, as well as sprint triathlon. In what he considers one of his greatest achievements, Mosier became the first known trans athlete to compete in the Olympic Trials in the gender with which they identify in 2020. Mosier's event was the 50k race walk, a sport that garnered him two national championships.

“Race walking is really rough on the body,” he said. “I managed to hurt myself in that, even though I competed in triathlon and duathlon for more than 10 years with no injuries. But I am still actively competing in duathlon and possibly race walking. The race season is over, so we're in training mode for the National Championships next year.”

Mosier's trailblazing feats have elevated his profile. He is a Nike-sponsored athlete who was featured in a commercial that debuted in prime time during the Rio Olympics and in the shoemaker's BETRUE campaign. He also was the first trans athlete to appear in ESPN The Magazine's body issue. Mosier is the executive producer of the Emmy-nominated Hulu documentary, Changing the Game, and was featured in his award-winning short documentary, The Chris Mosier Project. Other past honors include Outsports' Person of the Year, Advocate Magazine's “40 Under 40”, Compete Magazine Athlete of the Year, and Mosier's induction into the National Gay and Lesbian Sports Hall of Fame.

Mosier has parlayed his visibility into other opportunities to share his story and educate people on ways to increase inclusivity. He travels the country for speaking engagements on LGBTQ topics. Some of his stops have included ESPN & Disney, JP Morgan Chase and the NCAA. He previously served as vice president of program development and community relations for You Can Play and executive director of GO! Athletes. His immersion into advocacy work required Mosier to step away from his previous full-time job in residence life at a university.

“I went into higher education because of my amazing experience with student life at NMU. But I was on call for 11 years of my life, and it was especially intense at the end. It just started taking its toll and I realized I wanted to give my full attention to helping people and instigating positive change. In my own experience, I discovered that finding my earned voice, owning the power of my identity and figuring out how I can show up in this world every day in wholeness of who I am and not have to hide that makes me a much better person and colleague. My goal is to help others achieve that for themselves, and to demonstrate that creating inclusive spaces makes everyone better.”

Mosier and other alumni award recipients were honored during NMU's Homecoming weekend, Sept. 23-24.