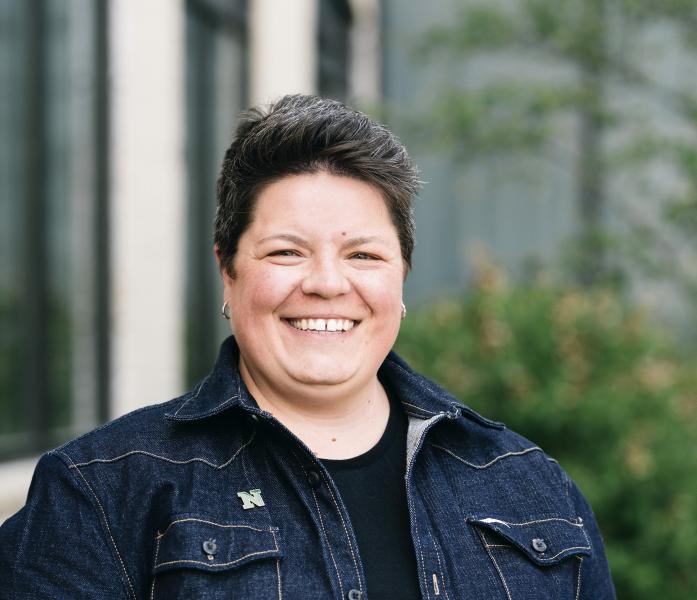 “Most of our students are local, but I've noticed a lot call this campus home even though they're commuting,” she said. “They feel connected and included. Our approach is that we take care of each other. That's the core of it for me. Thinking about individual students and helping them through difficult times is important to keep them safe and the community safe.

“Some people think of the student conduct person as ‘the hammer.' I just don't approach my work that way. I recognize that people acting out or not feeling confident about their situation can impact their behavior. It's all about meeting students where they are, supporting them in their goals and challenging them to be a better version of themselves.”

Blair said her team has to be creative in how they engage students with increased responsibilities off campus related to full-time work and family demands. They have managed to more than double the number of student organizations in the last few years.

The onset of COVID-19 increased Blair's involvement in service and activism. A November 2020 survey indicated 46% of GRCC students were struggling with housing insecurity, including trouble paying rent or utilities and couch surfing at friends' places, and 11% spent at least two nights one month homeless, either outdoors or in their cars.

More than 30% were struggling with food insecurity, which prompted Blair to lead her team to establish a wider-reaching campus food pantry, with a larger location, refrigeration and freezing capabilities for produce and meat, and enough food to supply students in need. The GRCC Food Pantry also has become a hub of community activity, volunteerism and learning opportunities for students and community members.

Under Blair's leadership, the GRCC pantry partnered with local farms and organizations to strengthen community relations and provide unity in an otherwise disjointed and unprecedented time. Blair recently led the team that secured a grant for nearly $50,000 to maintain the GRCC pantry.

Blair said she consistently applies her two NMU degrees—a bachelor's in psychology and master's in training, development and human performance—to her career. She also carries forward lessons gleaned from impactful people and experiences from her time as a Northern student.

“I was having too much fun my freshman year trying to make friends,” Blair recalled. “My RA [resident adviser] in Halverson Deja Vu house, Dusti Young, knocked on my door and said, ‘You're more capable than what you're doing right now.' She put applications for summer orientation staff and the Student Leader Fellowship Program on my desk, told me to fill them out and personally delivered them. I got both and that gift really transformed my path. SLFP helped me look outside of myself and think about how I can serve others.

"Dusti was carrying out some of the things she learned from [the late housing director] Carl Holm and [retired student activities director] Dave Bonsall. Those two had a huge influence on me as well. They demonstrated the value of building relationships in a genuine way and helping people feel they can be a part of something meaningful.”

Prior to moving to GRCC, Blair was employed at NMU for more than 10 years in various roles. She began as a resident director in Gant Hall before transitioning to the Academic and Career Advisement Center, where she served as the coordinator of academic proficiency and later director of New Student Orientation.

She also served as the assistant dean of students at NMU until May 2016. In that capacity, Blair advised student government, provided leadership for the student conduct program and created a new program for NMU's first-generation college students. She said she is especially proud of the latter.

Originally from Quincy, Ill., Blair enjoys spending time with her family and friends, photography and fly fishing. Not surprisingly, she has expanded her personal fishing hobby into a volunteer opportunity. Through Trout Unlimited, Blair helps Girl Scouts learn how to fish, tie flies, and explore the entomology of streams.