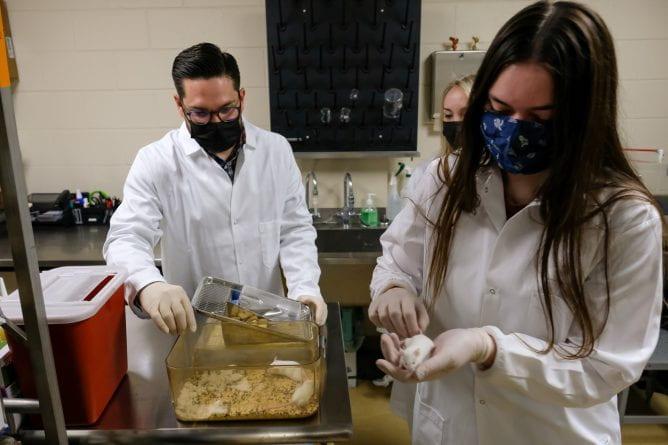 Hillhouse (left) with students in his lab (UWGB photo)

NMU psychology alumnus Todd Hillhouse ('09 BS, '11 MS) is already making his mark as an assistant professor at the University of Wisconsin-Green Bay. He joined the faculty last August and opened a new Pain and Addiction Neuropharmacology (PANE) lab in November. Hillhouse works with a half-dozen student researchers to develop novel treatments for pain management, addiction and associated depression.

A UW-Green Bay feature story highlights Hillhouse's progression from academic uncertainty to a doctorate in biopsychology, and his professional role mentoring students. He said college wasn't on his radar until his senior year of high school because no one in his family had attended

“I was taking my gen ed courses and discovered a love of psychology,” stated Hillsong in the story. “I discovered Northern Michigan University at a college fair there, so I applied to NMU and several colleges. I was accepted at several other schools, but I picked Northern Michigan University because it offered the biggest change in scenery from my home in Southern California.”

Hillhouse finished his bachelor's degree in psychology and master's in experimental psychology at NMU before earning a doctorate in biopsychology from Virginia Commonwealth University.

Read the full story and watch a video about Hillhouse's PANE lab here.