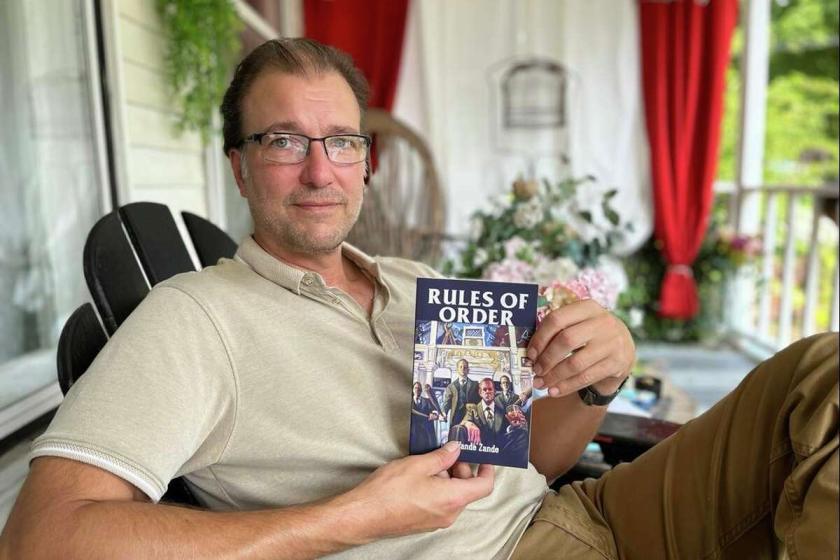 Northern Michigan University alumnus Jeff Vande Zande will give a reading from his newly published fifth novel, Rules of Order, at 7 p.m. Thursday, Nov. 10, at Peter White Public Library. The 1993 graduate had previously published a short story collection and was inspired to expand upon one of the pieces contained within it. Soon after Vande Zande began the project, his writing intensified during the early stage of the pandemic. He managed to complete a book-length draft in only six weeks.

Rules of Order has been described as “a fresh and welcome take on the dystopian novel.” It follows community activist Harvey Crowe, who lives in what could be the last remaining high-rise building in a wrecked city. Cracks in the ground-floor apartments are appearing exponentially. The building's structural strength can't possibly hold the load it bears. Crowe attempts to inform tenants on the upper floors that the weight of their possessions could bring the entire building down.

Working with the Anti-Collapse Trust, Crowe encounters obstacles to his message. These include indifferent tenants, his self-doubt, hostile security guards, and a corrupt co-op board chair. Even as Crowe makes meaningful alliances with other influential tenants, he can feel the way they are working against a ticking clock. With time running out, he and his militant colleague carry out a desperate plan to save what might be the city's last habitable space.

“Within one story, one building, Vande Zande manages to go beyond what is expected, bringing together elements of mystery, romance, action, environmental awareness, and political intrigue, all told with a clean and effortless prose that keeps the pages turning,” wrote Tomorrow Music author Pete Stevens in a review. “This book is a call to action, with a protagonist worth cheering for, and readers who want to be shook from their slumber would be well advised to take the ride.”

Vande Zande teaches fiction and screenwriting at Delta College in mid-Michigan. His late father, John, was also an educator; he served on the NMU English Department faculty for more than 30 years.

Rules of Order was published by Montag Press. Vande Zande's short story collection, The Neighborhood Division, was published in 2020. It takes readers down the shady lanes of the American neighborhood. The stories were written over a five-year period. Upon realizing that they thematically explore the struggle between acting for oneself and acting for the greater good of a given community, Vande Zande decided to assemble them into one collection.

“I believe our most honorable impulse is the recognition that there are suffering people that could use our help,” he said in a previous story. “This noble compulsion often bumps up against the natural instinct of looking out for and preserving the self... the self-preserving instinct that says, ‘Don't get involved.' It's within this grey area of existence that my characters—probably like all of us—truly struggle. Such themes have often held interest for me because they are struggles I see within myself and in people close to me.”

Vande Zande was profiled by the Midland Daily News in advance of a book launch event for Rules of Order. Read the article here.