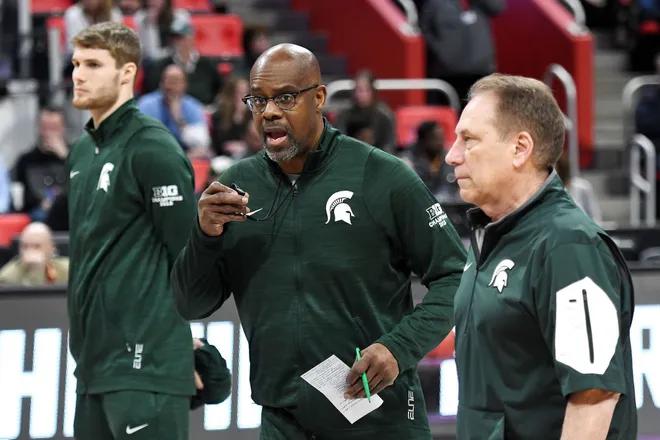 Garland (center) left his spot on Izzo's bench for a period this past season while his son recovered from heart surgery in Cleveland (photo by Nick King/Lansing State Journal).

NMU alumnus Mike Garland ('78 BS), who has served as an assistant coach for his former Wildcat basketball teammate and longtime friend Tom Izzo, is retiring after 22 seasons with the Michigan State Spartans.

“I've been blessed in my life to be provided many great opportunities, but among the best has been the opportunity to interact with the great young men who have been part of the Michigan State men's basketball program and to do so alongside my friend and loving brother that I can't say enough about, Tom Izzo, along with other fellow coaches during my time here,” Garland said in an MSU basketball statement.

Garland and Izzo roomed together on the road when they played basketball for NMU in the 1970s.

“Words can't truly express what Mike Garland means to me,” Izzo said in a statement released Thursday. “We've been friends since we met the first night in college and basically have lived the rest of our professional lives together. To say he's just my friend doesn't even scratch the surface of our relationship. He's my brother for life.”

Garland had no intention of coaching after college. The Detroit Free Press reported that he worked in the landscaping and road contracting businesses before one of his former high school coaches and mentors implored him to lead the junior varsity boys basketball team at Belleville High School. Garland agreed to one year, but has been involved in the sport ever since. He was head coach of the varsity team when Izzo tapped him to join the Spartans staff in 1996. Aside from a brief stint coaching Cleveland State, he has been on the MSU bench ever since.

According to an article in The State News at MSU, Garland helped lead the Spartans to the 2000 National Championship, seven Final Fours, 20 NCAA Tournament appearances, six Big Ten Tournament Championships and 10 Big Ten Regular Season titles. Garland also coached 18 Spartans who were drafted into the NBA, with six players selected from 2000-02.

“There have been a lot of successful moments on the court here and that's what Tom has built, one of the best college basketball programs in the country,” Garland said in the statement. “It's been an honor to be a part of those championships and Final Fours and to see so many of our players go on to play professionally. I've been just as proud to see so many of our players have success in the business world and to become fathers with wonderful families.”

Garland told the Free Press that his desire to spend more time with family contributed to his decision to retire. Read the related feature story here.