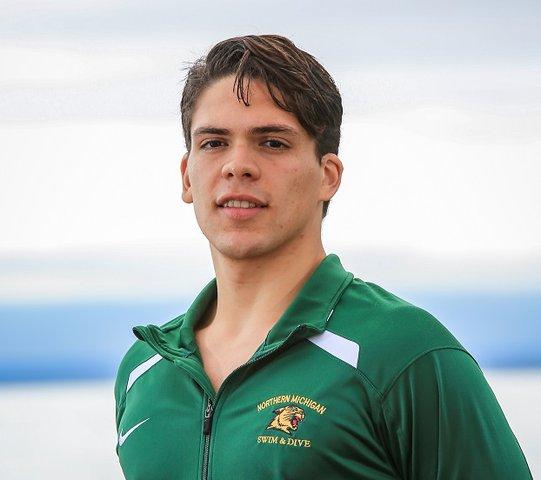 Former Wildcat swimmer and NMU alumnus Arnoldo Herrera departed Sunday for Tokyo, where he will represent his home country of Costa Rica in the Olympics. The December 2019 electrical engineering graduate will compete in the 200-meter breaststroke.

“It is an incredible feeling; going to the Olympics has been a dream that I've strived toward for as long as I can remember,” Herrera stated in an email interview. “Now it's finally real. As an Olympian, I hope to be an inspiration for many kids in Costa Rica because they, too, are capable of making their dreams come true.”

"The whole Wildcat Swim and Dive family is very excited for alumni swimmer Arnoldo Herrera,” said NMU Head Coach Heidi Voigt. “When we recruited Arnoldo, his goal was always to be on the Olympic team representing his Costa Rica. He was a very dedicated athlete, student and team member here at NMU. We will all be watching July 27th for his 200 breaststroke race."

Herrera has been a member of the Costa Rican national team since 2009. He placed third in the 200 breaststroke at the 2013 Central American Games and participated in the FINA World Junior Swimming Championships, FINA World Championships and the 2014 Youth Olympic Games. Even as a member of NMU's team, he swam for his country during university breaks.

“My time at NMU was amazing,” he stated. “My first year was the start-up year for NMU's men's swim and dive team and because of that, they had recruited men from all over the world. I had never before experienced such a fun team atmosphere. I was able to grow as an athlete, a teammate, and an individual.

At NMU, I had the opportunity to become even more involved with the community due to my role in the All Nations Club. I made many friends and even met my girlfriend there. So, if I had to choose one word to describe my experience it would be ‘amazing.' I will be forever grateful to NMU and coaches Heidi Voigt and coach Matt Williams.”

As a Wildcat swimmer, Herrera earned a varsity letter from 2016-19. His achievements included NCAA All American in 2018, and both NCAA team member and GLIAC finalist in 2017-19. During the 2017-18 season, he had 11 first-place finishes, set a school record in the 50-yard backstroke and took third in the 100-yard breaststroke at the GLIAC Championships. In 2016-17, Herrera took silver in the 200-yard medley relay and bronze in the 400-yard medley relay at the GLIAC Tournament. He also received the Bob Laughna Dedication Award in 2018.

When he is not training or competing, Herrera is a full-time student pursuing a master's degree in engineering of medical devices at Costa Rica Tech. He plans to become a professional in the field, a prominent sector of the country's economy.