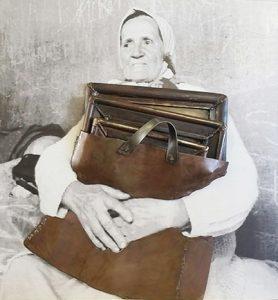 An exhibition that symbolizes the story of millions of refugees worldwide will open Friday, Aug. 30, at Northern Michigan University's DeVos Art Museum. Israeli artist Orna Ben-Ami will give a talk at 6 p.m. An opening reception for her "Entire Life in a Package" exhibit will follow from 7-9 p.m.

Sponsored by the Michigan Council for the Arts & Cultural Affairs, the exhibit portrays the “life packages” full of the hopes and pains that refugees carry. The objects that people take in each package represent their identity and sense of belonging, their memories and hopes for the future.

Born in Israel in 1953, Ben-Ami joined the service at Israel Defense Force in 1971 and became the first female military correspondent for the Army Radio station. After her military service, Ben-Ami became a reporter and news editor for the Israeli Broadcasting Authority radio station, and studied International Relations and History at the Hebrew University of Jerusalem. Ben-Ami shifted her focus to physical material when she started to learn gold and silversmith methods at the Jerusalem Technological Center. Between 1990-92 she studied sculpture at the Corcoran School of Art in Washington, DC, and her education continued at Tel Aviv University, where she studied Art History.

“Artists have to donate their part, through their artistic skills, for designing a better future,” said Ben-Ami.

The exhibit runs through Nov. 8. DeVos Art Museum hours are 10 a.m. to 5 p.m. Tuesday and Wednesday, noon to 8 p.m. Thursday and Friday, noon to 6 p.m. Saturday and Sunday.