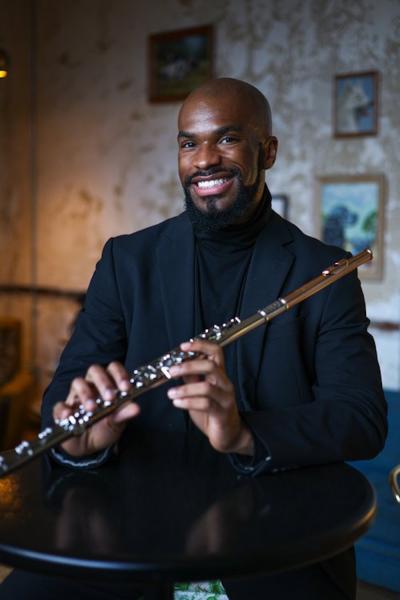 Flutist and educator Adam Sadberry will be accompanied by pianist Wynona Wang for a concert on "Togetherness" on Monday, Oct. 17, as part of Northern Michigan University's Siril Concert Series. Both are award-winning musicians. The event begins at 7:30 p.m. in Reynolds Recital Hall.

Together, the musicians will illustrate connection, embodying how music and life reflect each other, and the foundational quality of sharing. Tickets to the concert are $12 for the general public and free for NMU students and children younger than 12 years of age. They can be purchased at www.nmu.edu/tickets.

During his NMU residency, Sadberry will also participate in the following events, both open to the public and held in Reynolds Recital Hall: a flute masterclass at 1 p.m. Friday, Oct. 14; and a presentation titled "Using Your Identity to Create a Relevant Voice in Music" at 11 a.m. Monday, Oct. 17.

Sadberry is a winner of Concert Artists Guild's 2021 Victor Elmaleh Competition, and is "paving a distinctive career with his citizenry, creativity and vibrancy both on and off stage." His upcoming concert engagements include debuts with Kaufman Music Center, Chamber Music Detroit and Newport Classical.

Wang was selected as First Prize winner of the 2018 Concert Artists Guild International Competition, along with the 2017 Wideman International Piano Competition in Louisiana. She was also awarded the 2019 “Charlotte White” Career Grant by the Salon de Virtuosi in New York City.