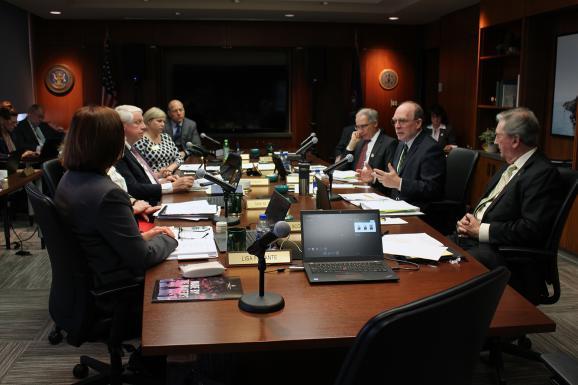 Erickson summarizes the SRA draft report at the board meeting

The Northern Michigan University Board of Trustees today received a draft of the Strategic Resource Allocation (SRA) report from the implementation task force. The SRA project aligns with the university’s strategic plan by identifying opportunities for transformational change and reallocating resources to implement them. Beginning last year, it reviewed more than 600 academic and support programs campus-wide. The draft report extends beyond the individual program summaries to recommend several transformation initiatives.

“I think this project has had a real impetus in helping our campus realize the significant opportunity to shape Northern's future in ways that continue to move us into the ranks as one of the nation's premier rural universities,” said NMU President Fritz Erickson.

Academic initiatives include enabling NMU students to diversify their experience by acquiring knowledge and skill sets from multiple areas that will equip them for an ever-changing workplace. As a starting point toward that goal, the implementation task force recommends two actions: requiring fewer credit hours for majors and bachelor’s degrees; and discontinuing the minor as a graduation requirement, though students would still have the option to choose one.

A second initiative would replace the associate of applied science in general university studies, with its 62 concentrations, with either an associate of arts or associate of science general studies degree. Remaining recommendations include reviewing the demand for and alignment of all secondary education programs; creating a new Honors College and a new College of Graduate Studies and Research; and restructuring academic organization to increase synergy and streamline processes.

“It’s been a tremendously good process and, for me personally, very educational,” said Board Chair Robert Mahaney. “I’ve come to learn and appreciate so much more about both the academic and support sides of the university. We’re excited to see this move forward to the next chapter and begin the implementation process. This reallocation and investment in new, innovative programming is going to help us achieve the mission and vision of the university. Great job to everyone involved; let’s move forward with it.”

Vice chair Steve Mitchell added, “An enormous amount of time was spent by a large number of people to put this together. It was a huge project and I just want to say we’re aware and appreciative of the hard work that so many put into it.”

Campus feedback on the draft is being accepted from faculty, staff and students through Jan. 20. A final report will be submitted to the NMU Board of Trustees for approval in May.

In other action at today’s meeting, the board:

-Agreed to rename three campus facilities. Edgar L. Harden Learning Resources Center will be renamed Elizabeth and Edgar Harden Hall and called Harden Hall. The New Science Facility will become Kathleen Shingler Weston Hall, named for a 1929 alumna and the first female graduate to go on to complete a medical degree. The atrium in the New Science Facility will be named the David J. Lucas Atrium in honor of the longtime physics professor and department head.

-Re-elected Robert Mahaney chair and Steven Mitchell vice chair of the board for calendar year 2019.

-Approved the appointment of Rob Winn as dean of the College of Arts and Sciences, effective Jan. 1. He had been serving as interim dean.

-Accepted the WNMU-TV and WNMU-FM financial statements for fiscal year 2017-18.

-Granted Patricia Hogan the rank of professor emeritus of Health and Human Performance.

-Presented previously approved trustee emeritus status to Sook Wilkinson of Bloomfield Hills, who served on the board from 2009-16, including one year as chair.

-Recognized two outgoing trustees and NMU alumni whose terms end Dec. 31: Scott Holman (’65 BS) and Rick Popp (’88 BS; ’90 MPA). Holman was appointed to the board to fill a resignation-related vacancy for the remainder of the term. He had previously served eight years as a trustee, with one year as chair. He has a bachelor's degree in business from NMU and is a past recipient of the Distinguished Alumni award. Popp was appointed by Gov. Rick Snyder in January 2011 and served two terms as chair.of the board. He holds a master's degree in public administration, with an emphasis in personnel and labor relations, and a bachelor’s degree in computer science from NMU. He also was inducted into the NMU Sports Hall of Fame.