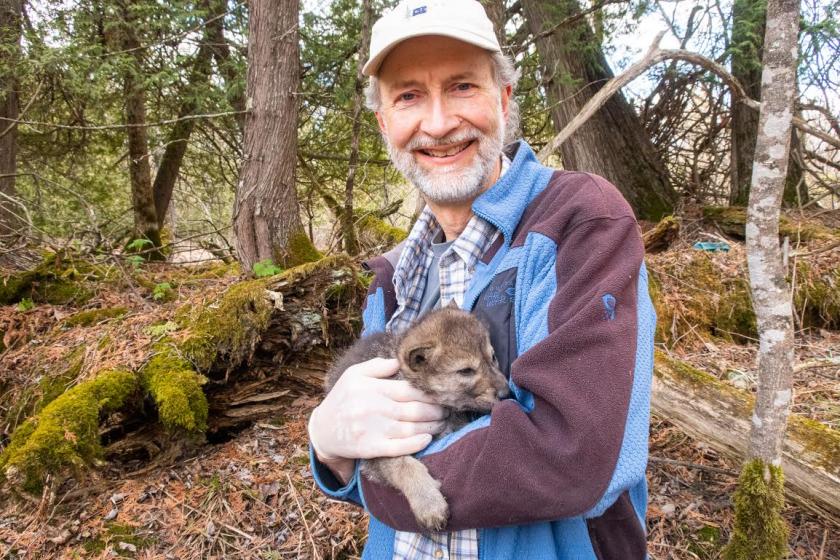 Bruggink with a wolf pup

Biology Professor John Bruggink has been selected as Northern Michigan University's 2021 Peter White Scholar. He will receive $17,500 to support his involvement in research on the homesite ecology of gray wolves in the Greater Voyageurs Ecosystem, and the participation of a master's student. The focus is on gaining a better understanding of habitat factors that influence where wolves choose to locate their homesites during pup-rearing season, and how those factors change as the pups develop and food availability varies.

This work is part of a collaboration with the Voyageurs Wolf Project, which grew out of Bruggink's work with two former NMU master's students: Tom Gable ('16), who now serves as project lead; and Austin Homkes ('21), who is a field biologist on the project. The alumni helped the project blossom through technological advances such as GPS collars that record the animals' location every 20 minutes and new techniques for on-the-ground searches. The University of Minnesota now manages the project with NMU as a continuing collaborator.

Bruggink said there are two categories of homesites wolves seek out at different stages: dens for newborn pups not yet weaned that provide shelter from the elements in a ground hole, rock cave or hollowed-out area under a tree; and rendezvous sites that typically lack a specific shelter for after weaning, when the pups are about eight weeks old and more mobile. While they move around more, the pups remain anchored to the rendezvous sites until they reach about 20 weeks of age and start traveling with adults.

“We're trying to understand what habitat factors influence where wolves put these sites,” Bruggink said. “It's important because it's a vulnerable time for pups and linked to their survival, which is in turn linked to population stability. As wolves expand their range into places they haven't been for quite a few decades, they are recolonizing areas that changed while they were absent in terms of human use and densities. Understanding the habitat factors important to them and whether those differ between dens and rendezvous sites could be useful for wolf management.”

In addition to shelter, other factors include an area's slope to avoid flooding, especially related to den sites that lodge more sedentary pups. These sites are also located away from the outer edge of a pack's territory, presumably to avoid potential infanticide from neighboring packs. Forest cover type and distance to water are other variables that might be important to homesite selection.

The Greater Voyageurs Ecosystem is located in northern Minnesota, near the Ontario border. The study area contains several wolf packs with widely separated homesites. Both NMU and the larger Voyageurs Wolf Project are collecting data for their own purposes and each others.

“Wolves are one of the few large carnivores recovering in areas from which they were previously extirpated [eradicated]. They are a very polarizing species, but interesting from a biological perspective because are a natural component of many ecosystems and, as apex predators, can have strong influences on the rest of the system. As they expand, there can be tension with humans in the areas they move into. Wolves are tolerant of human activity within their territories, but less so near their homesites.”

The Voyageurs Wolf Project has accumulated six years' worth of data, and will provide access to information on nearly 300 homesites when it's completed.

“By the end of this year we will data from nearly 300 homesites, which will allow us to complete possibly the most rigorous study of homesite selection by wolves in the heavily forested portions of their range,” he said. “We can use the data collected at those homesites to predict where homesites are likely to be across the entire ecosystem.

"We hope that land and wildlife managers can use that information to help minimize human disturbance to wolf homesites while still allowing people to use the land the way they want to as much as possible. Although we are focusing on the Greater Voyageurs ecosystem, we hope our work will  have broader applicability to southern boreal forest habitat.”

Bruggink planned to get out in the field a couple of times this summer, while collaboratively writing three manuscripts for publication and helping to develop a map of predicted homesite use across the Greater Voyageurs Ecosystem. One of the manuscripts will be a comprehensive review of the existing knowledge of homesite selection and use patterns across the geographic range of wolves.

The topic has been studied for decades, but the approaches and criteria used to identify and delineate homesites have varied and not always been clear, which can be confusing and hinder comparisons among studies. Bruggink said the paper will provide recommendations for future studies that he hopes will alleviate these problems.

NMU Master's degree candidate Lucas Beck, who previously volunteered for the project, will spend time in the field collecting data during summer and fall and also continue to work on making the homesite database more useful for the types of analyses required. He will be involved in all aspects of the data analysis, and some of this work will be the subject of his master's thesis.

One of Bruggink's areas of expertise is population ecology and he has a particular interest in predator-prey interactions. His background also includes migratory bird management. He did woodcock research for his master's degree under the late NMU professor Bill Robinson and studied Canada geese for his doctorate. Bruggink worked as a wildlife biologist with the Division of Migratory Bird Management of the U.S. Fish and Wildlife Service before returning to NMU in 1998.

His first exposure to wolf research was assisting a friend and fellow NMU graduate student as a field tech on a project in northern Minnesota. Bruggink later collaborated with the National Park Service (NPS) on beaver research at Voyageurs National Park in the mid- to late 2000s, which morphed into a project with former student Gable that looked at how wolves hunt beavers, and later transitioned to an emphasis on understanding the summer ecology of wolves.

Bruggink can be reached at jbruggin@nmu.edu.

Bruggink with a beaver during previous research
Prepared By