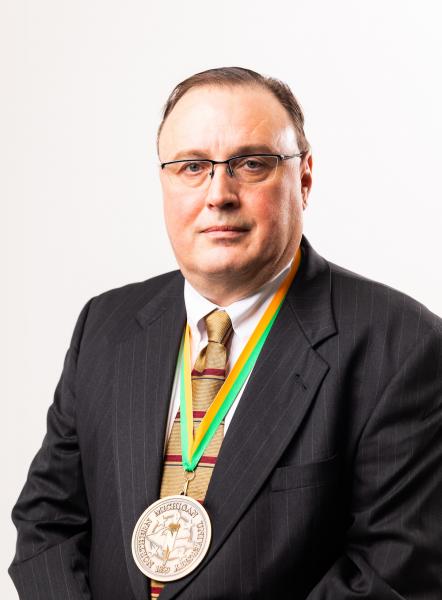 Northern Michigan University Marketing Professor Gary Brunswick has been awarded the Sam M. Cohodas Professorship. He has been a member of the NMU College of Business faculty for 30 years and was previously honored with the 2018 Excellence in Teaching Award and the 2005 Distinguished Faculty Award, among other accolades.

The NMU alumnus, who earned an associate degree in 1981 and a bachelor's in marketing in 1984, also was the 1994 NMU Outstanding Young Alumni Award recipient.

In his role as the ­Cohodas Professor of Business, Brunswick plans to accomplish the following and more:

“Gary is known for challenging his students and bringing out the very best in them,” said President Fritz Erickson in a virtual ceremony earlier this month.

“He stays in touch with many of his students many years after they graduate," added Provost Kerri Schuiling. "He is their teacher while they're here and their mentor afterward."

Brunswick said he likes to focus on research that is actionable. Examples include research on cause-driven marketing; credit card marketing targeting college students; out-shopping behavior (dollars that leave the Upper Peninsula); identity theory with the U.S. Army at Fort Knox; definitions of marketing spanning 100 years; and acceptance of autonomous vehicles.

He involves NMU students in all of his work, which is presented at conferences or published in national and international journals. These articles are still accessed hundreds of times around the world, he explained.

Brunswick is working with student Brandon Cooper ('21 BS) on the development of subscription-based services in the business-to-business market, such as for the electrical company where Cooper is employed.

NMU's first endowed professorship was established in 1974, when the late Sam M. Cohodas of Ishpeming, a well-known banker, financier and philanthropist, initiated the endowment and provided funds for a program of visiting professorships. He also funded a scholarship.

Since then, many gifts have been added to the endowment. The original recipient was College of Business Professor Harry Gunther, in 1990. Economics Professor Tawni Ferrarini was the second appointed in 2008.