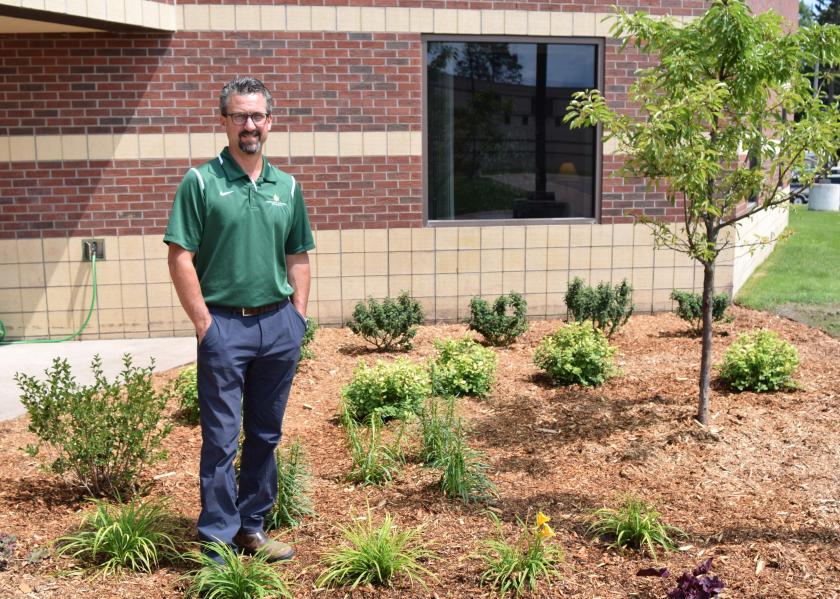 Smith on a snowless, summer day

Northern Michigan University Grounds Supervisor Andy Smith has had a passion for landscaping ever since he was a 9-year-old boy mowing lawns in hopes of raising enough money to buy a brand new bike. Now he leads NMU's efforts to transform its campus into the aesthetically pleasing space that it is.

“The Wildcat statue has an interesting origin,” said Smith. “We hand-selected the rock that the Wildcat sits on. We went to a local quarry and walked through huge piles of stone looking for the right size and shape that would pair well with the stance of the statue. We then had to get the 27,000-pound rock placed. Getting the crane on campus, lifting that rock into place and setting the rock correctly was a coordinated effort.

“A lot of people don't know that the Wildcat statue arrived here at 7:30 p.m. and the dedication was at 3 p.m. the next day. Our staff worked overnight in a pouring rainstorm to get the statue set and mounted into the rock. A local rock artist chiseled and ground on the rock until the feet of the Wildcat statue sat correctly. We were up until 4 a.m. It is fun to create things like this that will be here for years and you know future Wildcats will visit that spot.”

Smith said that his job entails the day-to-day operations of NMU's grounds department. His responsibilities include scheduling major projects, overseeing the student staff, ordering materials, budgeting and more. He supervises a staff of six full-time heavy equipment operators and landscape technicians as well as two mechanics on campus.

“We oversee the maintenance of all sorts of things on campus, from the Zamboni at the Berry Events Center to the floor scrubbers the janitors use, to the plow trucks that are used to clear the streets.”

Smith said that the most rewarding aspect of his work has been transforming parts of campus by creating spaces where people can sit and enjoy. He said that he likes encouraging people to spend more time outdoors in those spaces.

“Here on campus, the totality of the change has been fun. Most recently, I have enjoyed being a part of the Northern Center renovation and working on the outdoor aesthetic there.”

Smith holds a bachelor's degree in building architecture from the University of Wisconsin-Milwaukee. Since he did landscaping work throughout high school and college, he said that he pursued both architecture and landscaping jobs upon graduating.

“I have always enjoyed creating, building and designing things, so pursuing architecture seemed to make sense. I love working with my hands and being outdoors, too. The payoff in landscaping is quicker than in architecture. I can start with a blank slate in the morning and have a beautiful garden space at the end of the day. I enjoy that.”

Prior to his NMU position, Smith worked for landscaping contractors in Milwaukee and Appleton, Wis. During this time, he was involved in installation, maintenance, running crews, designing and selling. He also took horticulture classes at a technical college.

While in Appleton, Smith started his own business, Independent Landscape Solutions, and his wife, Erica, opened The Gathered Earth, a retail gift store. After a trip back to Marquette in 2016, the couple decided to relocate both businesses to Marquette. Their goal of “moving home” and being closer to family came to fruition one year later.

“The job at NMU was not on the horizon at the time when we decided to move. Then, when I was sitting on the last moving box in Appleton, a close friend of mine in Marquette called and told me about the position opening at NMU. I threw my hat in the ring and wound up starting at NMU in October 2017.

“It was the cherry on top. The whole move back here was a leap of faith. It was very serendipitous how things just fell into place. NMU is a great place with great people. I am so glad we moved back here.”

Smith resides approximately one mile away from campus. He said that his favorite aspect of living and working in Marquette is not only the natural environment but also the culture in the Upper Peninsula.

“There is a culture here that you do not find elsewhere. Many people ask, ‘Are you a good person, do you treat the environment right and do you enjoy living here?' These are the things I find that people value more than anything here. I appreciate the groupthink here.”

Outside of work, Smith enjoys mountain biking. He said that he feels spoiled by the trails located outside his back door. He also enjoys downhill skiing, fat-tire biking, camping and “being outside in general.”

Smith is also fond of spending time with his family. His two children, Harrison and Lilly, are both NMU students.

As he looks to the future, Smith would love to travel and explore “all the great parts of our country.”

“The van life is something I can get behind. The idea of packing up and hitting the road for a few months is really appealing to me.”

For now, Smith is staying put in Marquette, where he continues to positively impact the aesthetic appeal of Northern's campus for students, employees and visitors to enjoy.