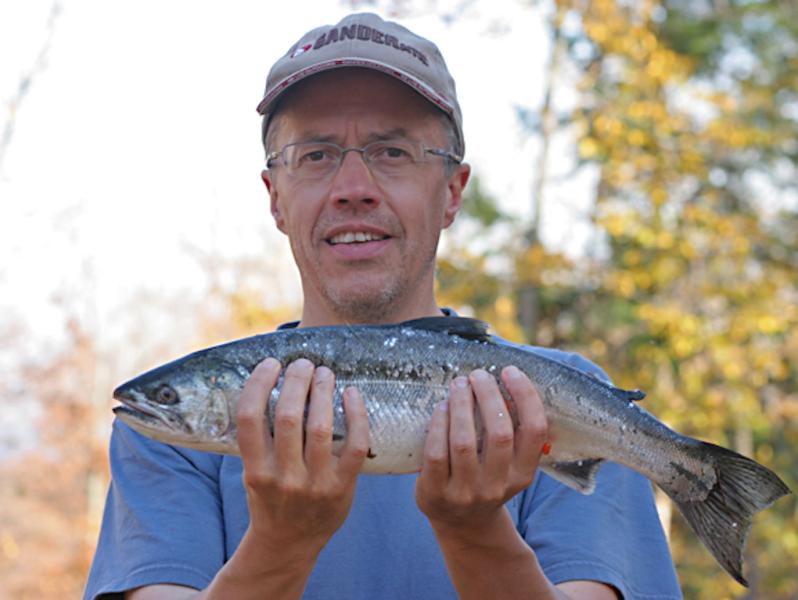 Phillips with a Coho salmon

J.D. Phillips is drawn to “the intellectual beauty and depth of pure mathematics.” He describes mathematics as closer, in some ways, to poetry, painting and musical composition than to the laboratory sciences.

“Mathematics is like haiku,” said Phillips, professor and head of the Mathematics and Computer Science Department. “There's a rigid structure, but within that tight framework there is complete freedom. Mathematics is, contra the stereotype, not numerical or algorithmic, in fact, quite the opposite. Mathematics requires creativity; numerical skills are irrelevant.”

Phillips enjoys this freedom anywhere. He says “You don't need a lab; you don't need equipment; there is no field work. You can do serious mathematical research while hiking, while driving cross country, while sitting in boring committee meetings.”

While growing up on a cattle farm in a small Nebraska town of 700 residents, the idea of becoming a college professor was not on Phillips' radar.

There are many students who have an appetite for mathematics, but they don't realize it unless they stick with mathematics until it gets interesting in the last couple of years in college. “When I was in college, I studied to become an engineer, mostly because I was ‘supposed to'. Toward the end of that program, I found, much to my surprise, that I was obsessed with my upper-level mathematics classes. I realized then that mathematic was a possibility for me; I was drawn to it.”

Phillips said that one of the most rewarding aspects of his career aligns with the mission of a regional university.

“The opportunity that NMU provides its students is profound, often life changing. It's fulfilling to me when students begin to see the whole landscape of mathematics opening up to them. For many of our students—for kids who grew up without a lot of fancy opportunities (the miner's daughter from Negaunee; the cattle farmer's son from Wausa, Nebraska)—their four transformative years here will be one of the greatest opportunities of their entire lives. It's immensely rewarding to be a part of this.”

Phillips said that conducting research in mathematics is the other great reward of a mathematical life. He is usually working on four or five research projects at a time. “In mathematical research you get stuck all the time. So when I hit a wall, I like to bounce back and forth between problems. Some problems can be solved quickly; others, not so much. There are even a few problems that I have been working on for 35 years (and counting!). Two problems in particular stand out that I'd really like to solve someday: one is about groups with triality, and the other explores the algebraic structure of commutativity in Moufang loops.

“To be the first person to discover a mathematical truth is intoxicating. Mathematics is different from most disciplines. In many disciplines they say that each generation tears down what the previous generation erected. We don't do that in mathematics. When you push the program and field forward, it's an incredible feeling; your theorems will last forever.”

Phillips' main research interest is in solving hard, open problems in algebra, especially using automated reasoning. And he's thrilled that one of his current projects is with departmental colleagues and graduate students (a research program involving Lie algebras and groups).

Upon finishing his doctorate, Phillips began his career in the San Francisco Bay area, spending nine years as a professor at Saint Mary's College of California. He then came “back home” to the Midwest, accepting a position at Wabash College in Indiana, where he stayed for eight years, before to coming to NMU in 2009.

“I've always loved the north woods, and I'm a big fan of the idea of the regional university. Many of our students here at Northern come from backgrounds similar to mine; I understand them. When the job at NMU became available, I jumped at the opportunity.”

A “sum” of fun facts about Phillips: He played lead guitar in a touring rock band for a couple years, holds a second-degree black belt in Tae Kwondo, and is a passionate birder. He keeps lists of how many bird species he has seen (his U.S. total stands at 745, and counting). One of his cousins is Adam Vinatieri, the NFL's all-time leading scorer.

Away from the office, Phillips spends a lot of time in the woods, whether he's biking, running, kayaking or fishing with one (or all) of his three sons, all of whom are NMU students. His wife, Cathy, a teacher at Cherry Creek Elementary School, more than holds her own in a household with four men.

From his unique hobbies to his creative perspective on mathematics, Phillips is a well-rounded, interesting and passionate individual whose keenness for his field is “incalculably” contagious. 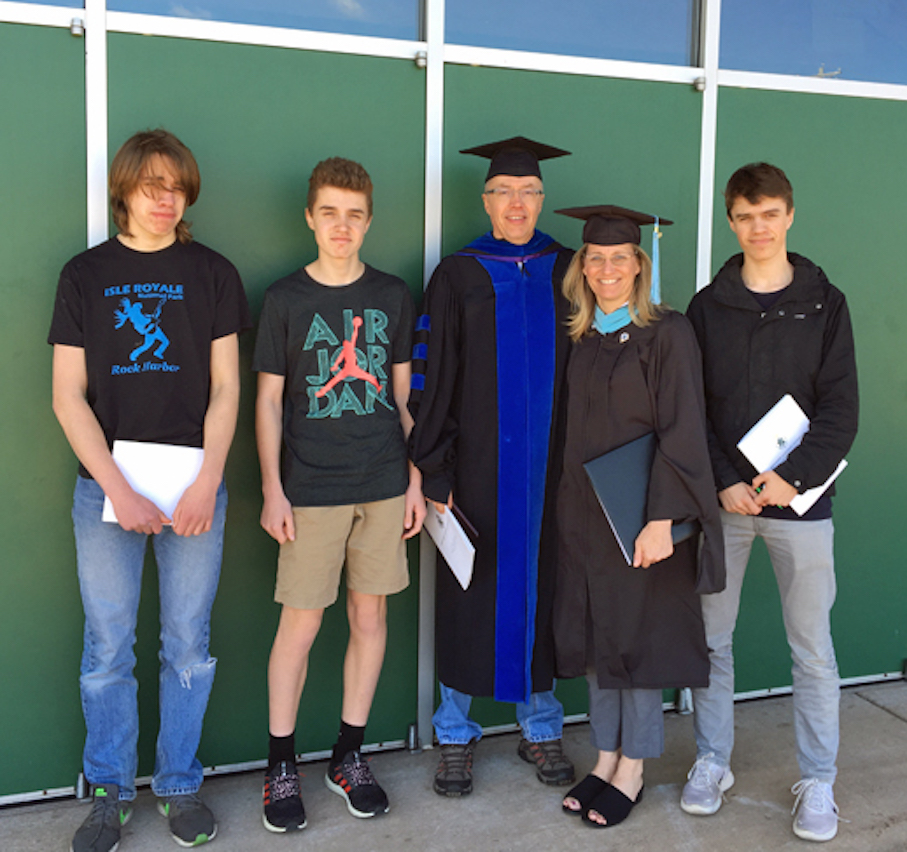 The Phillips family at Cathy's first master's degree graduation at NMU, 2019
Prepared By