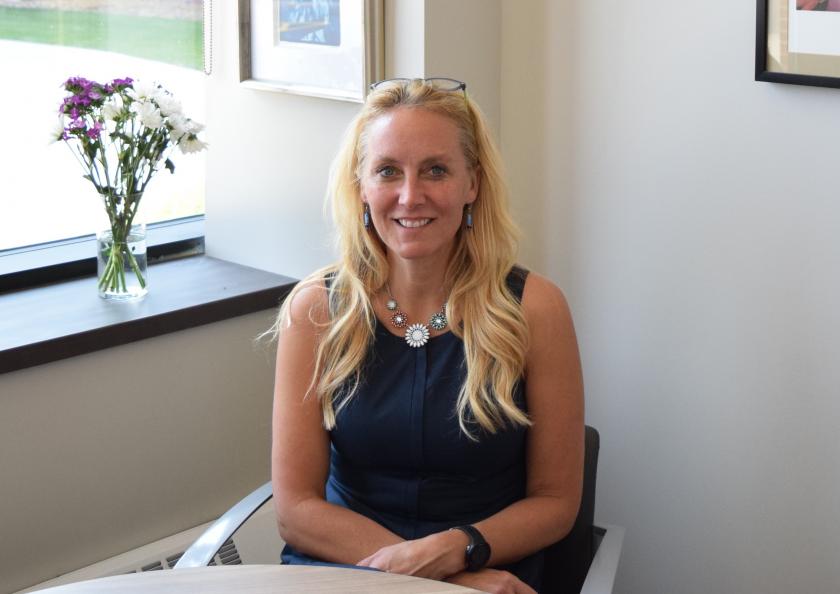 What began as a work study position 28 years ago has developed into a lifelong career for Rachel Harris, director of the Center for Student Enrichment at Northern Michigan University.

“I feel like I was destined to work in student affairs,” said Harris. “I didn't even know what it was until I began my work study program. I absolutely fell in love with working in the student affairs and the student activities office from the moment I began there during my undergraduate study. I like the high energy level of it all. There's a sense of chaos, yet it is so rewarding and fun.”

An enthusiastic individual with a contagious personality, Harris said that the mission of the Center for Student Enrichment is to increase students' involvement, engagement and feelings of connection to the university. “We want everyone to join some sort of student group or activity so that they can get connected and make friends,” she said.

“A lot of the things that we do shift and change cyclically from season to season. And students' interests and requests change a lot, too, from year to year and over time. That is fun. I like change. The fact that our department gets to drive a lot of change here on campus is fun and exciting.”

Harris said that building relationships with students is the most rewarding aspect of her job.

“I love being able to support them and watch them thrive. NMU has so many motivated students who in turn motivate me. I have actually always loved working with college students, ever since I was one myself. Through my job, I am surrounded by such a positive, focused population. To see people grow and develop and become incredibly confident and successful is personally so rewarding. Our students do great things.”

A project Harris is excited about having rolled out this year is the Pick One initiative. Pick One provides NMU students with points for the activities they do on campus. Students' points enable them to win prizes such as swag and gift cards.

“I really want Pick One to be an exciting part of the campus culture. I'd love to be on campus and overhear, ‘Hey pal, what's your one?' There is a sense of value in getting involved in whatever that number one campus activity or event may be for you.”

Harris resides a mere five blocks away from campus with her husband and college sweetheart John, whom she met in an English course at NMU. The couple finds a sense of reward in doing home renovation projects together, whether it be painting, tiling or something else. They also share a passion for travel and traveled to Portugal to celebrate their 30th wedding anniversary this past October.

Outside of work, Harris enjoys thrifting and rummage sales, as well as spending time outdoors, especially during the summer. You may spot her running on one of the U.P.'s many trails or perhaps walking her dog along the lakeshore bike path in Marquette. She also enjoys spending time with her son Ben and daughter-in-law Maddie.

As a component of her work, Harris leads Superior Edge service trips. She has brought students to such destinations as Thailand, India, Belize, Brazil, New Zealand and more. Her bucket list goal is to travel more when she retires down the road.

“It is so fun to introduce students to travel and to see that lightbulb come on in their head while they think, ‘I can do this.' Travel leads to life-changing experiences. Students who go on Superior Edge trips often note afterwards that it was one of the best experiences of their college career.”

With tears in her eyes and a smile on her face, Harris said that her role model is her mother Esther Deno.

“She is incredibly ethical and so full of integrity. My mother is completely honest to a fault and so giving that she would give someone the shirt off of her back. I wish I could be half of the woman that she is.

“After raising my brother and I as a single mother, she attended NMU for her BSN [Bachelor of Science in Nursing] degree at the age of 50. She did not pursue it for monetary reasons, as she had an associates degree in nursing already. Rather, it was something she said that she started and wanted to finish. That was really inspiring to me.”

Much like her mother's sense of integrity and ethic has inspired her, Harris' passion for her work and devotion to genuine student success is truly awe-inspiring for anyone who crosses paths with her.