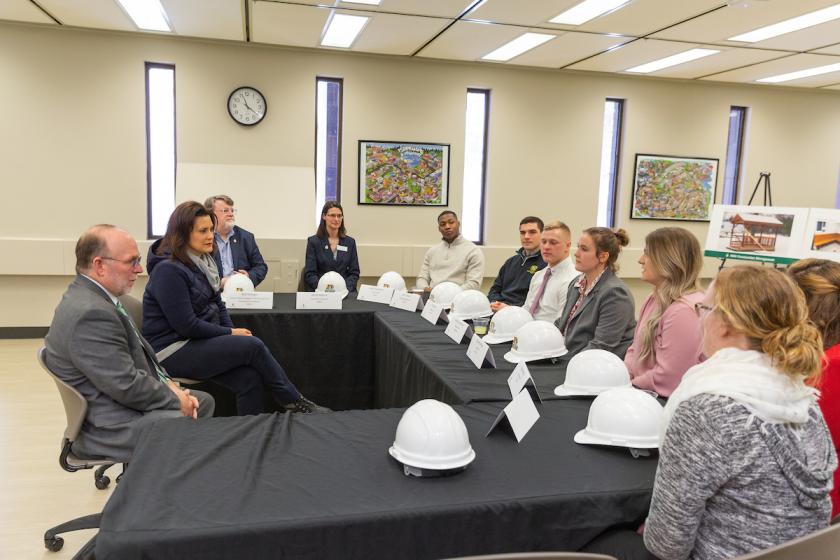 Governor with students and administrators

Some of NMU's construction management students had a rare opportunity to meet privately with Gov. Gretchen Whitmer during her visit to campus earlier this month. They gave her an overview of the program, explained why they chose that path and shared their career plans after graduation.

“It was definitely a cool experience and a great opportunity that someone of that position would spend the time to talk with us,” said senior Elizabeth Bose of Lupton, Mich. “The governor was really interested in knowing the opportunities we have through the program and the university. She's an advocate for skilled trades and construction workers and seemed very happy with our placement rate, which is close to 100 percent. I had three offers on the table and will become a traveling field engineer with the solar group of Mortenson Construction after I graduate in May. I can't say enough about the program and professors; they're amazing. We also have small class sizes and very hands-on labs.”

Professor Heidi Blanck also attended the session. She spoke about women in construction and how efforts such as related career exploration days at NMU introduce girls to the typically male-dominated field and give them a viable career opportunity to consider. Blanck said efforts to recruit more women will help to stem the flow of attrition in the industry and benefit the construction economy as a whole.

“The governor, during her campaign, focused on jobs and she knows construction is a growing field in Michigan with a lot of unfilled positions,” Blanck said. “We talked about how we can help in trades and in the administrative management side of things. The students did a fantastic job representing the program. All were from Michigan. They shared their experiences and Gov. Whitmer had great questions for them.”

Kurt Thiele, a senior from Sterling Heights, will be moving to Dallas after graduation. He will work for Hill and Wilkinson with chief operating officer and NMU alumnus Mike Oswald. Thiele gained experience working for Walbridge on the NMU residence Hall project.

“It was definitely special to meet with the governor, and I think it went well,” Thiele said. “She's serious about replenishing shortages of people to work trade jobs through retraining programs and also getting youth to go in that direction. That's a big deal throughout the U.P. with all the construction going on. There's a big demand for construction workers and skilled trades.” 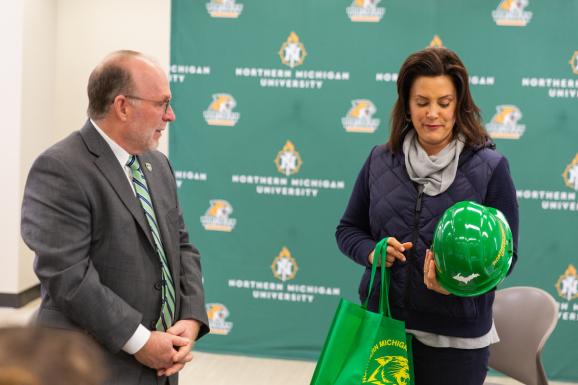