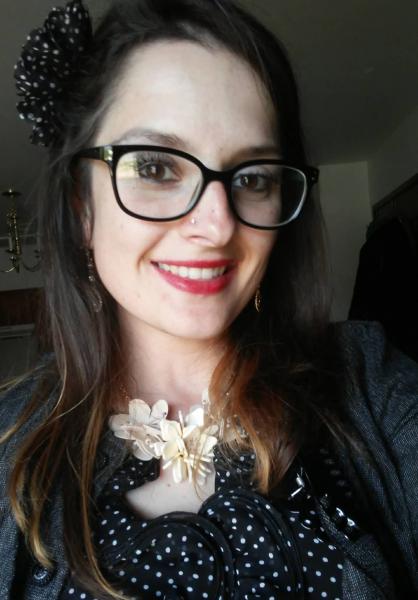 Criminal Justice is one of several departments that have come up with ways to recognize their May graduates in a virtual format, after commencement was postponed by COVID-19. Staff members assembled a PowerPoint slideshow featuring seniors' photos and future plans. It includes Cynthia Benson, the department's outstanding graduate and McNair Scholar, who balances academics with her role as a single parent.

Benson is a Powers native who earned her GED when she was 16 and started working at a nursing home soon afterward. She continued in a CNA capacity for about eight years until burnout and an injury convinced her she would not be able to do that kind of work long term. The realization motivated Benson to pursue her longtime goal of obtaining a college degree.

“Criminal justice always interested me,” Benson said. “I grew up watching a lot of crime and mystery shows and reading those kinds of novels. Going back to school was really a challenge as a single parent. I had to juggle my class schedule with my daughters' school and activities—they're 9 and 11. I also had to juggle the financial aspects. Fortunately, I had some help. The fact I'm actually done is indescribable, and I'm really honored to be selected as the department's outstanding graduating senior.”

When she decided that her minor would be in social work, Benson began volunteering with the Women's Center as a victim's advocate. Her experiences working with survivors of intimate partner violence and sexual assault have given her a better understanding of crime and its impact.

Based on her knowledge of people who have gone through the criminal justice system, Benson is particularly interested in issues related to prisoner reentry and diversion programs. She plans to explore those further when she attends Wayne State University to pursue a master of social work (MSW) degree. Her goal is to establish a meaningful career in the policy arena.

“With reentry, there's not presently a lot of access to treatment programming,” she said. “A lot of studies have shown that, without community treatment programs for substance abuse and mental health issues, recidivism rates are high. I would like to work on offender reentry and focus more on the rehabilitative side of things. I feel strongly about that, and it makes sense with how my views align with social work.”

As a McNair Scholar at NMU, Benson worked alongside former faculty member Leah Shon to conduct research regarding sex offenders within the Boy Scouts of America. They pored over resignation letters from offenders, searching for patterns in their responses to allegations of sexual abuse toward scouts. Benson presented the findings at the Midwest Criminal Justice Association conference in Chicago.

“McNair was one of the coolest things I've been a part of at Northern,” Benson said. “There are just so many opportunities available to students here. Many of them literally land in your email. It's amazing. I was involved in the CJA [Criminal Justice Association] student group and worked with Student Support Services as a tutor. Off campus, I volunteered as an assistant troop leader for Girl Scouts. Both of my daughters are involved in that.”

Benson and other criminal justice graduates are featured in the slideshow compiled by departmental secretary Nikki Loehr and her team after someone saw the idea on the NMU social media administrators' Facebook page and suggested that criminal justice implement it.

“We feel our students have worked so hard to achieve their degrees, that they should get some recognition for it,” Loehr said. “We truly appreciate our students. After all, they are the reason we are all here.”

Other NMU departments are implementing similar virtual projects to honor their graduates.