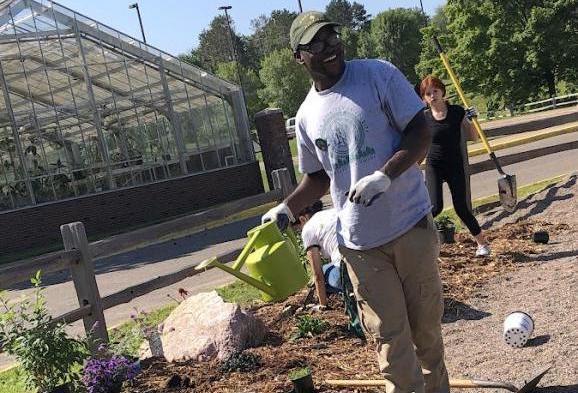 During an Aim North summer visit to campus, participant (and now NMU freshman) Tirzah Roberts helped to plant a garden.

Graduating high school seniors in Detroit were able to get a head start on college before leaving their hometown through Aim North, a pilot program offered through Northern Michigan University’s Diversity and Inclusion Office. Students could take two summer courses, earning up to eight credits toward the liberal studies requirements for a degree prior to enrolling at NMU or another institution this fall.

Classes are taught by NMU faculty or qualified Detroit-area instructors. This past summer’s courses included college composition and Anishinaabe language, culture and community. They were held at Cesar Chavez Academy in Southwest Detroit.

Tirzah Roberts, a freshman general studies major with a focus in psychology, completed the program and is one of six students who successfully transitioned to NMU. He graduated from Cass Technical High School in downtown Detroit.

“We had a college fair [at my school] and, right from the beginning, I felt a connection to Northern,” Roberts said. “For the Native American Studies class, at one point we came up here and stayed for three days. We made dreamcatchers and baskets out of bark. It was just amazing because we hiked up a mountain. That was my first time hiking, and then we got to see the whole horizon.”

Roberts said he feels like there is a good support system in place since coming to NMU and he plans to remain for the rest of his four-year degree.

Chief Diversity and Inclusion Officer Jessica Cruz created and spearheaded the Aim North program, which aligns with NMU’s core value of inclusion in the strategic plan. She said its main purpose is to connect students to one another before they come to campus to create a strong sense of community and belonging while at NMU.

“The goal now is to keep them connected. If we establish a relationship with the community before they get to campus, then it makes it easier to also support them while they’re here,” Cruz said. “Parental and family engagement is another goal of the program. That way, while students  work toward their degrees at NMU, families can connect with one another to support the students through graduation and beyond.”

Students must go through a series of steps in order to qualify for the Aim North program. First, they must submit an interest form to their school officials and then apply to NMU. Next, they have to fill out the Free Application for Student Aid (FAFSA) by the designated deadline.

Following the application process, selected students will be bussed to NMU for a summer orientation session before they will return to Cesar Chavez Academy to attend classes for eight weeks. Should a student choose to attend NMU after completing the program, they would return to campus for the fall semester and become official members of Aim North Scholars, which is made up of fellow program participants.

The cost of tuition for Aim North is $3,016. There is also an application fee of $25. During the 2018 summer pilot program, the Office of Diversity and Inclusion paid for textbooks and all remaining expenses for students who successfully completed the courses with a C or above, including orientation expenses for students attending NMU in the fall. Students can use financial aid dollars to pay for the courses if they qualify. Aim North participants are not required to attend NMU after the program.