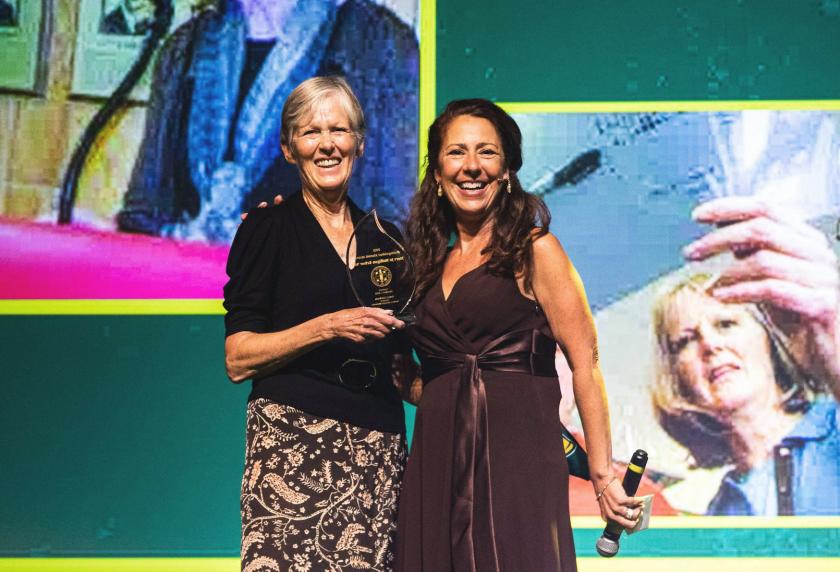 Northern Michigan University's 2021 Distinguished Alumni Award recipient, Mary Jo Mulligan-Kehoe, demonstrated both patience and adaptability on her journey to a highly successful career in biomedical research at the National Institutes of Health (NIH) and in vascular biology at Dartmouth Medical School. She retired with four patents to her name, but remains active in service to her profession, and in creating visually engaging online science presentations for students in grades 6-12.

The Marquette native graduated from NMU in 1968 with a bachelor's degree in biology and a minor in chemistry.

“There were a number of professors at Northern who influenced me, especially in organic chemistry—one of the most difficult courses a biology major takes—and ecology,” she said. “I also loved the size of Northern. I could walk across campus and repeatedly see people I knew from my classes, which doesn't happen with a larger population. I also got very involved with student activities. I was president of the sorority and then president of the Panhellenic Council.”

Mulligan-Kehoe willingly paused her education to raise three children while accompanying her husband, an Air Force officer, on multiple moves to new locations.

“I developed a ‘You have to go to grow' philosophy and made the most of each move by becoming involved in volunteer service or other activities to learn more. I waited until my youngest was in school all day to enroll in graduate school.”

Mulligan-Kehoe completed her master's degree in biology from George Mason University while her husband was stationed in Virginia. She earned a doctorate in biochemistry from the Christian de Duve Institute—named for the late Nobel Prize laureate—at Catholic University of Louvain while they were in Brussels, Belgium.

Twenty-two years after receiving her NMU diploma, at age 43, Mulligan-Kehoe completed graduate school and began her postdoctoral training at the NIH. The delay seemed to fuel her passion and infectious enthusiasm for the discipline. She also inspired younger colleagues with her high-octane energy.

Her NIH molecular biology research focused on genetically engineering an antibody heavy-chain fragment (Fd) to promote intracellular immunity related to HIV, a major concern at that time, but with implications that might translate to other viruses, such as COVID-19.

“Our body makes antibodies that have heavy and light chains,” she explained. “Up to that time, everyone assumed you needed both chains for the antibody protein to fold properly so it could capture antigens. Instead, we just used a fragment of the heavy chain and randomized the sequence. This enabled us to generate a library of heavy-chain fragments, which potentially could bind to any antigen. We were the first to show that was possible. That became the foundation for everything I did moving forward.”

Mulligan-Kehoe left the NIH to begin an academic career in vascular biology at Dartmouth, and received NIH grants to support her work. Her lab discovered that a specific plasminogen activator inhibitor (PAI-1) protein isoform controlled angiogenesis, blood vessel formation from pre-existing vessels that occurs in cancer and atherosclerosis. She published her work in several highly respected journals.

While teaching, Mulligan-Kehoe realized that it is much easier for students to grasp complex topics when they are illustrated visually. So she would gather students in a conference room and draw pictures on a white board. That practice motivated her post-retirement mission to develop animated and narrated PowerPoint presentations for middle school and high school students.

“I have grandchildren who took biology and their textbooks were terrible; all words and they were words the kids had never seen before. Upcoming generations are visually oriented and incorporating that is a key to instilling in them a love of science.”

Mulligan-Kehoe did some in-person presentations at schools before her grandchildren convinced her to post them on YouTube instead. She plans to accompany each lesson with a link to a website still under development that will provide youth with tools and information to design and conduct their own experiments.

Family remains a top priority for Mulligan-Kehoe, just as it was when she decided—without reservation or regret—to postpone fully immersing herself in graduate studies until her children were firmly entrenched in school.

“I am proud that I was motivated and determined to continue my education despite my age; I think it sets an example for other women who choose to stay home with their growing children,” she once said in a Dartmouth Medicine profile. She praises her now-expanded family for being “amazingly supportive.”

Mulligan-Kehoe continues to contribute to her field as a scientific review officer for the Department of Defense Congressionally Directed Medical Research Program. She also chairs the North American Vascular Biology Organization education committee.

In her free time, she enjoys photographing faces and flowers. The hobby is an extension of her interest in imaging, which was piqued by advances in microscopy that occurred while she was at Dartmouth. Another favorite pastime is regular four-mile barefoot walks through wet sand that rims the ocean near her home in Huntington Beach, Calif.