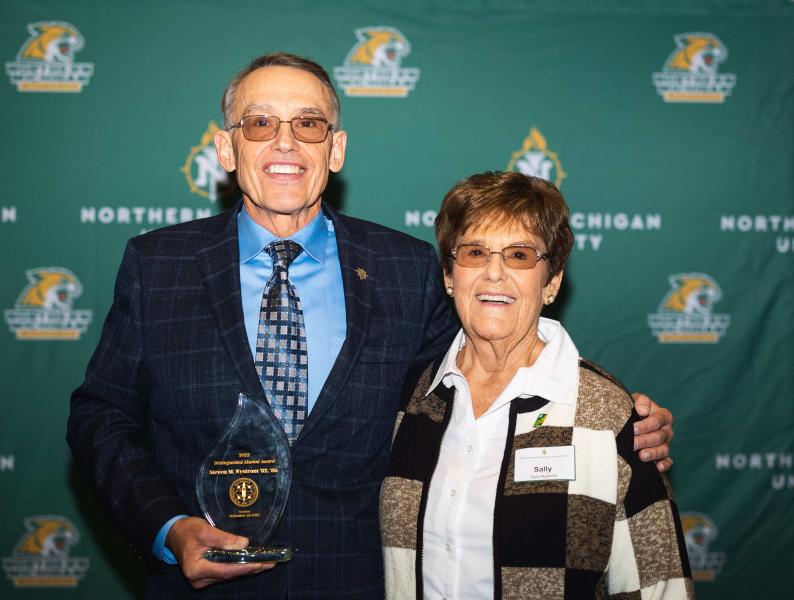 Steve Nystrom and his mother, Sally

For 31 years, Marquette native Steve Nystrom successfully used the knowledge, skills and leadership qualities he acquired while earning two Northern Michigan University degrees to successfully contribute to U.S. national security. He served in the U.S. Army during the Cold War, as a senior analyst in the Defense Intelligence Agency, and as division chief and program manager with the National Geospatial-Intelligence Agency.

Nystrom was selected as the 2022 Distinguished Alumni Award recipient based on his esteemed career and active involvement on behalf of the community and NMU.

Nystrom earned his bachelor's degree in business administration in 1982. Four years later, he completed a master's in defense administration and was commissioned as a second lieutenant in the Armor Branch of the U.S. Army.

“I always had a desire to serve my country with the military, and Northern professors influenced my specific interests in international affairs and the intelligence community,” he said. “Dr. Fred Berry's courses provided an overview of the U.S. intelligence community, how insurgencies and revolutions start, and what governments can do to prevent them by meeting the basic needs of their people. Dr. Robert Kulisheck addressed national security matters such as nuclear policy and diplomacy, and Dr. Miodrag “Bata” Georgevich taught international relations/law.

“My overall experience was excellent because of relatively small class sizes that allowed professors one-on-one time with their students to determine what was going well or needed to be improved upon, and many extracurricular organizations that taught me a variety of things and gave me different perspectives to build upon. I even met my wife, Joan (Sytek), at a business fraternity social. The quality of my education was every bit as good as that of the people I met who the service academies and various high-ranking prestigious schools. It was also more affordable and more personalized.”

During the Cold War, Nystrom was on the front lines as an armor officer—platoon leader—in West Germany, with four tanks and 16 soldiers under his command. He became a senior analyst in the Defense Intelligence Agency (DIA) after the first Gulf War, which introduced the public to the capabilities of unmanned aerial vehicles (UAVs) and reconnaissance satellites. Nystrom worked varied assignments providing geospatial intelligence and products to the Drug Enforcement Administration, identifying and targeting narcotics labs and the suspected locations of key leaders in the Cali Cartel, who were eventually captured.

After a promotion and reassignment to the DIA's Operations Intelligence Coordination Center, he handled geospatial intelligence requirements that informed decisions by U.S. policymakers and helped U.S. and allied military forces plan and execute operations.

Nystrom said there were a lot of crises in the wake of the Cold War; it wasn't as peaceful as many people assumed. For the crisis in Bosnia, he briefed officials on capabilities and limitations involving geospatial or imagery intelligence. When the Soviet Union collapsed, he helped to determine the location and status of Russia's tactical and strategic nuclear weapons.

“It's one thing to break into a missile silo or hijack a sub to teach the world a lesson. But both military and civilian leaders were highly concerned about the small, suitcase-sized weapons or “pocket rockets” deployed throughout the Soviet Union in bunkers and elsewhere because they didn't want al-Qaeda or rogue nation states to acquire them.”

Imagery factored heavily into his later role as division chief and program manager with the National Geospatial-Intelligence Agency (NGA). During two deployments to Iraq, he was responsible for providing images and products from reconnaissance satellites and UAVs to support U.S. military operations and State Department capacity-building programs.

Much of this was during the Sunni Awakening, in which Sunni insurgents who had formerly fought against U.S. troops eventually realigned themselves with U.S. and coalition forces to repair critical infrastructure such as power plants, schools and hospitals. This greatly

reduced the appeal of insurgent groups, particularly those affiliated with al-Qaeda, and sectarian violence.

“It was one of my greatest achievements because our efforts helped to end the insurgency by stabilizing the situation in Iraq, which led to elections that enabled them to form a government encompassing the Shiites, Sunnis and Kurds. This of reduced both the military and civilian casualties and allowed us to bring our brave men and women home.”

Nystrom successfully completed the U.S. Army School of Advanced Military Studies (SAMS) program. He wanted to ensure that NGA analysts remained embedded with U.S. military forces to ensure they had access to geospatial intelligence for successful planning and execution of military operations to keep service members safe. Nystrom had an epiphany that he should complete the highly rigorous program himself, so he volunteered to go. Three years before his 2017 retirement, he became the first civilian from NGA to graduate from SAMS, paving the way for other intelligence community analysts to follow.

With more time to devote to community service, Nystrom serves on the board of directors of the YMCA of Marquette County, as a member of Marquette West Rotary, and is a “Big” to six local children. He and his wife, Joan, have adopted a family and helped them acquire a home. He also gives back to his alma mater by providing guidance on the U.P. Cybersecurity Institute on campus, and giving presentations to local high schooNMU students regarding Russia's invasion of Ukraine.

“Receiving the prestigious Distinguished Alumni Award from Northern is, of all things, the highlight of my career. The university set me up very well to succeed in life and I want to see it do well in the future because it's an integral part of the community.”

Nystrom and the other 2022 alumni award recipients were honored during Homecoming weekend Sept. 23-24.