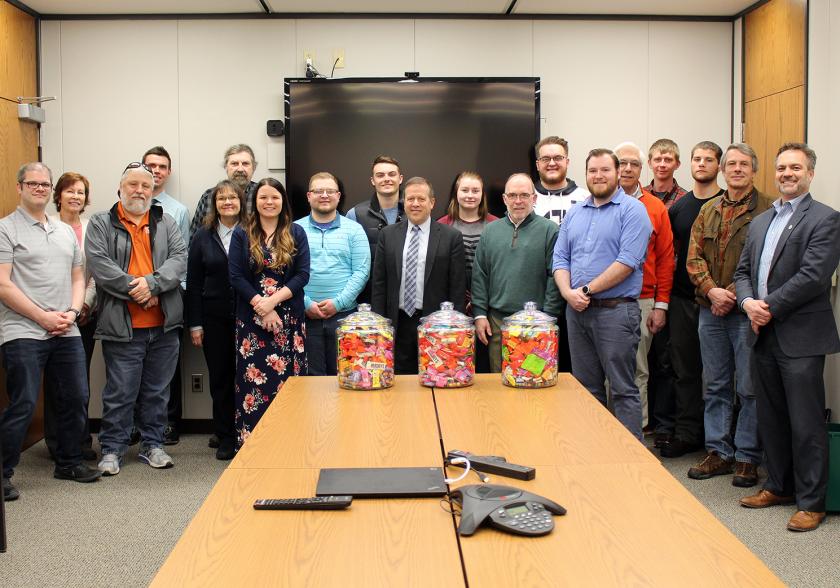 More than 3,500 Upper Peninsula residents have subscribed to Northern Michigan University's Educational Access Network. NMU administrators marked the milestone recently by honoring staff members involved in the effort and distributing 3,500 pieces of candy to match the number of subscriptions. The EAN provides broadband internet service through the university's high-speed LTE wireless broadband network to learners of all ages in a growing number of Upper Peninsula locations.

“It's going exceptionally well and the momentum is building,” said Steve VandenAvond, vice president for Extended Learning and Community Engagement. “We've reached that critical point where people understand what it is and we have a growing number of educational offerings. We're up to about 200 new subscribers per month, whereas before there were a few per week. A small number of NMU staff members have managed to build something that is bringing educational broadband to rural households that either lack broadband entirely or the minimal speeds required for educational use. They've worked hard to raise the bar and deserve to be recognized for what they've achieved so far.”

Through partnerships with municipalities, NMU has placed the required LTE transmitters on existing water towers and other tall structures, or built new towers to support the equipment. The university received a $6.5 million investment loan fund award from the Michigan Strategic Fund to accelerate the effort. NMU has extended the network to more than 50 cities and townships, with more under development. The goal is to provide coverage to the entire Upper Peninsula. NMU also works with the region's K-12 school districts and colleges to deliver broadband to students and their families.

“There are great ideas that never go anywhere, but if you have the right people in place to see it through, special things can happen,” said Gavin Leach, vice president for Finance and Administration. “The EAN is one of a kind and requires a talented team of individuals involved in the planning, design, implementation, maintenance, sales and service aspects. We hear high praise for the EAN when we're meeting with legislators Lansing and Washington, D.C.”

NMU President Fritz Erickson said, “I've been around higher education most of my life, and for years, people have talked about the problems brought on by the digital divide. The internet is an important economic driver; so is education. We're combining both by making educational broadband easy, accessible and affordable. We first had that ability with our former WiMAX system, but we thought maybe we should offer access to more folks. We developed our LTE and obtained a license from the FCC [Federal Communications Commission] to provide access across almost all of the Upper Peninsula.”

“The focus is on providing Internet to unserved and under-served areas,” he added. “Today's access to information is crucial to any age group to facilitate learning, development, socialization and economic development. With the goal of providing continuing education and access to current information, NMU also makes the EAN available to community members. NMU alumni and military veterans are eligible for a discounted rate. Other community members using the EAN agree to complete at least one non-graded, self-paced learning activity annually from a growing array of personal and professional development modules.”

Access to the network requires a one-time purchase of an NMU LTE mobile hot spot, an indoor stationary receiver or a mountable indoor/outdoor receiver. To sign up for EAN, visit www.nmu.edu/ean from a smart phone or computer. Those without broadband can register using a public computer at a library or school. The interactive website provides tools that individuals can use to determine if service is available at their homes.