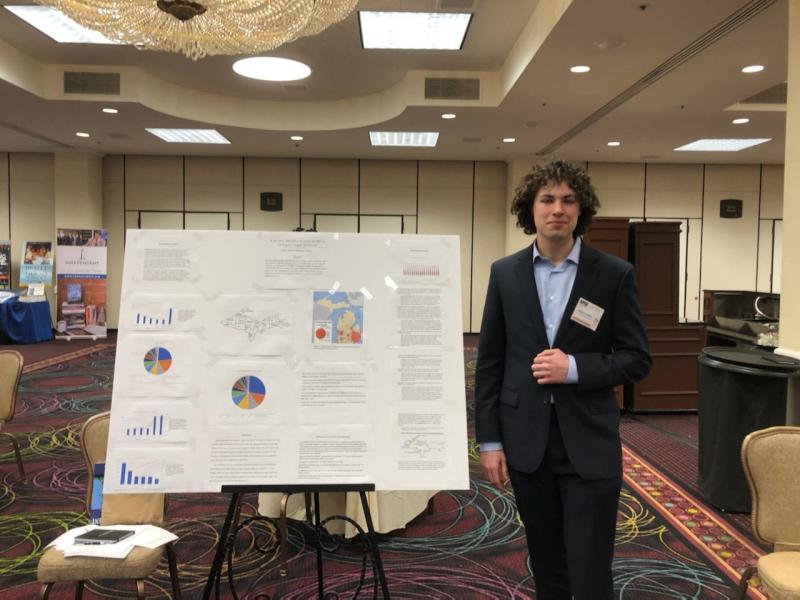 “The conference was very academic,” Steele said. “It was divided into two parts, plenaries or long talks that took place three times a day and break-out sessions that happened in between the plenary sessions. It was a very informative experience for me, I learned a lot about economics and the role of government in public markets.”

Steele, a senior studying economics, presented his research A Ten-Year Recovery Analysis of GDP in Michigan's Upper Peninsula, which examines the Upper Peninsula and its economic recovery after the great recession.

“I started working on this project for Rural Insights and published it in May of last year. The analysis was focused on gross domestic product (GDP) recovery by county and industry in the Upper Peninsula. I would say that the big takeaway is that the U.P., for the most part, did recover, albeit a little slower than the rest of Michigan and the United States as a whole.

“Also, counties with larger populations and ones with a better initial disposition did have a quicker recovery and had a less substantial downturn.”

Steele partnered with Joshua Ingber, assistant professor of economics at NMU, to work on the research. Ingber also attended the conference with Steele.

“I nominated Max to present at APEE's Young Scholars Program,” said Ingber. “Max had gone beyond the scope of an undergraduate assignment with his paper, elevating it to publication in Rural Insights, a resource for U.P. regional economic analysis.

“Max was competing against graduate, PhD and master's students, as well as other undergraduates. He presented his work in the public square of the conference, where attendees could view his work in between sessions.”

The APEE is an association of teachers and scholars from colleges and universities, public policy institutes and industries with a common interest in studying and better understanding the systems of private enterprise. APEE hosts an annual conference for members to share their scholarly findings.

Ingber stated that it was an honor that Steele was selected, and many economists  congratulated them on the research that Steele conducted.

Steele based his research on data from the federal and state level by the Bureau of Economic Analysis (BEA). Because of his selection to the Young Scholars program at the APEE conference, the BEA invited Steele to present in front of professional regional economists at the BEA.

Steele is still employed by Rural Insights, and has recently published a paper with Weronika Kusek, associate professor of earth, environmental and geographical sciences at NMU, about housing price dynamics in the Upper Peninsula. He is currently working on another paper regarding earned income tax credit and how it will affect the Upper Peninsula.