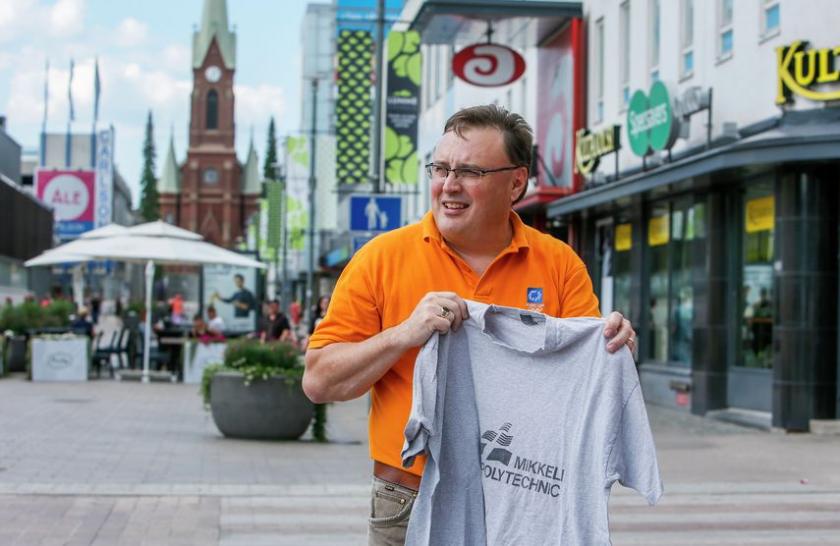 NMU professor Gary Brunswick spent part of his summer teaching a services marketing course to students from several countries at XAMK, South-Eastern Finland University of Applied Sciences. It was the sixth time he has taught at the school in Mikkeli since his first faculty exchange in 1995. The local newspaper, Lansi-Saavo, recently published a feature story on Brunswick.

Here is the English translation of the article:

The professor who has seen the change of Mikkeli.

When marketing professor Dr. Gary Brunswick from NMU or Northern Michigan University first came to Mikkeli to teach, the world was very different. It was the year 1995 and there was no parking hall under the marketplace and no shopping malls nearby it. Nokia was big and was to become world's largest mobile phone maker. Getting here involved a slow train trip from Helsinki to Mikkeli, and it took four hours with no  air conditioning in the train cars. Dr. Brunswick, who loves Coca-Cola, had difficulties finding this beverage in local shops because Pepsi was dominant in Mikkeli.

Now almost 25 years later air conditioned trains travel much faster and Coca Cola is easy to find from local shops. “The world has become more unified in many ways because of the media and the internet.” thinks Dr. Brunswick.

Teaching marketing to multinational groups of students in Finland is the same as in any place. The language of instruction during the international summer program here in Mikkeli is English and the same basic content can be taught all over world, taking into account key differences such as in the area of culture.  “I do lots of background work so I can have spot on cases and examples in my courses.” says Dr. Brunswick.

This summer Dr. Brunswick taught a course in services marketing here in Mikkeli at XAMK (South-Eastern Finland University of Applied Sciences). For three weeks students from Russia, Kazakhstan, Algeria, Hong Kong and Taiwan are enrolled in the course, which covers a broad range of topics in Marketing.  “We live in a world that is changing rapidly. Digital life has it problems, but also its own benefits, and has had a huge impact upon marketing” says Dr. Brunswick.

Dr. Brunswick has also seen many other changes in Mikkeli as this is his sixth time teaching here. During his first time teaching in Mikkeli the school was know as the Mikkeli Technical School, then it later changed to the  Mikkeli Polytechnic and after that MAMK, and now it is XAMK.  The XAMK – NMU connection was started in the 1990's as Mikkeli Technical School was part of an international student and faculty exchange program which included Northern Michigan University.  During 1995 Dr. Brunswick decided to come over to Finland and teach for the first time.  Dr. Brunswick recalls that during his first course here in Mikkeli it was primarily Finnish students who were enrolled, but over the years more and more foreign students came to Mikkeli to enroll in the international program's summer courses.

Mikkeli is not too exotic of a place for Dr. Brunswick given the similarities in nature and the climate compared to Marquette, Michigan.   Marquette is on the shores of Lake Superior, just as Mikkeli is surrounded by Lake Saimaa. Lots of Finnish immigrants moved to Upper Michigan back in the day and their influence can still be seen in the area. “We also have lots of snow during winter, even more than Mikkeli, and last winter we had several meters of snow” mentions Dr.  Brunswick.

As a marketing professor he is interested in business in Finland and our culture. On a personal note he especially likes outdoor marketplaces and flea markets which he visits frequently with his family. “It is fun to bargain with people from different countries. I was a little disappointed last weekend, because there was no outdoor flea market in the marketplace due to some events” says Dr. Brunswick as he glances at the large St Michel Summerfest tent at the marketplace. “I enjoy coming to marketplace to watch and listen to people. It is good that the town has this kind of meeting place. The pace of life over here is slower in a good way and people do not seem to be so busy“ said Dr. Brunswick.