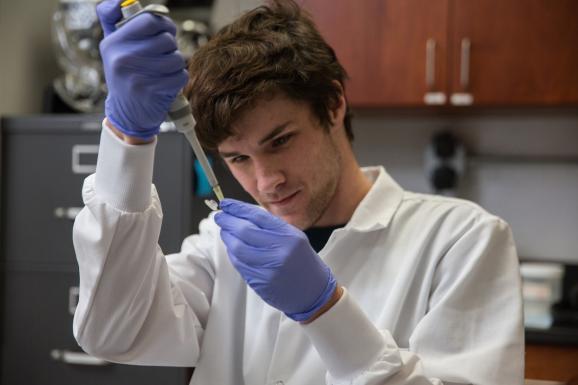 Northern Michigan University senior Kyle Flickinger will graduate on Saturday with a bachelor's degree in biochemistry. The Brimley native excelled academically, earning a summer research fellowship for his work with the Upper Michigan Brain Tumor Center, among other honors. But by supplementing STEM with diverse extracurricular activities ranging from athletics to music to theater, he is truly leaving NMU with a well-rounded education.

Flickinger received a $5,000 Anna and Rich Lundin Honors Summer Research Fellowship in 2018 to explore how a protein found in cancer cells might be prevented from reaching other healthy cells in the body, potentially increasing cancer patients' chance of survival. He attributes his success to the education he received at NMU and his experience working at the Upper Michigan Brain Tumor Center.

When it came time to declare a major at NMU, Flickinger said he chose biochemistry because he both enjoyed and excelled in his high school biology and chemistry classes.

“When I came here, I knew I wanted to do science and I liked biology and chemistry,” Flickinger said. “Biochemistry is a little bit different if you look at straight chemistry or straight biology. It's basically biology with a chemistry lens. There's a saying among scientists that 90% of what you do is going to fail. So being prepared for failure and having your own idea proven wrong by your own tests is actually a really valuable experience.”

In addition to studying biochemistry, Flickinger was involved in a slew of other activities throughout his undergraduate years, including being a member of the NMU Swimming & Diving Team, performing in theater productions at Forest Roberts Theatre and singing with the NMU Arts Chorale.

“I thrive off of being busy,” Flickinger said. “If I have any free time, I will put something else on my plate because I really don't like having time to myself.”

As a member of the NMU swimming and diving team, Flickinger competed at the Calvin College Invitational all four years, the Great Lakes Intercollegiate Athletic Conference his sophomore and junior years, and nationals his junior year. During the 2017-2018 season, Flickinger won the three-meter dive at the 2018 Fazoli's Invitational before advancing to the NCAA Division II Championship Diving Qualification meet. He also won a pair of victories against Findlay in the three-meter dive during his junior campaign.

Some of Flickinger's most memorable theater performances at NMU include Beauty and the Beast (Lumiere), Tarzan (Ensemble) and The Bold, the Young and the Murdered (Dr. William Bradley / Tyler Tripodo).

Flickinger will continue his education this fall at the University of Wisconsin-Madison, where he will pursue a doctorate in biochemistry.

“I decided to attend UW-Madison because it houses a wonderful graduate student-driven program,” Flickinger said. “The research is done completely by grad students, whereas at other universities, research is conducted by post-doctoral students that have already earned their PhDs. Going to UW-Madison provides more opportunities for me in my field of study.” 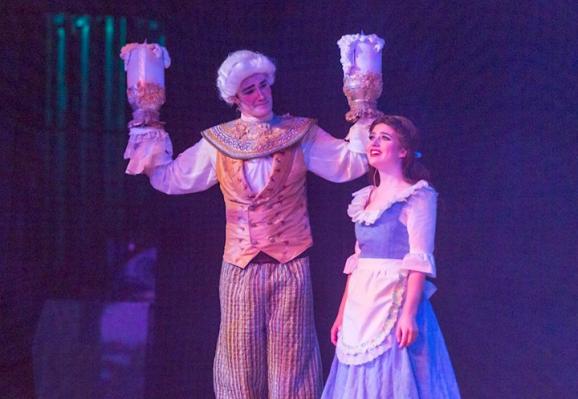 Flickinger (left) as Lumiere in 'Beauty and the Beast'
Prepared By