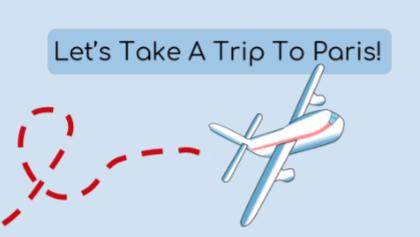 Northern Michigan University has not let COVID-19 disrupt its French Camp for Young Learners, a 15-year collaboration with a local elementary school that provides students with basic knowledge of French language and culture. The silver lining of this year's modified, virtual format is that the efforts of NMU students have the potential to reach a much larger audience.

The content is typically delivered in person over four days—two in the fall semester and two in winter—to a limited number of students at Sandy Knoll Elementary School. NMU intermediate French students had worked with elementary groups at Sandy Knoll during the fall, but expressed disappointment at being unable to see the children this semester. So NMU Professor Nell Kupper came up with the idea of turning the final virtual tour into a Paris treasure hunt.

“The project not only serves the circumstances under which we currently exist—allowing young children to explore outside of their home and culture virtually—but also inspired the NMU intermediate French students to contribute in a wonderful way to the community,” Kupper said. “This interdisciplinary project is designed for elementary and middle school children. It draws from geography, map reading, visual art, aesthetics, French culture and French history.”

Kupper's students researched topics and created slides that were arranged into a presentation that will remain available for Sandy Knoll's use for as long as desired.

“After I sent the project to Sandy Knoll, I received a request from the Upper Peninsula Children's Museum requesting access to the treasure hunt for their members who are home from school and unable to attend museum activities,” Kupper said. “The French program at NMU has had a 12-year partnership with the U.P. Children's Museum. They will be sending out the treasure hunt to 5,000 members.”

The final day of French Camp for the academic year is a lesson on fine arts with vocabulary for colors, shapes, art movements and painters. Kupper said the conclusion to that day is a virtual tour similar to the treasure hunt project, concluding with a walk-through of the Musee d'Orsay, looking at paintings and using the vocabulary they learned to describe what they see.

"I had quite a few kids take their trip to Paris," wrote Sandy Knoll teacher Mindey Talus in an email to Kupper. "All of them said it was really fun. Even a few parents have said they liked it. I do want to thank you and your students for making this scavenger hunt for the kids. I have been trying to provide things for them that aren't just answering questions and doing a bunch of math problems. So this was the perfect assignment for them."

Whether the camp is offered in person or online, Kupper said it gives NMU French students an opportunity to review and improve some of their linguistic skills and cultural knowledge, while also planning a way to teach those to younger children. Kupper can be reached at nkupper@nmu.edu.

A rhyme on one of the slides reflects the current state of affairs:

Since we can't come to Sandy Knoll

Please join us instead for a Paris stroll

There are many treasures in this city

Art in all its museums is very pretty

We worked a lot on this project to be sure

that you enjoy this virtual tour

We bring the fun of French to you

Your friends in French class at NMU