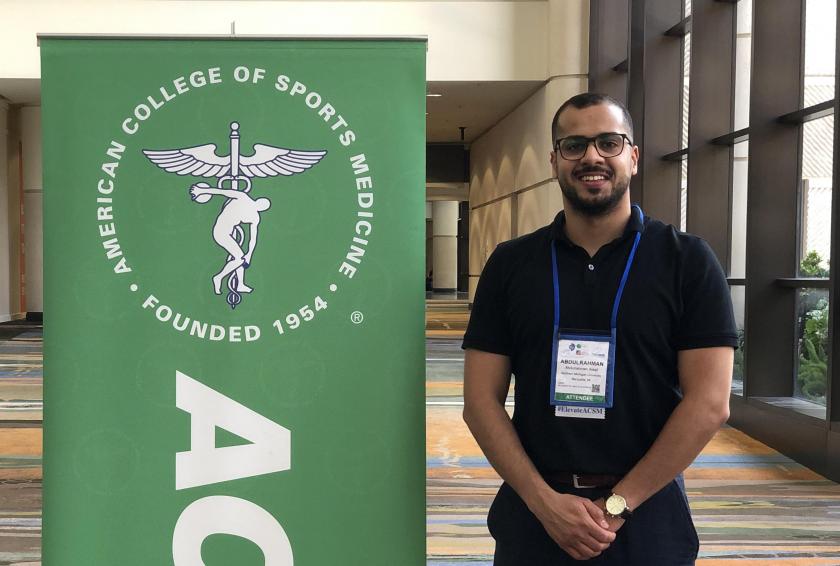 Alaqil at the American College of Sports Medicine annual meeting in Orlando earlier this year.

Inspired by the death of a longtime friend at the age of 20—likely attributed in part to a sedentary, unhealthy lifestyle—exercise science graduate student Abdul Alaqil plans to focus his career on health promotion activities geared toward the pediatric population. He also established a foundation for that cause in his native Saudi Arabia.

Alaqil still gets emotional talking about his impactful loss. The two men had been close since meeting in elementary school. As adults, they lived on different floors of the same house and had fun on frequent travels. But their average daily routines diverged significantly. Alaqil was a track-and-field athlete “obsessed” with nutrition, building strength and improving his performance in the discus. He went to bed early.

“My friend was obese, smoked a lot, ate unhealthy food, always played video games and stayed up until 4 a.m.,” said Alaqil, who was an undergraduate physical education major at the time. “He was hospitalized two times; the last was with water in his lungs and trouble breathing. That is when I knew it was very serious and became determined to help him address his problems.

“I quit track and field to focus on him and visit every day. I told the doctor I wanted to work with him because I had exercise physiology in my head, but was told they had certified personnel for that. Still, I went with him to the fitness center at the hospital. The last day, everything was good at the gym. He asked me to pick up some magazines. When I came back later with those and some pizza for the nursing staff, he wasn't in his room. They told me he had passed away.”

After his friend's death, Alaqil completed his undergraduate degree, secured a teacher assistant position at a Saudi school and started a foundation to promote health-related fitness to the general population.

Alaqil later obtained a full scholarship to study in the United States. He searched for graduate programs in exercise science while working briefly as a technician in a cardio lab in Texas and settled on Northern. Alaqil arrived in Marquette in May 2017. As an older student of 27 who had spent all but one of those years in Saudi, his first language of Arabic was more firmly entrenched. He enrolled in the English Language Institute on campus for his first two months, recognizing the challenge he would face understanding English terminology for exercise science concepts on top of basic conversational phrases.

In April, Alaqil presented a paper on the accuracy of cardiorespiratory fitness to predict cardiovascular disease in children at the Northland Chapter of the American College of Sports Medicine spring meeting in Minneapolis. He is actively working on his related thesis. With the local team involved in Michigan State University's Spartners for Heart Health program, Alaqil recently spent eight weeks helping Ishpeming and Marquette elementary students improve nutrition and physical activity behaviors.

“We focused on healthy food, talking about how many servings of vegetables, whole grains and proteins they should have. They called me Carrot Man because I usually brought those to the schools. They loved them. If they were offered a granola bar, they would say, ‘No, we need carrots.' We also talked about reducing screen time to less than two hours and why they should not drink soda.”

While growing up in the Saudi capital of Riyadh, Alaqil recalls receiving very limited health-related information beyond the importance of drinking milk and practicing good oral hygiene. He said his goal is to return to his homeland and improve that, after he graduates from NMU in December and completes a doctorate in physical education promotion elsewhere.

“It is hard to convince people to change their lifestyles,” he said. “No one's going to trust you if it's not based on science or compassion. In Saudi, there is mandatory physical education one to two days per week, but it is mainly for entertaining activity, not learning that will motivate children to change behavior. I believe it should be a focus on material and also play. Physical activity starting at a young age can benefit health and decrease risk factors in the future. I want to show its cardiovascular, strength and flexibility benefits.”

Alaqil's obvious passion is fueled by his continuing desire to ensure that fewer youth will risk suffering the unfortunate fate of his childhood friend.