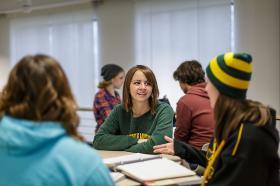 Farkas said she applied for the grant because she has talked to a number of students who don’t believe their voices count in society.

“Their self-efficacy as agents of change is low to nonexistent,” Farkas said. "However, I have also witnessed what happens when students are provided literacy tools and the instruction on how to use the tools to critically read the world—they become agents of change—they make the world a better place. I also applied for the grant to discuss with my colleagues how we can better equip our students to civically engage in society through the content in our courses and the skills we want them to take away from our courses.”

Farkas used grant funding to purchase relevant texts for her and a group of English faculty to read and discuss ways to implement civic learning in the classroom setting. Once discussions are completed, a proposed action plan along with the group’s findings will be presented for further discussion at the departmental level.

“We will discuss how to integrate our work into the current general education program,” Farkas said. “However, some of our preliminary discussions have resulted in adopting Writing My Wrongs by Shaka Senghor in 18 sections of the College Composition I course and three sections of Approaches to Academic Literacy and Study to explore the social issues of poverty and racism. Additionally, four academic literacy and study instructors adopted a critical social justice framework to teach in their courses.”

The collaborative team hopes to create an English general education program that will include foundational content and skills needed for civic engagement. She said the program will help students empower themselves through literacy and help them develop agency to act upon the world in ways that promote equity and justice for all citizens.

According to a 2012 study, most civic-oriented studies occur in the first two years of a student’s academic career and then the number of civics classes diminish as students move into more concentrated academic studies. The AAC&U has developed resources like Civil Prompts to offer processes for professors and department leaders to make civic learning customary for students.