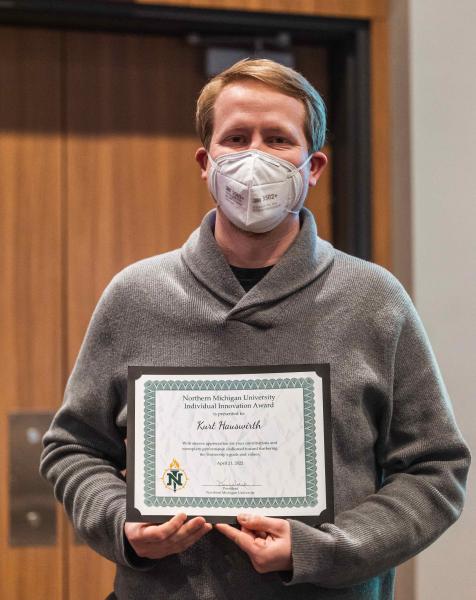 Kurt Hauswirth, producer, host and announcer for WNMU-FM, is one of Northern Michigan University's 2022 Individual Innovation Award recipients for his passion and determination to embrace new technologies and improve existing technologies to create new opportunities.

At the beginning of the pandemic, WNMU-FM did not have a method in place to broadcast outside of the studio, thus requiring the staff to work inside the studio daily, regardless of the pandemic and putting themselves at risk.

“The previous year, Kurt had spent an enormous amount of time learning how to maximize the use of our automation system called Enco,” stated his nomination. “Kurt discovered that they had a feature that would enable us to log into the system remotely and petitioned the manager to budget this feature in. He was successful in upgrading the system.”

The Marquette native took it upon himself to learn the system and then train the other announcers on how to use it. This led to a feature article being written in the national broadcast magazine Radio World featuring Hauswirth and WNMU-FM, which brought recognition to Hauswirth, the station and NMU as a whole.

The upgraded system allowed announcers to broadcast directly from home, fix any computer or automation issues and monitor student workers and assist them during their on-air shifts as needed.