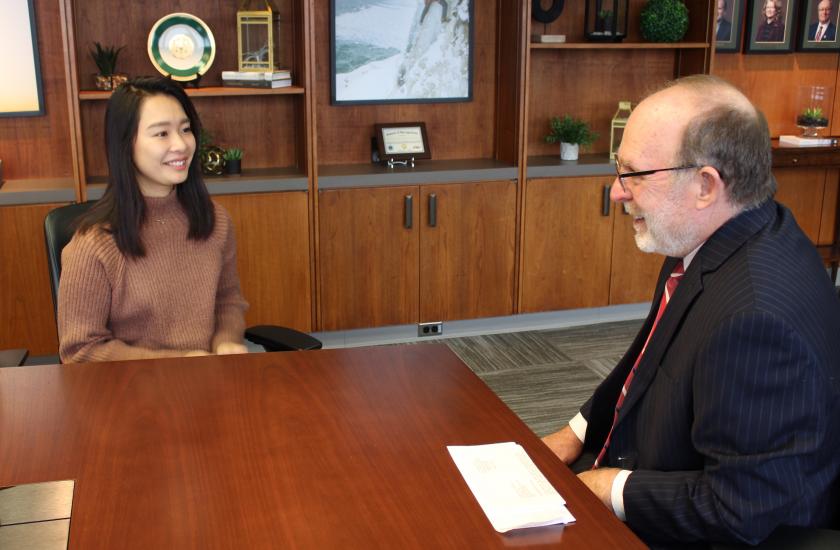 In each of the 40 years Marquette has had a Sister City relationship with Higashiomi, Japan, NMU's president has sponsored a student to attend the university. The 40th Japanese scholar, Ami Nakadera, recently delivered a letter from the mayor of her city to NMU President Fritz Erickson.

Nakadera was enrolled in English, American government and international studies courses for the fall semester that just ended.

“I like the classes better; the teachers and students are close,” she said. “It is easy to get involved here. I had to overcome fear. I did not like to speak English in front of speakers with that as their first language. I want my family to see how I changed from this study abroad.”

With more than 114,000 residents, according to the city's official website, Higashiomi has a larger population than Marquette. One similarity shared by both cities is that they are located near the largest bodies of freshwater in their respective countries: Lake Biwa and Lake Superior.

“But Lake Superior is much bigger,” Nakadera said. “It is so clear and nice. Everything is so beautiful here—the water, the colorful leaves.”

Nakadera described American food as “surprising.” She said U.S. television programs and movies she saw prior to studying here often depicted people eating pizza. After arriving on campus, she said she saw people “eating pizza and burgers every day.”

NMU also hosted representatives of the Consulate-General of Japan in Detroit in August. They were visiting Marquette to celebrate the 40th anniversary of its Sister City relationship with Higashiomi

“We talked a lot about how we're trying to build a cybersecurity ecosystem throughout Marquette—not only academic offerings, but non-credit programs—and the impact this could have on the local economy,” said Steve VandenAvond, vice president for Extended Learning and Community Engagement, immediately after an NMU group met with Nakagawa. “We also discussed whether students in Japan might be interested in cybersecurity programs and how Japanese companies in Michigan and Ohio might benefit from talent development in this area.”

Nakagawa commented after the meeting with NMU representatives that he was “impressed with the collaborations the university has” with K-12, higher education, business/industry and nonprofits, which helped it secure Marshall Plan funding for the U.P. Cybersecurity Institute.

“It was a productive conversation and very informative,” he added. “I got to know it very well what NMU is doing in cybersecurity. It is also very new to Japan and Japanese industries, with huge demands for talented people.”