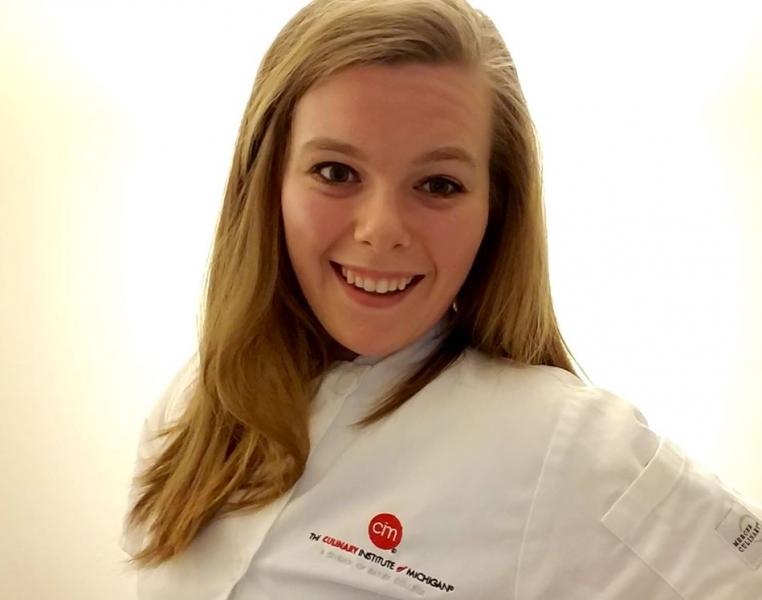 Crissa Karavas, who earned her NMU degree in hospitality and tourism management with a minor in entrepreneurship in May, recently received the Martha Griffiths Award from the American Association of University Women Marquette Branch. The award is presented annually to a “high-achieving graduating female senior at NMU with high involvement in her discipline.”

Karavas worked more than 40 hours per week as a kitchen manager at Doncker's restaurant while attending Northern as a full-time student and graduated with high honors. She was student president of the NMU Hospitality Club, which contributed to the Salvation Army's Toys for Tots efforts during the holidays. She also spearheaded the re-establishment of the Memorial Chili Challenge and was instrumental in launching NMU's first hospitality-specific job fair.

AAUW Marquette Branch's newsletter stated that, although more than 50% of culinary school graduates are women, less than 7% of executive chef positions are held by women at leading culinary organizations and only 19% of chefs and head cooks are women. One of Karavas' nominating instructors stated that she will play a role in changing the stigma associated with leadership in the hospitality industry.

“She is an outstanding example of determination and success at anything she chooses to apply herself to,” stated the nomination letter. “Ms. Karavas stands out in the food service industry, as she desires to be a female leader and entrepreneur. She acts as a role model and inspiration to every life she touches. It is not often that a professor can place their full faith in a student to accomplish as much as Ms. Karavas does at such a professional level. The Hospitality and Tourism Management program is truly excited to have been a part of her development and will take pride in watching her become a successful mentor, business owner, and overall powerhouse in our industry.”

At the time award nominations were accepted, prior to COVID-19's escalation, Karavas planned to continue working at Donckers for the near future. She hopes to someday study pastry techniques, possibly in Europe, and open her own bakery or pastry shop.

There were 16 nominees this year who typified the leadership and drive of the award's namesake, Martha Griffiths. According to the AAUW Marquette Branch newsletter, Griffiths was one of Michigan's most influential women legislators in the last half of the 20th century. She was known for her efforts in the Civil Rights Act and for getting the Equal Rights Amendment to the House floor for a vote in 1970.

AAUW of Marquette honored Crissa for her “demonstrated promise and achievements to advance equity for women and girls through advocacy, education, and entrepreneurial work.” Her Martha Griffiths Award included a certificate, congratulatory letter and $500 check.