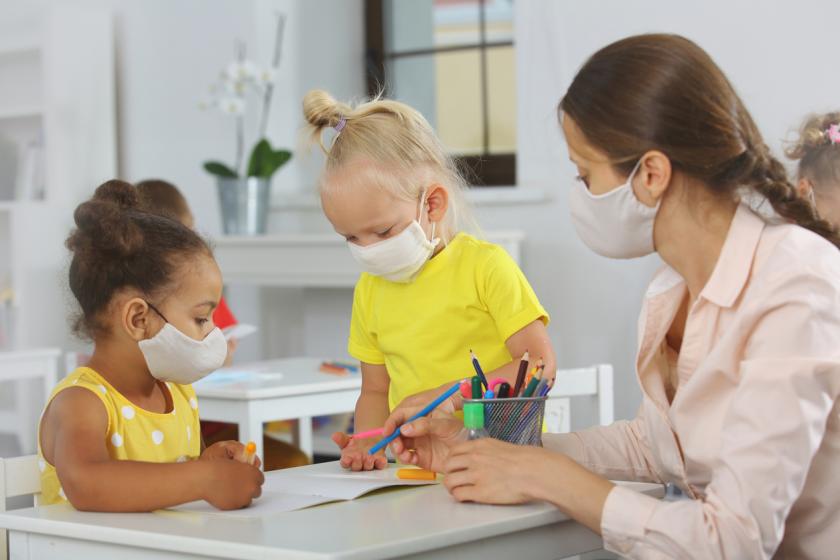 Efforts to improve child care availability and affordability in the region received a major boost this week when Gov. Gretchen Whitmer announced that the MI Tri-Share Child Care pilot program would expand to seven new facilitator hubs across the state, including the Marquette-Alger Educational Regional Service Agency. It was MARESA's partnership with Northern Michigan University—the first local employer to sign up for the program—that helped to secure $300,000 from the state for the hub's pilot year.

Tri-Share is intended for families who do not qualify for other subsidies, but whose incomes fall within 185-300% of poverty level. Child care costs are divided evenly among parents, their participating employers and Tri-Share funding. NMU agreed to sponsor 15 families in the first year.

As a facilitator hub, MARESA will serve as an intermediary between these entities and child care providers. It will also provide overall program and fiscal management.

“Support from NMU has played a pivotal role in obtaining the funding for this effort,” said Lyndsay Carey, MARESA's director of early childhood education. “Early childhood is a critical time in a child's development. Tri-Share funding gives parents the support they need to continue to access childcare from a licensed provider. A huge benefit for participating businesses is the positive impact that affordable childcare will have on recruitment and retention of employees with young children.”

Carey's vision for the future includes workforce development and child care expansion. Through an initiative developed in collaboration with MARESA's Career and Technical Education program, local school districts and community partnerships, high school students will have the opportunity to explore early childhood education as a potential career pathway while alleviating the shortage of providers in the local community.

While the child care crisis is national in scope and contributes to workforce shortages, its impact can be magnified in rural, remote areas such as the Upper Peninsula. Great Start to Quality and the U.P. Child Care Task Force surveyed more than 1,300 parents last year and found that 71% of those in Marquette and Alger Counties were unable to find sufficient child care.

As a single parent of a 3-year-old, NMU English Professor Rachel May is well-acquainted with the challenges.

“Trying to navigate child care in a child care desert is tough, and the cost is enormous; it eats up a significant portion of a parent's income,” May said. “I wanted to try to help in some way because I know there are people in tougher situations than mine. It became a passion project.”

May and Shilpa Jhobalia co-organized an NMU task force last fall and joined with early childhood educators to explore the issue. May said Carey was instrumental in facilitating the Tri-Share effort, and NMU Interim Provost Dale Kapla and President Kerri Schuiling were highly supportive.

“Michigan has made a big investment in child care this year,” May said. “When we learned about the Tri-Share opportunity, one of our goals was to apply for the program and see if NMU could partner with a community entity in some capacity. It is exciting that Lyndsay took on the role of point person at MARESA and collaborated with NMU to make the Tri-Share program happen in the U.P. And as the first employer to sign up, Northern is helping to lead the U.P. in addressing the child care crisis and making working families' lives easier.”

Tri-Share now covers 52 counties in Michigan, plus the city of Detroit. While its MARESA hub will provide some relief locally, the NMU task force's work is far from over.

Co-organizer Jhobalia is a stay-at-home mom of three under the age of 5; her husband is an NMU faculty member. She is involved with several parenting organizations and was invited to participate in a fall forum hosted by MARESA, where child care was identified as one of the top three community priorities. Jhobalia said she has heard of providers whose waitlists extend one to two years out.

“The people who perhaps struggle the most with this are the ‘transplant' families who move to Marquette and do not have any relatives in the area to help out with child care support,” she said. “Health care workers also have a hard time if they're on 12-hour shifts or a night shift. It's getting to the point that some parents are even posting requests for help online, trying to find someone–even a stranger–to watch their kids so they can work.”

Jhobalia said some parents, especially with infants, simply can't return to their jobs because child care is not available or affordable. This contributes to overall workforce shortages.

The NMU  task force is exploring the possibility of opening an early childhood education center on campus. The center would serve as an interdisciplinary learning lab for NMU students. The task force is also working with community partners and NMU education professors to create a pipeline of qualified workers as a potential solution to the child care staffing shortage.