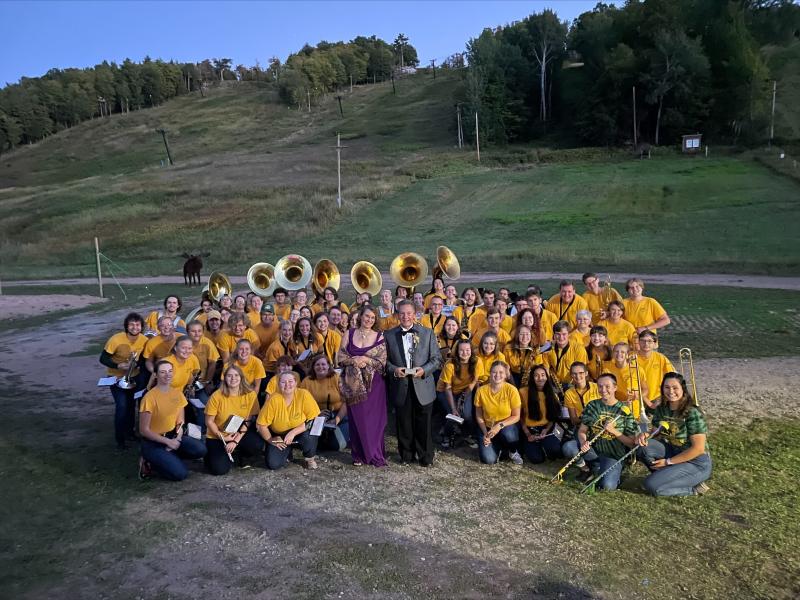 Grugin (front center with his wife, Betsy) and NMU band members at the awards event.

Five Northern Michigan University alumni, faculty and staff were among 11 recipients of the 24th annual City of Marquette Art Awards, presented Sunday, Sept. 12. The red-carpet affair honored outstanding individuals who have made an impact on arts and culture in Marquette.

NMU Music Professor Stephen Grugin earned the Lifetime Achievement Award. Grugin is in his 25th year as the director of bands and professor of low brass at NMU. He conducts the University Symphonic Band, Wind Ensemble and Wildcat Marching Band.

Grugin is the conductor of the Marquette City Band and has also conducted the Marquette Symphony Orchestra in its annual “Sounds of the Holidays” concerts. He conducts and performs with the annual TubaChristmas and Octubafest ensembles in Marquette. He is also active as a music arranger and has traveled extensively as a guest conductor.

NMU contingent professor and alumnus Marty Achatz ('91 BA, '93 MA, '03 MFA) was the Arts Advocate Award recipient. The Ishpeming native served two consecutive terms as U.P. Poet Laureate and served on the board of the Peninsula Arts Appreciation Council for more than 15 years.

Achatz published his poetry collection, The Mysteries of the Rosary, with Mayapple Press. He has also released several spoken word albums. Achatz appears monthly on the syndicated radio variety show The Red Jacket Jamboree, recorded at the Keweenaw Storytelling Center in Calumet, for which he also writes scripts.

Achatz serves as the adult programming coordinator for Peter White Public Library. He was instrumental in securing a $20,000 NEA Big Read Grant for Peter White Public Library, for Joy Harjo's book An American Sunrise. As part of the Marquette Poets Circle, Achatz has participated in and organized readings, art exhibits and fundraisers for local causes, including the Warming Center and Room at the Inn.  He has won numerous awards for his teaching and writing.

NMU alumna Lynne Bolitho ('66 BS) was named the Arts Educator Award recipient. She developed her lifelong love for dancing, most notably ballet, at a young age. She has studied Cecchetti, Russian, French and Bournonville styles of dance and with numerous well-known teachers.

Bolitho pursued business at NMU and taught the subject for 37 years, at Northern part time and then at Ishpeming High School. During her first years in Marquette, she taught a few ballet classes at K.I. Sawyer and then later in the Outreach Program at Northern. Then she opened Marquette Center for Dance with Dawn Dott in 1981, and they remained partners for several years. For the next 24 years, she taught both high school business and ballet every day, including weekends. Bolitho has written seven original full-length ballets for dance recitals.

Director of the Beaumier U.P. Heritage Center and NMU alumnus Daniel Truckey ('90 BS) earned the Performing Artist Award. During the past 33 years, Truckey has performed his songs in clubs, coffee houses, bars, festivals and concert halls from Connecticut to Nebraska. He has made Marquette his home base for the past 14 years.

In addition to his career as a museum curator, Truckey is a singer-songwriter and musician who has played in everything from jazz/blues combos to rock bands and most recently with the Celtic trio, The Knockabouts. He has also carved out a life as a solo artist and has recorded six solo albums and one as a duo with his brother, Drew Truckey. His most recent album, “The Incurable Romantic,” features 15 songs about the romance of life, in all its many forms. He is also the coordinator of the Marquette Rockestra and has played in two local rock bands, The Geezers and Norwegians Would.

Holliday was raised in Marquette. During his career, he created scenic and lighting designs for university, community and professional theaters in Michigan, Wisconsin, North Carolina and Hawaii. He has created 220 scenic designs and more than 200 lighting designs. He also executed, or assisted in the execution of, most of these designs as technical director, electrician, carpenter, props master, painter or stage manager.

Learn more about how the event went and about the awardees at https://www.facebook.com/CityofMarquetteArtsandCultureCenter.