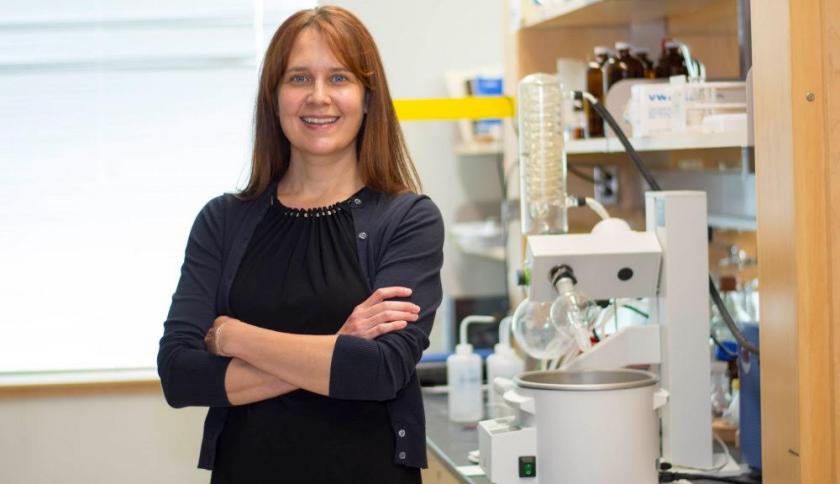 Mattson in her laboratory at WPI

As a biochemist working to develop new molecular methods for synthesizing treatments for drug-resistant cancers, Anita Mattson is combining the skill sets she developed at Northern Michigan University and in graduate school. Like her NMU professors, the Marquette native is also committed to involving undergraduate students in research. She leads the Mattson Group laboratory at Worcester Polytechnic Institute and is the recipient of NMU's 2020 Alumni Achievement Award.

Drug resistance is a common problem in chemotherapy. Cancers that at first respond well to commonly used treatments such as cisplatin suddenly begin to grow again.

According to a press release, Mattson is focusing on a group of naturally occurring molecules known as dimeric chromanones. Derived from various strains of fungi, chromanones have high biological activity, which makes them attractive targets for drug discovery. The challenge is that they are extremely difficult to synthesize.

Mattson believes the solution might lie in silanediols, organic compounds commonly used to create polymers for health and beauty products. In 2017, she received a $1.7 million grant from the National Institutes of Health to support her related research.

“Our group was the first to demonstrate the utility of silanediols as catalysts,” Mattson said. “They can form hydrogen bonds with negatively charged regions of the target molecule. Their ability to access and control the molecular structure of a number of difficult-to-synthesize compounds such as chromanones could lead to the development of a wide range of new pharmaceuticals and agrochemicals.

“Sometimes natural products are not good for drugs that humans would take. Maybe they're not soluble in water or they're toxic. The key is to adjust their structure and make natural product analogs more suitable for drug discovery.”

Her undergraduate experience at NMU helped to lead Mattson down her current research pathway. The 2002 graduate had worked with Chemistry Professor Frankie McCormick to develop a new methodology to get silane chemical compounds to serve as replacements for tin compounds.

“Tin was toxic, so we were trying to develop methods that were an improvement over what was currently available. We discovered a new method that took advantage of polarity reversal catalysis in the context of radical reactions, with silanes as replacements for tin.

“I started NMU planning to be a pre-med major. When I took a general chemistry class with Thomas Getman, I loved it. He was a fabulous teacher. So I pursued chem as a major, still planning on pre-med. Then I had professor [Donald] Marquardt and did the research with Frankie. That was it. After all those experiences, I was sold on chemistry research as a career. My professors definitely influenced me and prepared me with the initial skill set. When I got to grad school, I was surprised how hands-off the professors were by comparison.”

As a graduate student at Northwestern University, Mattson joined the group of Professor Karl Scheidt and developed new thiazolium-based strategies for acyl anion addition reactions. In 2007, she completed her doctorate and became an NIH postdoctoral fellow in Professor Michael Crimmins' group at the University of North Carolina at Chapel Hill, where she investigated a highly convergent approach toward hemibrevetoxin B.

Both of Mattson's parents are also NMU alumni: father Miles ('71) and mother Nancy ('68), who still reside in Marquette.