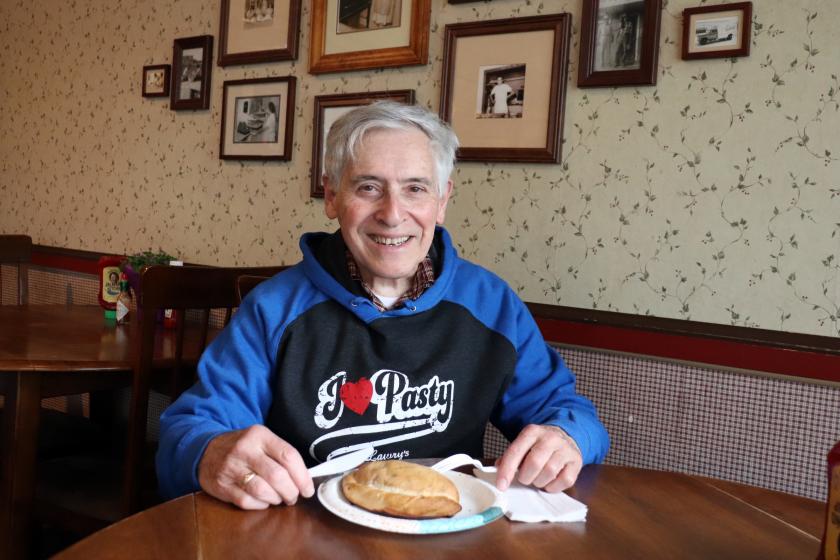 Magnaghi lunching on an iconic pasty at Lawry's in Marquette

In his newly published book, “Classic Food and Restaurants of the Upper Peninsula,” Northern Michigan University History Professor Emeritus Russell Magnaghi explores the origins of the iconic U.P. trio: the pasty, cudighi and fudge. He also delves into the evolution of the regional diet, which was rooted in the indigenous foods consumed by Native Americans and influenced by immigrant settlers representing numerous nationalities who introduced additional fare from their home countries.

The book highlights the restaurant culture that emerged in response to increased tourism, along with efforts to preserve and promote U.P. foodways. It also touches on classic beverages, including the Anaconda cocktail and Peter White Punch. Both are among the recipes featured in the appendix.

Classic Food and Restaurants of the Upper Peninsula was decades in the making. Magnaghi grew up in restaurant-rich San Francisco, Calif., working in his dad's Swiss Italian Sausage Factory and enjoying summers amid the orchards in the Santa Clara—now Silicon—Valley.

“I arrived in Marquette in 1969 to teach at NMU,” he said. “Knowing the dominant nationality represented in the region, one of my first questions was, ‘Where is the best Finnish restaurant?' My roommate at the time, who was a Pelkie native, responded, ‘Finnish restaurants do not exist here because Finns only eat fish and white food,'” said Magnaghi with a chuckle. “My quest for the food heritage of the region began at that moment, since everyone has a food-related story to tell.”

Other notable crops introduced to the Upper Peninsula included potatoes, rutabagas and the lesser-known celery, which was cultivated in Newberry beginning in 1886 and used by hotel dining rooms in Chicago and New York City. The local athletic teams were known as the Celery City Cagers and Celeryites, according to Magnaghi's book.

Scores of immigrants lured to the region in the mid-19th century by employment opportunities in the burgeoning mining and timber industries further influenced the U.P.'s food heritage. Those who hailed from Cornwall in southwestern England continued the pasty tradition that their ancestors began in the 1300s. They carried the self-contained, crust-encased pies of meat, vegetables and seasonings into the mines because they made a filling, handheld lunch. Pasties (pronounced PASS-tees) became popular with U.P. residents at large.

Northern Michigan University and Michigan Tech dining operations have long served them to students. Magnaghi added that NMU students baked the largest pasty ever, though it was not officially recorded by Guinness World Records. The filling—250 pounds of beef, 400 pounds of potatoes, 75 pounds of carrots and 25 pounds of onions—was wrapped in 250 pounds of dough and cooked in an outdoor oven. Controversies have ensued over the years as to the exact ingredients that should go into a pasty.

Cudighi sausage, another U.P. staple, was first served by northern Italian immigrants in the 1930s.

“The word ‘cudighi' had baffled local food historians because it does not appear in an Italian dictionary,” he added. “But in 2017, a woman provided the answer. Her grandfather, Mario Gallizioli, came to the U.S. from an area north of Milan, Italy. The word ‘cudeghi' comes from the Bergamasque dialect, which is not officially a written language, and has several spellings. It was probably the local adaptation of the more standard ‘coteghino,' a type of sausage.”

Gallizioli is billed as the “father of the cudighi,” though he made his with 20% venison or lean beef rather than strictly pork. Different families are credited with increasing its popularity, including the La Frenieres and Barbieres in Ishpeming. Felice Barbiere was permanently injured in a mining accident and couldn't work, so his family suggested he start making his fried cudighi in large quantities and selling it from his shop. He always served it with mustard and fresh onions on a bun. Ground versions of the sausage are commonly used on pizza and in egg dishes.

“Mackinac Island fudge originated with Murdick's Candy Kitchen in 1887,” Magnaghi said of the third iconic U.P. food. “Rome Murdick came up with the idea not only to sell fudge, but also to make it on a marble slab in front of the customers a create a show for them as he paddled the cooling fudge. He found the process was as important as the fudge itself, and that continues to be a highlight for visitors. The ‘King of Fudge' title was given to Harry Ryba, who set up shop on the island later and was a big promoter. He played a role in creating the Mackinac Island Fudge ice cream flavor, which became an immediate hit.”

Classic restaurants featured in the book range from Clyde's Drive-In locations to chop suey cafés that capitalized on a national craze and were scattered throughout the Upper Peninsula. Magnaghi also addresses woodland restaurants such as the former Camel Riders Inn south of Munising, dining saloons in steamers that traversed the Great Lakes, the culinary heritage of lumber camps, the supper club and Friday fish fry traditions that gained traction in the Upper Midwest, and salad bars that formerly permeated the U.P. restaurant culture.

The House of Ludington in Escanaba, which opened in the 1860s as the largest hotel north of Milwaukee, is one of the fine dining establishments referenced in the book. Legendary owner and master chef Pat Hayes continued its legacy of impeccable food and service when he gained a national reputation for creating elaborate themed culinary events beginning in 1939 and lasting for 30 years.

“Under his direction, the restaurant hosted governors, senators, industrial leaders and TV personalities,” the book states. “But his attention to detail extended to local diners as well. He used to say, ‘I can prepare and serve anything the Waldorf Astoria [in New York City] does,' and he often did. He could readily prepare ‘baked squab in cantaloupe and stuffed with brandied peaches served under glass' or a fine steak, but he only prepared well-done steaks with poorer cuts of meat, saying, ‘That's no way to treat fine meat.' For a hunter's dinner one year, he served flaming pheasant on a sword.”

The chapter titled “Immigrants and Food” includes bakeries, a profession dominated by the Finns and Swedes; confectioners from Belgium, Greece and Lebanon; Italian cheese factories; and Croatian chicken, which has been a favorite at summer fairs and fundraisers since the 1980s.

“The bottom line is that the Upper Peninsula has a signature food culture that is worth sharing and celebrating,” said Magnaghi, who completed the project during the pandemic. “It may not be as varied as you find in major cities, but by building on the indigenous foods that were readily available in the woods and waters, it is uniquely U.P.” 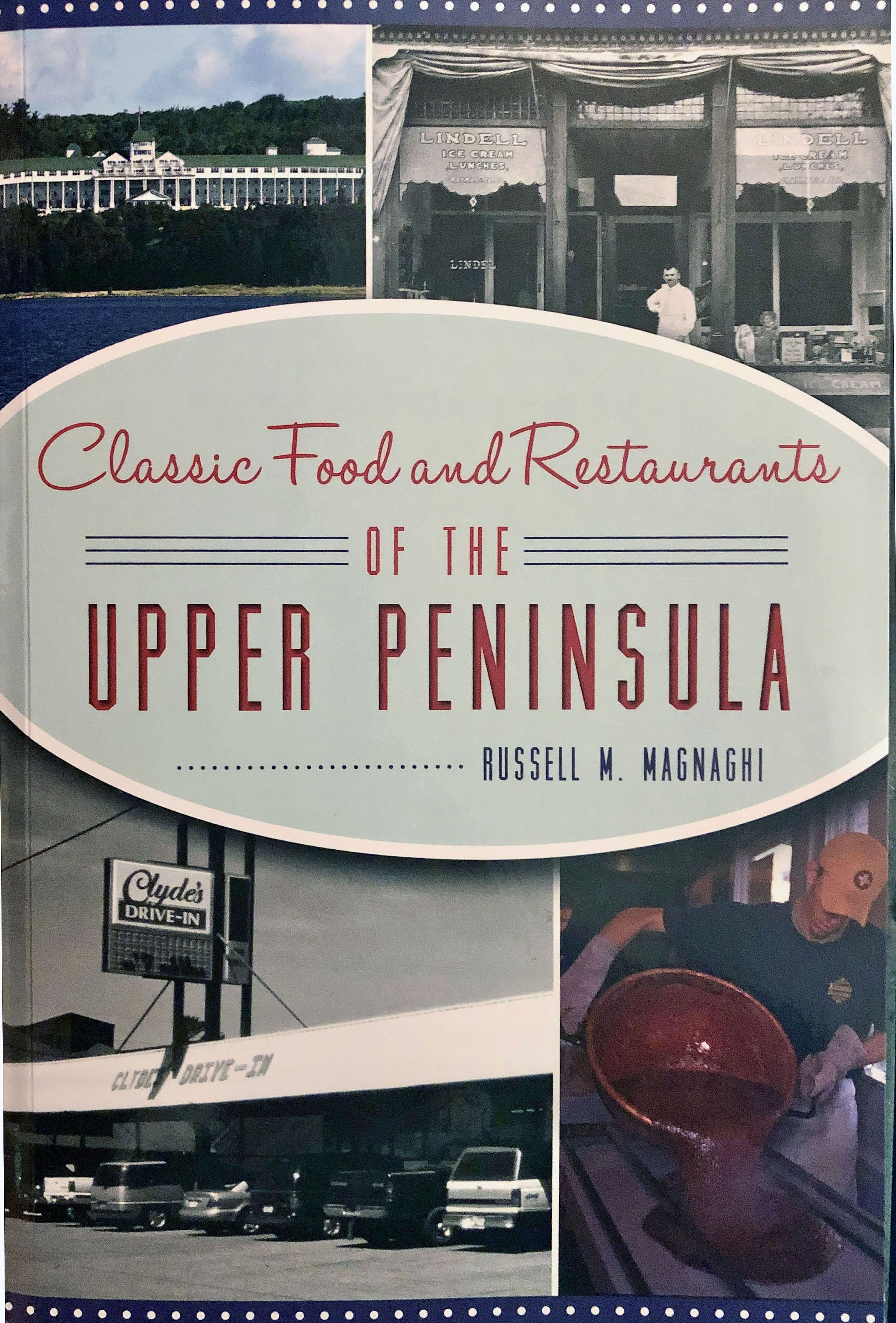