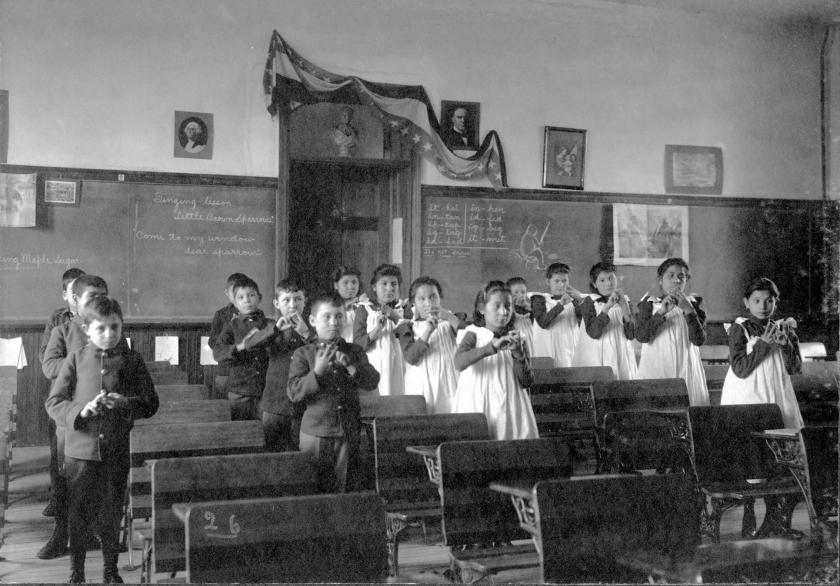 The history of Indian boarding schools was formally investigated and documented for the first time in a sobering report released in May by the U.S. Department of the Interior. Thousands of Indigenous children were forcibly removed from their homes and placed in residential schools—including five in Michigan—with the goal of assimilating them into white culture and, consequently, taking their territories.

The children were often abused, some died while attending and many did not return home. Northern Michigan University, which offers the state's only bachelor's degree program in Native American studies, has offered a course on the subject for more than 15 years.

“This is a required course in the major because we believe it is important for all students to learn about how it started, who was involved, and how a systemic effort on the part of the federal government and religious institutions made boarding schools U.S. policy for 150 years,” said Professor April Lindala, who now teaches the course developed by retired colleague Grace Chaillier. “We need to address what causes something like this to happen and how we can prevent it from happening again.

“I don't know of any Native American adult who hasn't personally been impacted by boarding schools; it's part of my family's history. But we've navigated through a society that had little knowledge of the atrocities committed at these institutions, until children's burial sites started being discovered at them and made the news. When I came to the U.P. as a student at Northern, some of my undergraduate friends had been to those schools because they were still operating not long before that.”

Lindala described the federal government's willingness to acknowledge the existence of Indian boarding schools and launch an investigation as “an incredibly significant step.” She said the topic is important in understanding the collective history of Indigenous peoples in the United States and Canada.

The Department of the Interior report shows for the first time that between 1819 and 1969, the United States operated or supported 408 boarding schools across 37 states (or then-territories). Roughly half were staffed or funded by a religious institution, most commonly the Catholic Church. At least 53 burial sites for children were discovered across the system, with more expected as the research continues.

The five Michigan schools identified were: the Catholic Otchippewa Boarding School, or Otchippewa Day and Orphan Boarding, in the U.P.'s Schoolcraft County; the Old St. Joseph Orphanage and School in Assinins, or Baraga Chippewa Boarding and Day School) near Baraga in the Upper Peninsula; the Mackinac Mission School, or Sainte Anne School, on Mackinac Island; and the Holy Childhood School of Jesus in Harbor Springs.

“This report, as I see it, is only a first step to acknowledge the experiences of federal Indian boarding school children,” wrote Assistant Secretary of Indian Affairs Bryan Newland, a citizen of the Bay Mills Indian Community based in the Upper Peninsula, who led the investigation. “It notes a desire from people across Indian Country and the Native Hawaiian community to share their individual and family experiences within the federal Indian boarding school system and the resulting impacts today. This report also presents an opportunity for us to reorient our federal policies to support the revitalization of tribal languages and cultural practices. … In turn, we can help begin a healing process.”

The NMU course provides a broad overview of the subject by exploring the Carlisle Indian Industrial School in Pennsylvania, which opened in 1879 as the first government-run boarding school for Native American children and operated for nearly four decades. Hundreds of schools that followed were modeled after Carlisle.

Lindala will deliver the course online via Zoom this fall from 6-9:20 p.m. Mondays. This will be the first time it is offered as a joint class for undergraduate and graduate credit, as well as professional development for teachers. She said it features stories of resilience grounded in both sadness and humor. An example of the former is how children were processed upon arrival at the institutions. They were immediately forced to shed all aspects of their culture and identity—from hair and dress to language—while morphing into someone completely different as dictated by white adults.

Another story relates to a former teacher's testimony. While half of a kindergarten class was locked up in a school jail—a feature in many such facilities, Lindala said—the staff began to hear rhythmic pounding. It turned out that the other half of the class had retrieved a big log from outside and the youngsters pounded through the door to free their peers.

Lindala said students of various tribal affiliations who would not otherwise have interacted with each other bonded in the schools over their shared experience of being placed together in an unsettling environment away from their families. This unifying effect emboldened some to form or join progressive pan-Indian organizations after graduation. One was the 1911 Society of American Indians, established to address problems related to education, health, civil rights and local government.

“Some survivors had favorable experiences at the schools, but the majority did not. That has resulted in deep intergenerational wounds that have played a role in what Indigenous communities look like today,” Lindala said. “For students going into a service-driven profession such as teaching, social work or psychology, having that knowledge of that era and being aware of the lingering consequences can help them better understand and connect with the people they are trying to help.”

For more information on the center and its program offerings, visit nmu.edu/cnas. Read the full Department of the Interior Report here.