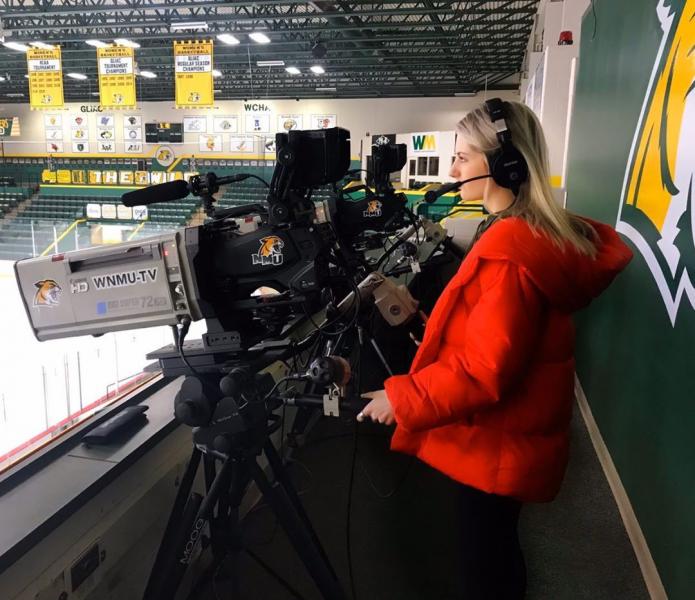 Northern Michigan University will debut a new mobile video production system at this weekend's Wildcat hockey series. The system will enhance the viewing experience for fans in the arena and viewers streaming the game remotely. It will also give NMU students on the video crew experience working with professional-grade equipment.

Anne Ludwig is a multimedia production and public relations double major at NMU and has been working with NMU Athletics for three years. She has been the main camera operator during that period and has also held roles such as director, technical director, graphics creator, audio operator and floor operator.

“As a student employee, this will benefit me because I am using the same equipment I would be using in a professional production.” said Ludwig. “This means that when I graduate, I will be ready for any professional jobs because of this experience. Working with this kind of equipment is something I can put on my resume and will give me an advantage when starting my career.”

Mike Lakenen, producer/director of video and sports, has been working all week with his crew to set up the system. They held a trial run to make sure all of the equipment was in place and ready to go for its debut at the NMU men's hockey series against Ferris State.

“The biggest thing that people will see on the video board is going to be the zoom capability of the new cameras,” Lakenen said. “The zoom capability went from about 12 power to about 72 power. So, what it does is allows us to really focus on one person for different promotional events and give that person time on the video board. We have a pan-tilt-zoom (PTZ) camera that's on the opposite side of the rink, which will be shooting a reverse angle of a lot of the game, giving us more angles than we've had before. We also have a wireless roaming camera that's going to go around with our promotions person so they can be almost virtually anywhere in the arena--even the concourse.”

The original system included three cameras that were moved from the Dome to the Berry Events Center and other venues on campus. Over time, the steady transport increased the wear and tear on the equipment. Those three cameras have been replaced and in the Berry specifically, there are a total of seven lenses in operation with the addition of the PTZ, wireless and two overhead cameras. The new system will stay at the Berry, reducing wear and tear.

“The cost of a system like this would retail for hundreds of thousands of dollars,” said Lakenen. “However, we were able to combine vital pieces of new equipment with other equipment we currently have, and add used equipment from a vendor who specializes in broadcast equipment from around the country in order to leverage our dollars and allow NMU to enter into a total system for a fraction of the cost.” said Lakenen.

The camera portion of the new system came from a company called Allied Broadcast Group, which sells used equipment from NBC Sports, ABC Sports and other entities. Its goal is to find good equipment that can be repurposed.

Lakenen worked closely with Jon Stilson of Filmtools, who built the main console and cabinet for the equipment, to make sure all of the pieces “talked to each other” in order to produce the best content possible. Stilson was eager to assist because of his personal connection to Northern. His daughter, Cam, is a sophomore and member of the lacrosse team.