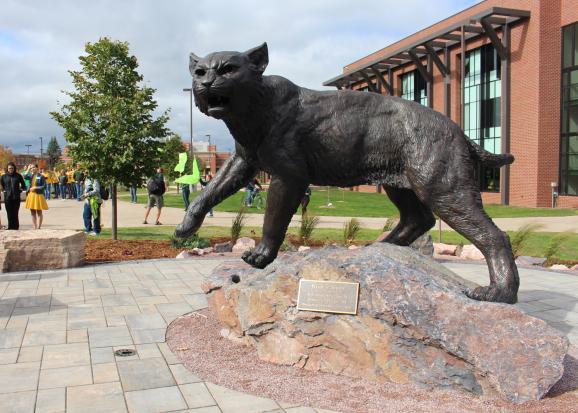 Northern’s new bronze wildcat statue, a much-anticipated addition to the campus landscape, was unveiled and dedicated Sept. 21. It is installed on top of a boulder surrounded by a hardscape patio, creating an impressive gateway to the academic mall and a likely photo location for students and visitors. The statue was made possible through a gift from the estate of former NMU Board of Trustees chair and longtime NMU supporter Gil Ziegler (’60 BS).

“This is a fantastic addition to our campus and our academic mall, where Northern students walk by every day,” Erickson said. “It is a great way to remember one of the most dedicated Northern Wildcats I’ve ever met. Again, thank you for this gift, which will be a gift for generations to come.”

In referencing her dad, Wendy said it was “exciting to leave a legacy to him here.” Kelly echoed that sentiment and added, “We were his first pride. But Northern, outside of family, was his second pride.”

NMU solicited artists who specialize in similar statues and selected Hanlon Sculpture Studio in New Jersey. The cast-bronze wildcat is 12 feet long—nose to tail—and about five feet high. Artist Brian Hanlon said he has created a number of mascot subjects and appreciates each opportunity to do so.

“It’s much more than a piece of art put in place; it becomes a meaningful symbol and destination on campus,” Hanlon said. “Thank you for letting me work with the great team here on this project.”

ASNMU President Cody Mayer said, “This represents unity among the NMU community and will foster tradition from this day on. I’m proud to be part of this historic occasion.”

The statue complements recent horticultural enhancements to the academic core, all funded by private donors: a perennial flower garden that honors former NMU Provost Paul L. Lang Jr.; a contemplative garden that features a pathway to a series of benches framed by trees and shrubs; and more than 180 trees planted throughout the heart of campus.

With all of these additions, Northern continues to transform its campus landscape to promote outdoor activity, quiet reﬂection and an appreciation for natural beauty. This conforms to one of seven core values in the university’s strategic plan: environment. 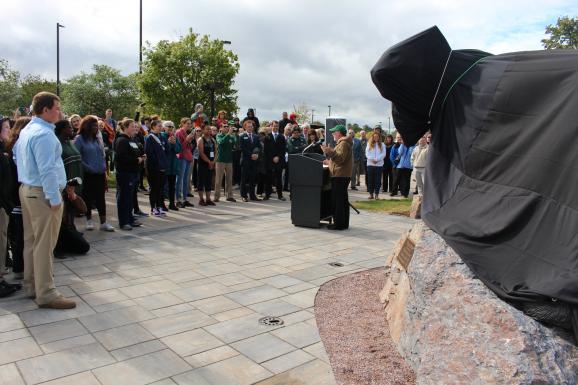 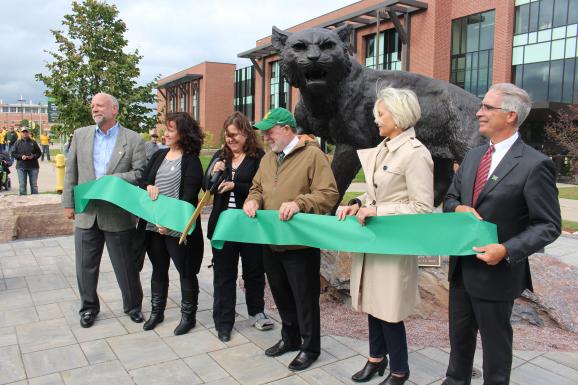