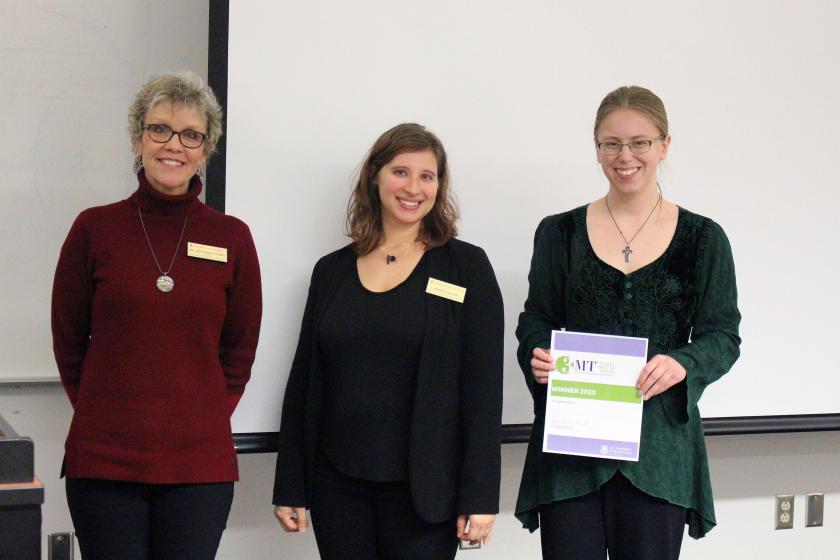 From left: Lisa Eckert and Janelle Taylor of Graduate Education and Research with winner Hernstrom-Hill.

Northern Michigan University has announced the winners of its 3-Minute Thesis (3MT) competition, an annual competition held at about 600 universities in more than 65 countries that gives graduate students the opportunity to showcase their research.

The graduate winner, Madeline Hernstrom-Hill, is pursuing her master's degree in English. Her presentation was titled “Saints and Sinners: Love Between Women in the Middle Ages.”

“I think the Middle Ages are the best time in history,” said Hernstrom-Hill. “They're an age of fascinating light, complex religion, complicated social movement and extraordinary beauty in terms of things like music, architecture and illuminations of manuscripts. It's an endless canvas and, as a lesbian, I was also interested in exploring that aspect within the period.”

Hernstrom-Hill explained the challenges of condensing her 50-page dissertation into a three-minute presentation with only one PowerPoint slide, as required by the competition.

“It has a great deal to do with the context of a medieval genre of a saint's life,” she said. “So in things like what role Eugenia is taking on in this encounter, the context of what it means to be a widow in the Middle Ages, and just the fabric of the saints and erotic desire within the world of saints. I could talk about any of those for hours—there have been books written about them. So trying to just pick out the most important things people need to understand the point I'm getting across was kind of a struggle.”

The runner-up title and people's choice award were presented to Grant Steinacker and Rachael Nelson, respectively; both are graduate students pursuing master's degrees in biology.

Eckert and Taylor with runner-up Grant Steinacker.
Prepared By