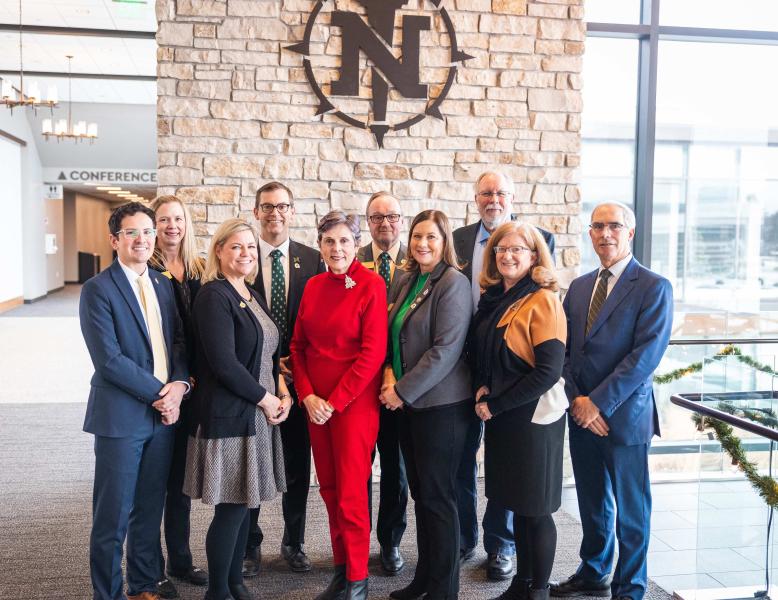 The Northern Michigan University Board of Trustees approved two capital and long-term maintenance projects: a $550,000 budget for the design phase of a science complex research and teaching lab addition budgeted for $11.7 million; and $2.5 million in renovations to Vandament Arena to accommodate both NMU volleyball and basketball.

After a previous tour of existing labs, trustees agreed to invest in expanded space. NMU has contracted with an architect to design an addition to Weston Hall and the Science Building that will house six labs and faculty offices. Meetings with academic departments that will use the lab were initiated in November and will continue into the winter semester. The goal is to begin construction in fall 2023 to enclose the space so that interior work can continue through the winter.

Vandament Arena, already home to Wildcat volleyball and a practice facility for the basketball teams, will be renovated with the funding approved by the board to accommodate basketball home games. The project will create U-shaped stadium seating for 1,700 fans, with some courtside seating and a modernized look.

The basketball teams currently compete in the Berry Events Center, sharing the facility with the Wildcat hockey program. NMU Vice President for Finance and Administration Gavin Leach told the board's finance committee that there have been numerous issues with transitioning the ice sheet to a wooden floor and then back again—sometimes twice on the weekends.

“The transition of the floor is very challenging from a labor cost perspective and getting the labor available to do the work,” he said. “Damage to the floor occurs frequently from inserting and removing it frequently. In addition to the transition costs for labor and damage, the university loses ice rental revenues while the floor is in place and incurs costs for the hockey team to practice elsewhere while the floor is down. Having basketball in Vandament also opens the facility for greater rental opportunities and should create a better fan experience and potential boost in attendance at games.”

“One of the qualitative benefits of this project is athletic recruitment, because student-athletes will be able to practice and play on the same court,” Mahaney added. “There's also the community and regional impact. Northern used to host the regional finals for high school basketball. It was a great way to recruit a general student population to the university. We lost that, but this project may help bring it back. We may never be able to measure all these benefits, but I sincerely feel the return on investment is significant.”

Leach updated the committee on the progress of several facilities projects approved by the board in October 2021 as part of a $90.6 million facilities investment package. Two of those projects, Harden Hall and Northern Enterprise Center, are being considered for consolidation into a potential revised plan, which would include an addition to the south side of Harden Hall rather than the creation of a separate facility. The College of Business and several Arts and Sciences academic departments located outside the academic mall will be integrated into the expanded space.

The existing second and third floors will undergo significant renovation and specialty areas such as All-Campus tutoring, the Writing Center, and the Central U.P. and NMU Archives will be relocated. The College of Business will occupy space on the renovated and expanded third floor, as part of the renovation and addition. New fourth-floor space will be designated for the History/Philosophy, Economics and Political Science Departments.  All three are in Gries Hall, which is scheduled for future demolition in accordance with the campus master plan.

This consolidated project allows the total cost to remain within the originally approved combined project total of $31.6 million. Work on the project will begin in late summer or early fall, with completion expected in summer 2025.

Other upgrades Leach said are proceeding on schedule include: a comprehensive Health and Wellness Center; the Career and Engineering Tech Facility (formerly the Jacobetti Complex); a new facility for the Behavioral Education, Assessment and Research (BEAR) Center; and replacement of the Berry Events Center ice-making system.

In additional action at today's meeting, the board:

- Approved incoming NMU President Brock Tessman's contract, which begins on his start date of Feb. 1 and ends June 30, 2027. He will earn a base salary of $450,000, deferred compensation of $25,000 per year, potential performance bonuses for achieving annual targeted goals and a vehicle. Because the university sold the former president's residence on campus, Kaye House, Tessman will also receive a taxable housing stipend of $50,000 per year.

-Voted to grant outgoing President Kerri Schuiling a $25,000 performance bonus. In making the motion, Board Vice Chair Alexis Hart said Schuiling “is leaving a legacy as a true change agent at Northern” for her leadership on mental health initiatives, the interim strategic plan and other projects and programs she championed. Trustees also adopted a resolution praising Schuiling for her longtime service to the university in various capacities, her professional accomplishments, and her highly productive 18-month term as president.

-Voted to retain the current board leadership of Stephen Young as chair and Alexis Hart as vice chair for calendar year 2023.

-Accepted a gift in kind from the Glenn T. Seaborg family of 69 award medals and his 1951 Nobel Prize in Chemistry, which will be added to a collection of memorabilia and artifacts in NMU's Seaborg Mathematics and Science Center. The board also accepted a donation of seven art prints by Darryl Curran from his personal collection to add to the NMU DeVos Art Museum's permanent collection.

-Approved a policy that all trustees be trained in Title IX compliance and sexual misconduct prevention at least every other year that they serve on the board.

-Adopted resolutions recognizing the contributions of outgoing trustees Robert Mahaney and Tami Seavoy of Marquette, whose terms expire Dec. 31, as well as NMU alumnus Jason Morgan of Ann Arbor, who had to step down after winning a state representative seat in the November election. 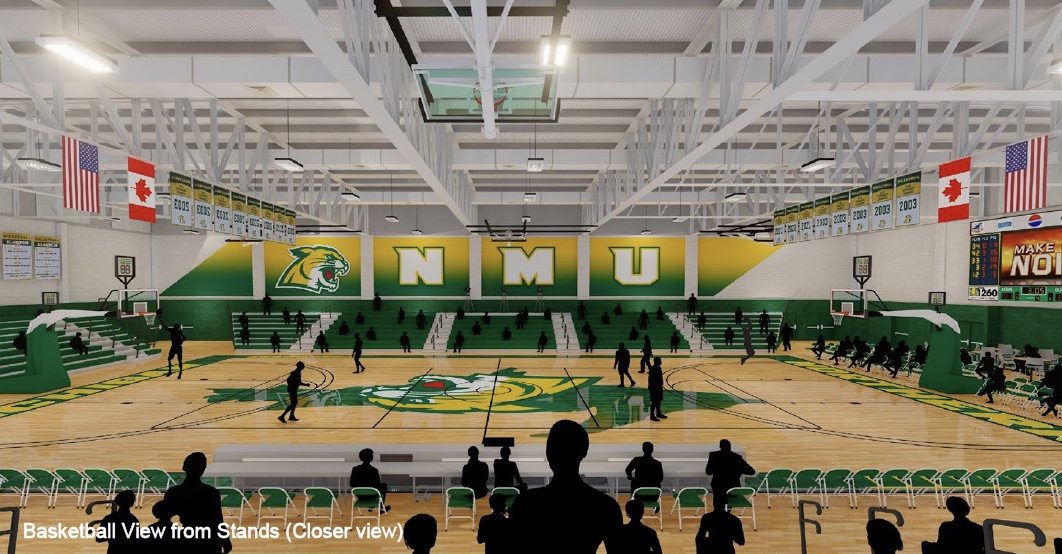 Conceptual rendering of Vandament setup for basketball
Prepared By