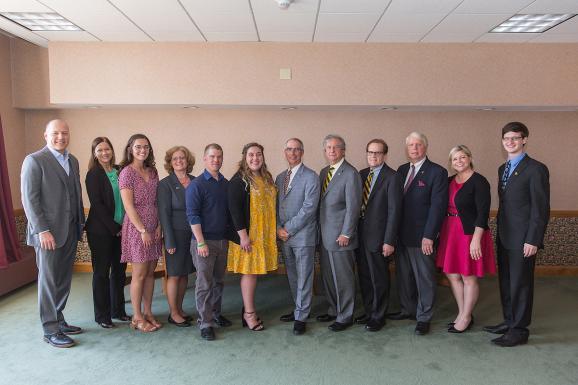 The Northern Michigan University Board of Trustees presented its annual Student Achievement Awards for significant contributions to the quality of life at NMU through extracurricular activities or work in a university department. Recipients were: Meghan Hohenstein of Bloomington, Minn., Outstanding Female Graduating Senior; Adam Kall of Davenport, Iowa, Outstanding Male Graduating Senior; Samantha Black of Caledonia, Mich., Outstanding Student of Any Class; and Joseph Roberts, Outstanding Nontraditional Student. Michelle Gardiner, who will be relocating from Texas to Germany with the U.S. Air Force, received the new Outstanding Global Campus Student award.

Hohenstein is the first nursing student to graduate with Full Honors. She came to NMU as a Leadership Scholar and completed a bachelor’s degree with a double major in nursing and Spanish in four years while also participating in the Honors Program. She was active in house and hall government and Mortar Board, completed all four edges of the Superior Edge program and was involved in the Student Nurses’ Association and Spanish Club. Hohenstein joined NMU’s Student Leader Fellowship Program and led a negotiation and problem-solving program for impoverished girls in the Dominican Republic as her community service internship. She won the Heart and Soul Award for campus leadership. She studied abroad in Salamanca, Spain and in Cusco, Peru, where she volunteered at a hospital while taking classes. Hohenstein also helped to set up pop-up health clinics in Belize. After graduating magna cum laude on May 5, she will be studying for the nursing boards and hopes to be a labor and delivery or pediatric nurse.

Kall also came to NMU as a Leadership Scholar and earned a bachelor’s degree with a double major in mathematics and computer science. He was a member of the Student Finance Committee since his first semester. As a freshman, he formed a team to compete at the Alma College Math Challenge and its final ranking improved significantly in subsequent years. Kall was selected for a 2016 summer internship at the NASA Goddard Space Flight Center in Maryland.  He created an Artificial Intelligence to parse and read computer logs. At NMU, he completed the entire Superior Edge program and the Student Leader Fellowship Program. His SLFP community service internship was working with the Robogators, the robotics team at North Star Montessori Academy in Marquette. Kall worked at two Iowa companies on projects such as applied swinging-door compression algorithm to data flows. He created a machine-learning algorithm for the NMU Foundation. After graduating summa cum laude with a 3.9 GPA, he will pursue a master’s degree in data science at Elmhurst College.

Black was a nursing major and has been inducted into the International Nursing Honors Society. She was a member and leader of the Student Nurses’ Association, completed all four edges of the Superior Edge Program and was involved in Mortar Board and the Student Leader Fellowship Program. For her SLFP community service internship, she worked with Father Marquette Middle School to establish an after-school girls club for 5th-8th graders. Black traveled to Belize to work at pop-up health clinics.  She also worked at a summer camp for at-risk girls in the Dominican Republic. Her local volunteer involvement included UP Health System-Marquette, Jacobetti Home for Veterans and the health clinic at Ishpeming schools. She also played a major role coordinating the campus Organ Donation Drive, leading NMU to a second-place finish among Michigan colleges. After graduating cum laude, Black will study for the nursing board with the goal of becoming a labor and delivery nurse in lower Michigan.

Roberts had earned a technical diploma in farm operations and toiled away at general education classes in Wisconsin before enrolling at NMU in January 2015 as an accounting/corporate finance major with a minor in math. He was the site coordinator for the accounting Volunteer Income Tax Assistance (VITA) program, which completed more than $1 million in tax returns for low-income Marquette residents, free of charge. He also led the Student Managed Investment Fund, which manages a portfolio of stocks for NMU. Roberts was a member of the Dean’s Advisory Council and helped to plan many events for the College of Business.  He was a leader of NMU’s chapter of Beta Alpha Psi, an international honor organization for financial information students and professionals. He also completed the Student Leader Fellowship Program and volunteered at Trails Fest and the Noquemanon Ski Marathon for his community service internship. After graduating, Black will work at public accounting firm Schenck SC in Wisconsin.

Gardiner began taking courses at NMU more than 20 years ago when she and her husband were stationed at the former Sawyer Air Force Base. She couldn’t continue her education when they transferred out of the area because NMU didn’t offer online courses at that time. After interrupting her military service to raise her children and operate a daycare center, Gardiner re-entered the Air Force in 2008. She currently works as a personnel specialist and is a senior master sergeant, the second-highest enlisted rank. She managed to finish her associate degree in general university studies/sociology in 2014 through online courses. As the NMU Global Campus program really took off, Gardiner saw a path to finally finishing her undergraduate degree. She will be moving to Germany his summer, while taking her second to last class, and plans to graduate in December with a degree in applied workplace leadership.