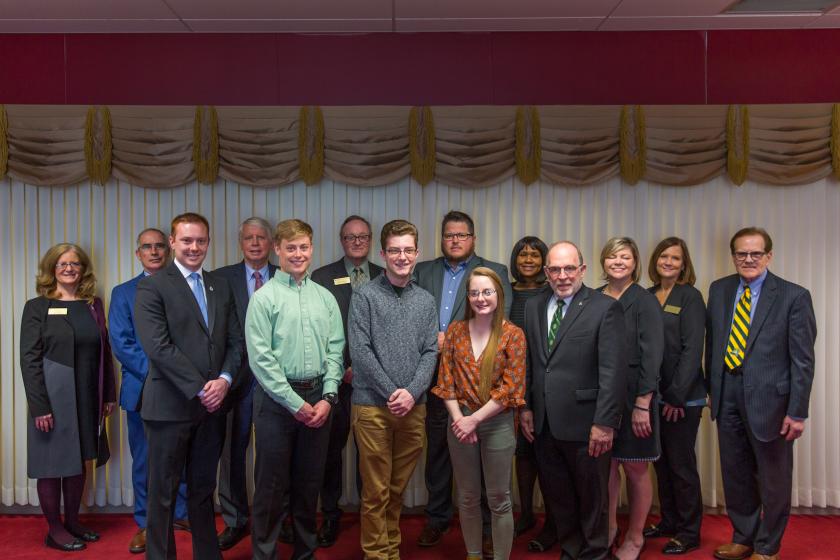 Donohue began studying at NMU in 2015 as a Harden Scholar recipient and completed her bachelor's degree in applied behavioral analysis in four years while participating in the Honors program. Donohue joined the Superior Edge program in her first semester and has completed all four edges. She joined the Student Leader Fellowship Program in 2017, where her internship was at STAR Children's Bereavement Services. She coordinated the Best Day Program, monthly activities for children who are grieving the loss of a loved one. Donohue has traveled to Morocco, where she spent three months as a volunteer, instructor and aide in a classroom for physically and intellectually disabled children. Donohue has been actively involved in Best Buddies, the Psi chi honor society, Mortar Board, and the Global Ambassador Program. She has been a Volunteer Resident Advocate at Harbor House and a member of the Rotary Club of Marquette. Donohue will graduate summa cum laude with Full Honors on May 4.

Stramm came to NMU in 2015 and became a member of the Pride of the North marching band. He has kept this up all four years and served as the president this past fall season. Michael also got involved in other campus activities, such as house and hall government in defunct residence halls Payne Hall and Halverson Hall. He worked on the Relay for Life Planning Committee for three years, working his way up to co-chair of the event. He completed the Superior Edge program, was involved in the Student Leader Fellowship Program, is a member of the Mortar Board and was on the ASNMU referendum committee. Stramm went on a service trip to New Zealand, where he helped at five service sites doing environmental work. He currently works in the Center for Student Enrichment as the Leadership Programs Coordinator. Stramm will graduate magna cum laude as a forensic biochemistry major on May 4.

Watling began studying at NMU in 2015 as a member of the Honors program. He will graduate magna cum laude on May 4 with a bachelor's degree in neuroscience and Spanish. Watling has bene involved in the Honors Organization, South Superior Climbing Club, and Hunt Hall government. He also served as the resident advisor in Hunt Hall and an inaugural resident advisor in Cedar West. Watling completed the Student Leader Fellowship Program. His SLFP internship was developing, organizing and implementing the NMU Trailhead project on campus. Watling founded and managed a non-profit organization centered on storytelling around the Great Lakes. He bicycled 1,400 miles in 17 days with two other NMU students to record and share an oral history from people who live on the shores of Lake Superior. Watling studied abroad in Chile for four months. He worked in the NMU Cognitive Affective Behavior and Integrative Neuroscience (CABIN) lab as a member of a research team. This culminated in a presentation of a poster at the Midwest Psychological Association Conference entitled: “Sex difference in error-related electrocortical activity and anxiety-related symptoms.” Following graduation, Watling will join the Peace Corps and work in the Dominican Republic starting in August.

Loftus began studying at NMU in 2015. He is considered a non-traditional student because he's older and has had more life experience than traditional students. He is a Navy veteran and father. Loftus has been very involved in ASNMU. He started as an off-campus representative and chair of the Student Affairs committee. As such, he decided that students needed a food pantry. He formed a committee of administrators and students and the NMU Food Pantry in Gries Hall opened one year later. Loftus served as a student representative on the Academic Senate. He presented the resolution for recognizing Indigenous Peoples Day. He has been the vice president of ASNMU for 2 ½ years. He is also an active member of the Student Veteran Association and Gamma Theta Upsilon, the NMU chapter of the international honor society in geography. Loftus will be working for the Forest Service in Hiawatha National Forest this summer and is slated to graduate in December with a bachelor's degree in fisheries and wildlife management and a certificate in geographic information systems.

Store returned to school because, as a working professional, he could take classes online through the Global Campus program. Store is the executive director of the Portage Health Foundation in Houghton, Michigan and last summer, Houghton was hit with a devastating flood in June. The Portage Health Foundation took a lead role in the flood recovery efforts. The Foundation is made up of five employees, led by him. This group raised nearly $950,000 and assisted numerous victims with general clean-up, mold mitigation, home repairs, and complete home replacement. They have also supported the provision of mental health counseling and other human services for the victims.