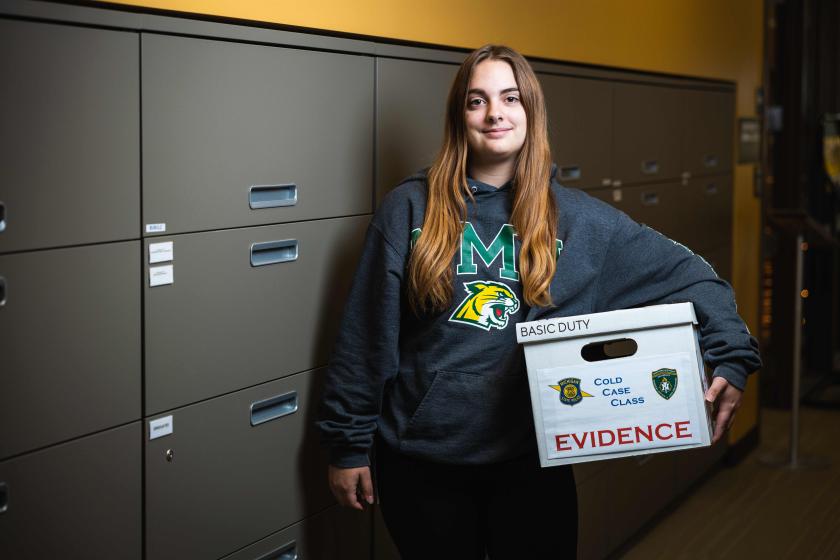 Student Autumn Combs with a box of case materials

Northern Michigan University students enrolled in a new course this semester had to interview for a spot on the limited roster, undergo a background check and sign a non-disclosure agreement. They also lock up their cell phones and laptop computers before they enter the associated classroom/lab, and pore over materials retrieved from a storage room that was re-keyed for restricted access. Such precautions are necessary because the students are tasked with re-examining and digitizing the entire file for an actual Upper Peninsula cold case that began as a missing person's report and shifted to a homicide.

“It's such a valuable experience for students to be able to give a real cold case a fresh look before they start their careers, with the potential to solve it or create actionable leads to move the investigation forward,” MacMaster said. “That's also a win for law enforcement and the victim's family. Another component is the full digitization of the case file, which is a major undertaking. This will create immediate access to any element. Literally from their cell phones, detectives can review photos, lab reports, interview statements and police reports from multiple agencies.”

Most details of the case cannot be disclosed publicly during the ongoing investigation. Campbell could only divulge that the homicide happened many years ago.

“Even though one fairly good suspect was identified, it's important for students to look at the big picture and not get hyper-focused on one person,” Campbell said. “Our hope was that the students would uncover details that might bolster the case and they've offered excellent leads. We intentionally wanted students from other fields beyond criminal justice in this class, so there are forensic biochemistry, anthropology and psychology majors as well. I've really appreciated how they're looking at the case. When you get different perspectives together, it creates a lot of good conversation. Having that vast knowledge base has been helpful.”

Campbell presented an overview of the MSP and its protocols during the initial session, then students spent the first weeks reviewing copies of police and lab reports that spanned decades to see the trajectory of the case as it unfolded. “It was good to see how investigations evolve over time with advances in technologies, like DNA, and different strategies,” said Aidan Pascoe of Marquette, one of eight students in the class. They also analyzed lists and photos of evidence, rather than the original items, to preserve the chain of command.

“It was an eye-opener to see the different perspectives and connections you'd need to make for the case to move closer to being solved,” said Autumn Combs, a criminal justice major from Spring Lake Park, Minn. “We all have different abilities. I specialize in photography, so that's where I came in, helping to enhance old 35mm photos. My ultimate career goal is to be a forensic photographer or part of a cold case unit.”

“We all learned to pay special attention to the details and to be more diligent about reading with a fine-tooth comb,” added Abigail Boozer, a criminal justice and psychology major from The Woodlands, Texas. “It was important to hone our reading comprehension skills. Rather than reading as a whole on first glance, we needed to narrow our focus so that little things wouldn't get overlooked. And we learned it's important to keep an open mind to all evidence so it's not misconstrued.”

Students spent about 1,000 hours in the lab, which Campbell said equates to roughly six months that it would take a detective to work through a case alone. The later stages of the class have focused on digitizing records. Grouping everything together in a searchable database streamlines efforts to find corresponding information and potential connections.

“Organizing, digitizing and indexing a cold case file are three tasks required to properly reopen an investigation, but they can take months for one detective to accomplish,” Campbell said. “The lack of available personnel and resources has stopped previous attempts to address the cold case backlog we have. Through this partnership with NMU, these tasks have been completed in a fraction of the time by the students this semester, and at no cost to the Michigan State Police.”

Similar collaborations between law enforcement and higher education are becoming more common, particularly after Western Michigan University's cold case program garnered national media coverage for helping to solve the 1987 murder of Roxanne Wood in her Berrien County home. The case resulted in a conviction and was featured on a recent edition of 48 Hours on CBS.

“Rather than reinvent the wheel, we reached out to our counterparts at WMU and MSU for guidance on the initial planning and format for this type of course; they were very helpful,” MacMaster said. “Northern also had to develop its own secure private network that would be in compliance with State Police requirements. The private network is only accessible to students and the instructors.”

The cold case class is scheduled to make a presentation on the partnership and progress to the NMU Board of Trustees' academic affairs committee, which meets at 9 a.m. Friday, Dec. 16, in the Northern Center.

Both MacMaster and Campbell hold Master of Public Administration degrees from Northern. Campbell also earned a bachelor's degree in criminal justice and worked for NMU Public Safety before joining the MSP. They will team again in January to introduce a new cold case—one of 23 dating from the 1970s to 2010 that remain open in the Upper Peninsula—to a new group of students. 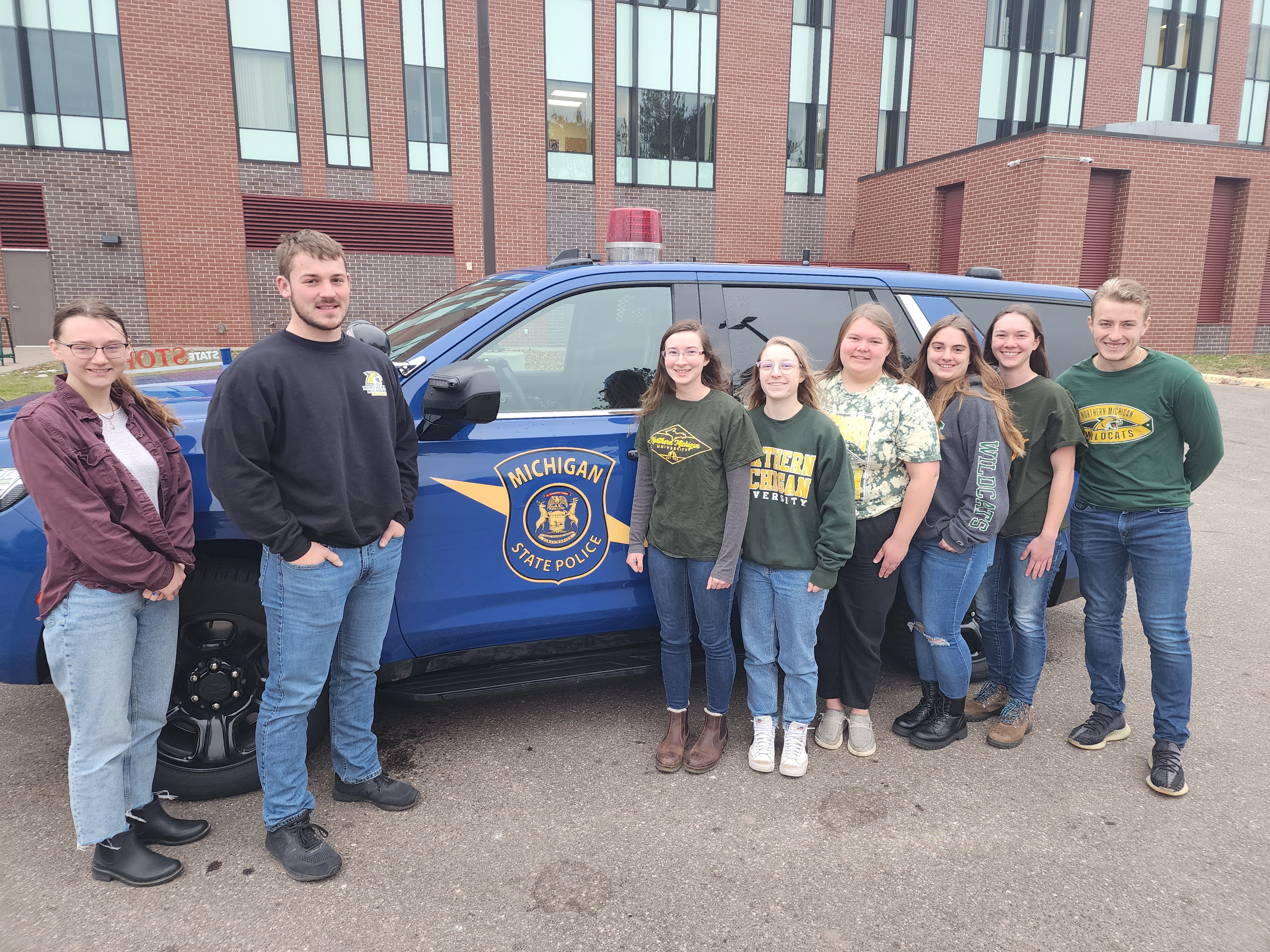 Cold case students in front of an MSP vehicle
Prepared By