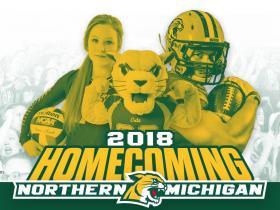 Northern Michigan University's 2018 Homecoming celebration will feature a full slate of activities for alumni and community members Sept. 18-22. Three special additions this year include a community-wide ice cream social, the unveiling and dedication of a new Wildcat statue on campus and the premiere of a documentary on the 1975 national champion football team. The following events are free, unless otherwise indicated.

“Here’s the Scoop,” an ice cream social for the NMU and Marquette-area communities, is scheduled from 5-7 p.m. Tuesday, Sept. 18, on the University Center lawn. The family friendly event will feature free ice cream, entertainment and games by Double Trouble DJs, appearances by Wildcat Willy and NMU President Fritz Erickson and other activities and giveaways.

A public dedication ceremony for a new bronze Wildcat statue near Jamrich Hall will be held at 3 p.m. Friday, Sept. 21. The statue will become a focal point on the academic mall and is likely to serve as a popular photo location for students and visitors. It is made possible through a gift from the estate of former NMU Board of Trustees chair and longtime NMU supporter Gil Ziegler (’60 BS).

The premiere of Put Your Hand on the Line, a documentary on the 1975 NCAA Division II national champion Wildcat football team, will follow at 4 p.m. Friday in Forest Roberts Theatre. Some members of the team will attend the showing.

The NMU Sports Hall of Fame social, program and dinner is scheduled at 5 p.m. Friday in the University Center Great Lakes Rooms. Tickets can be purchased at outlets or online for $25 for the general public or $10 for ages 10 and under. This year’s inductees are Richard “Dick” Allen, football; Tim Jones, wrestling; John LaPointe, football; Heather (Mizer) Sarnowski, volleyball; the late Kim (Storm) Ylitalo, swimming; and the 1997-98 women’s basketball team.

An all-alumni reception, with complimentary appetizers, music and NMU trivia, is scheduled from 7-10 p.m. Friday at the Landmark Inn.

Saturday will kick off with family-friendly community activities at NMU’s Olson Library: a Michigan eLibrary Bookflix Storytime from 9-10 a.m.; Bagels & Books, 9-11 a.m.; a poetry workshop for kids from 10-11; and large-scale versions of favorite board games from 11 a.m. to 1 p.m.

The annual Homecoming parade will be held on a new day and traverse a new route. It begins at 2 p.m. Saturday from the back of the Superior Dome and will head down Front Street, turn right at Hewitt, then return up Third Street.

A tailgate party featuring music, lawn games and an optional BBQ buffet for purchase will be held outside the Dome beginning at 1:30, leading up to the 4 p.m. football game against Ferris State. A post-game reception with free food, a cash bar and music by Iron Daisy will close out the Homecoming celebration at 7 p.m. Saturday at the Holiday Inn.

For the full schedule and more information, visit nmu.edu/alumni/homecoming.