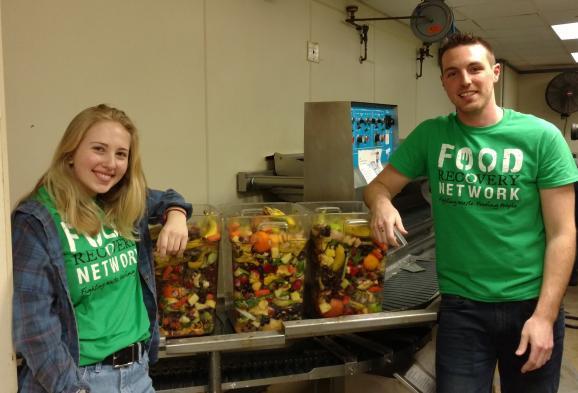 Northern Michigan University is home to the first official U.P. chapter of the Food Recovery Network, a nationwide student organization that recovers perishable food from campus dining facilities and donates it to people in need. The NMU Food Recovery Network delivers leftover food from NMU Dining locations to the Warming Center in downtown Marquette—an appropriate cause to highlight as Hunger and Homelessness Awareness Week approaches. The student group will begin an awareness initiative next week related to the water footprint of food.

On average, the NMU FRN saves about 30 pounds of food each week, with one recent recovery weighing in at over 165 pounds in late September. Last year, the student organization rescued well over 1,000 pounds of perishable food items on campus. This is part of ongoing efforts by the FRN to reduce the ecological footprint of the university.

“One of the most pressing concerns society faces today is the need to lighten our impact on the planet by using resources more responsibly,” says Joe Dodd, president of NMU Food Recovery Network and senior economics and environmental studies major. “Many colleges across the US are beginning to strive toward sustainability on campus, searching for practical ways to reduce losses and maximize efficiency.”

Last year, the FRN conducted three different “food waste audits” at the former Marketplace dining hall (MP), now The Lights. The study found that, on average, diners at the MP threw away about 500 pounds of food every day, 20 percent of which was compostable material such as raw fruits and vegetables that could be diverted to the NMU Hoop House to reduce disposal costs. The research project took first place in the undergraduate upper-division category of the 2018 Celebration of Student Scholars competition last May.

Dodd says raising awareness of food waste on campus could help students recognize some of the underlying costs of producing their meals. “By making small adjustments in their everyday food habits, students can drastically reduce their impact on the environment and help eliminate food insecurity at the same time.”

Food recoveries, waste tracking and analysis are all practical tools that can help the university recognize dining patterns and identify opportunities to minimize unnecessary costs, he added. These tools may also improve NMU’s Association for the Advancement of Sustainability in Higher Education (AASHE) STARS rating, which is used for colleges and universities to measure their performance in sustainability.

“As an institution of higher learning, it is important that NMU demonstrates both environmental responsibility and sound business practices on campus by exercising water and energy conservation and actively reducing waste.” says Dodd, “Our focus aligns with multiple goals in the NMU 2020 Sustainability Plan.”

Each year, almost 40 percent of food produced in the U.S. is left uneaten (133 billion pounds), making food the single largest component in our waste stream today, according to EPA statistics Dodd provided. When food is lost, valuable resources such as fresh water, land, energy and labor invested into producing, distributing and preparing the food are lost as well, he added. U.S. food waste, valued at $166 billion per year, accounts for 25 percent of our nation’s freshwater consumption and is responsible for 20 percent of all methane emissions.

To find out more about NMU FRN, email foodrecoverynmu@gmail.com, or attend the next biweekly meeting in Magers Hall lobby on Sunday November 4th at 7pm.