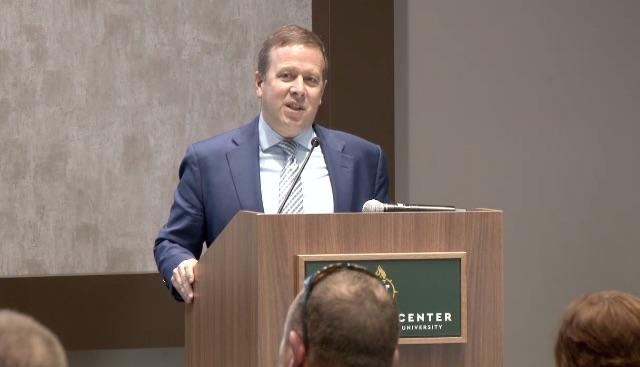 Leach at the forum

“We're not in crisis mode at all; we're not looking at budget cuts,” Erickson said. “But we're looking at how we continue to move forward and make investments in the innovative things happening on campus. We're doing the kind of analysis now that allows us to say, ‘We're going to take dollars from here and put them here.' There are programs that have grown and developed and need more resources. There are others that, in the ebbs and flows of an institution, may have more than they need right now. We need to have that campus dialogue in the coming weeks and months about developing financial models that will make more investments possible.”

For the current fiscal year, NMU received a 1.9% ($910,000) funding increase from the state. Leach said 0.5 % is earmarked for operations cost increases. The remaining 1.4% is the required reimbursement for the Indian Tuition Waiver. NMU abided by the tuition restraint language in the state budget bill, avoiding any penalties and remaining the second most affordable university in Michigan.

Gavin Leach, vice president for Finance and Administration, said the two primary sources of funding for operations are state appropriations and tuition revenue. In 1989, state funding accounted for 74% of the general fund budget. By fiscal year 2019, it had fallen to 35%, putting significantly more pressure on the tuition component. Leach also gave an actual dollars comparison. Last year's state appropriation of $48 million for NMU was below the 2002 funding level of $52 million.

“The university has consistently controlled its costs over the past decade,” Leach added.  “Since 2011, the university's general fund operating costs have increased less than the rate of inflation at an average of 1.1% per year.  Some of that was driven by enrollment declines, but overall the institution has been adapting to changes in funding and focused on maintaining affordable tuition for the students at second-lowest in the state.”

Another challenge faced by NMU and other state universities is the unfunded, state-mandated liability associated with the Michigan Public School Employees' Retirement System, or MPSERS. Costs associated with the program's underfunding have been allocated to the seven universities that were required to be part of MPSERS. The unfunded liability being recorded was in part due to changes in accounting rules, Leach said. New enrollments in the program ended in the mid-1990s, but the financial impact will linger for several years.

“We still have employees in it; that number's dwindling, but we have the unfunded piece of that liability that's accrued over the years. We're required by the state to provide additional dollars to maintain that fund to ensure solvency long-term. They recently agreed on a schedule of capping what that liability is for the universities. This process took about four years negotiating with the state to achieve that cap.”

The unfunded liability paid by NMU to help fund the system will increase 2% per year under the cap. It was $5 million this year and will be $7.2 million in the final year of 2036. 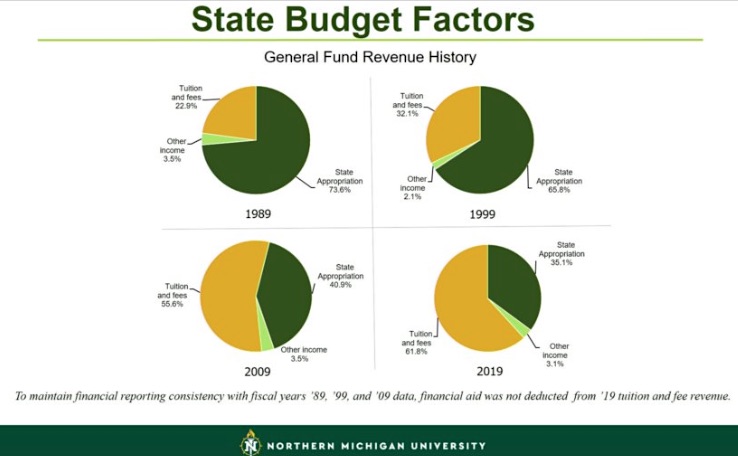 One slide showed the shifts in revenue sources over 30 years.
Prepared By