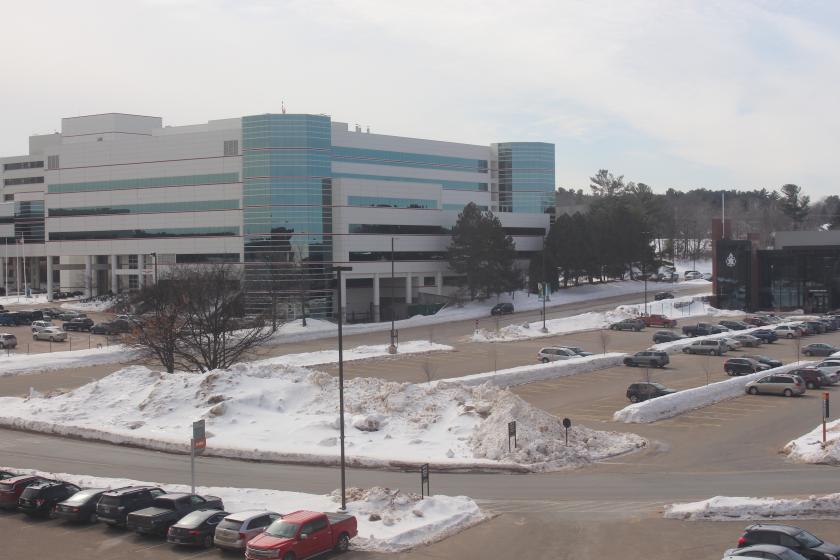 A portion of the former hospital complex across the street from NMU's Northern Center.

The Northern Michigan University Foundation has issued an open Request for Qualifications (RFQ) for prospective master developers interested in revitalizing the former hospital property adjacent to the NMU campus. This action was taken following a period of due diligence to assess the feasibility of enabling a significant mixed-use development to proceed.

"The NMU Foundation is serving as a catalyst to assemble the partners and resources necessary for the project to be viable," said John List ('84), president of the NMU Foundation Board of Trustees. "We are encouraged by the progress to date, and look forward to responses from all interested parties."

On Aug. 16, 2021, the NMU Foundation and UP Health System - Marquette (UPHSM) entered into a non-binding Letter of Intent, envisioning a “win-win-win” scenario that would result in demolition of the current site and preparations for redeveloping the site in a manner that provides mutual benefit to NMU, the City of Marquette and residents. Primary terms of the LOI were memorialized in a Sept. 28 Contract for Sale of Real Estate, which is subject to the NMU Foundation's satisfactory review of environmental due diligence and overall feasibility of the project.

The NMU Foundation's focus since entering into its agreement with UPHSM has been to evaluate the full spectrum of possibilities and potential challenges associated with redeveloping the site, including environmental due diligence, the feasibility and cost of site preparation, and the financial and practical feasibility of redeveloping the property in a way that benefits the Marquette community, its citizens and NMU.

The Marquette Brownfield Redevelopment Authority authorized an investment in the NMU Foundation's environmental due diligence on Oct. 21, 2021, including a Phase I and Limited Phase II Environmental Assessments and a Hazardous Materials Survey for the site.  Findings revealed that no immediate response activities are required.

Concurrent with the due diligence activities and beginning the process of securing a master developer partner, NMU Foundation has been working with the City of Marquette, Marquette Brownfield Redevelopment Authority, and State of Michigan entities to facilitate a collaborative approach for offsetting the cost of site preparation, including the demolition of buildings at the site.

On Feb. 28, the Marquette City Commission unanimously authorized a Memorandum of Understanding to formally support the project and establish the framework for a brownfield redevelopment plan, in partnership with the NMU Foundation and Marquette Brownfield Redevelopment Authority. The entities plan to finalize the framework in May prior to the expiration of the NMU Foundation's evaluation period under its agreement with UP Health System - Marquette.

A special ad-hoc committee of the NMU Foundation Board of Trustees being chaired by List is overseeing the vetting and selection of prospective master developer partners. The RFQ submission deadline is April 8, 2022, with selection of a developer targeted for early May.

Public information sessions are also being planned before the RFQ submission deadline. Additional community engagement opportunities will evolve after a master developer is selected.

For more information regarding the RFQ, visit https://foundation.nmu.edu/.