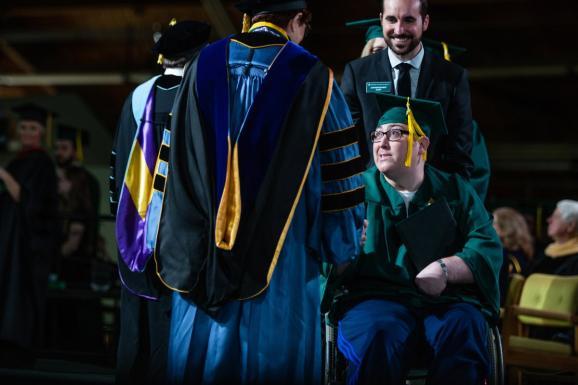 Eleven years after a stranger savagely beat him with a pool stick outside a bar and left him for dead, Travis Thetford crossed the NMU commencement stage in his wheelchair Dec. 15 to accept his diploma. The former star athlete at Escanaba High School suffered a traumatic brain injury and left-side paralysis in the wake of the attack. He has since inspired many with his perseverance and positive attitude in tackling adversity. As Thetford prepares to embark on his next goal—“hardcore” physical therapy with a fierce determination to walk again—he reflected on the responsive support he received at Northern en route to his bachelor’s degree in management of health and fitness.

“I’m a strong person, but I can’t take all of the credit,” said Thetford, whose nickname is T-Dawg. “God bless the people behind me. I had a lot of help along the way from family, friends and the people at NMU.”

“He was a joy to work with and we’re all going to miss him very much,” she said “One thing I would especially note about Travis is that he’s just so positive and was always genuinely appreciative of the assistance we provided. That’s what we’re here for, but he was always so kind in expressing that. Travis was a hard-working, committed student and such a positive presence when he would stop by.”

Public Safety Director Mike Bath helped to arrange door-to-door transportation for Thetford across campus via Marq-Tran. Four days each week, a bus picked him up from his residence hall, Magers, and shuttled him between buildings where his classes were held.

“After the previous campus shuttle for all students was discontinued because of low ridership, we knew there were still some individuals with mobility issues who needed assistance,” Bath said. “When we partnered with Marq-Tran to start a Friday shopping shuttle, we got extra ride tickets and worked with Disability Services to distribute them to Travis and other students who required help getting around. We would help him schedule that, if needed. Travis invited me to his graduation reception. I had a chance to meet his parents and give him an NMU police hat embroidered with his name. What an amazing accomplishment for him.”

Thetford said Peter Holliday in Student Support Services served as his adviser throughout his studies, ensuring he scheduled the required courses in the semesters they were offered to complete his degree most efficiently. He described Barb Coleman in the School of Health and Human Performance as an “awesome” professor.

“There were a lot of other people who helped me—too many to mention,” Thetford said. “I had a very good team around me.”

Sports expressions surface in conversations with Thetford for good reason. He was a multi-sport athlete in high school and first enrolled at the University of Arkansas to study kinesiology.

“I was always fascinated with health and the human body. Before my attack, I was a gym rat with 3 percent body fat. I was quick, could bench press 325 and could play many sports, from track to ping pong.”

After a few years in Arkansas, Thetford said he felt lost. He joined his parents in California and worked for his dad, who was a set decorator for TV shows. It was during a weekend camping escape to Big Bear that the stranger whacked him repeatedly on the head, cracking his skull in three places and disrupting the pathway from his brain to the left side of his body. He said he was in a coma-like state for eight months. Eventually his family returned to the Upper Peninsula. Thetford attend Bay College for a year before transferring to NMU.

“I try to focus on what I can do, not what I can’t,” he said, in describing his journey toward graduation. “Some of my friends from Arkansas came up for the ceremony. I felt every emotion that day. I was nervous, excited and happy.”

After intense physical therapy “to get walking,” Thetford said his plan is to either share his inspiring story as a professional motivational speaker or work in the health and fitness arena with individuals with physical disabilities.

While attending NMU, Thetford served as a volunteer at Beacon House—giving back to the facility he once stayed at for an extended period as a guest while receiving therapy from U.P. Health System-Marquette. To read an extensive feature story on Thetford’s injuries and rehabilitation, written by a Beacon House staff member, click here. 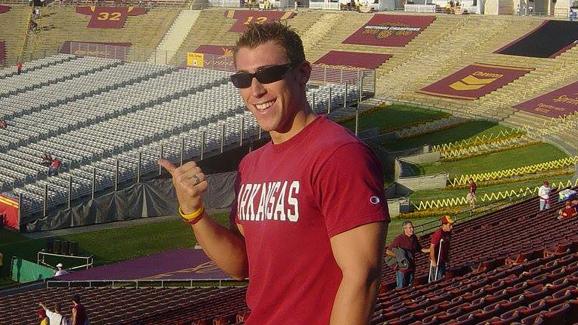 Travis in Arkansas before the attack 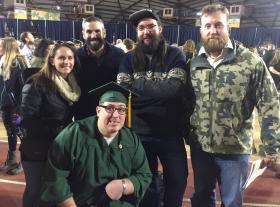 Travis with friends after the ceremony
Prepared By